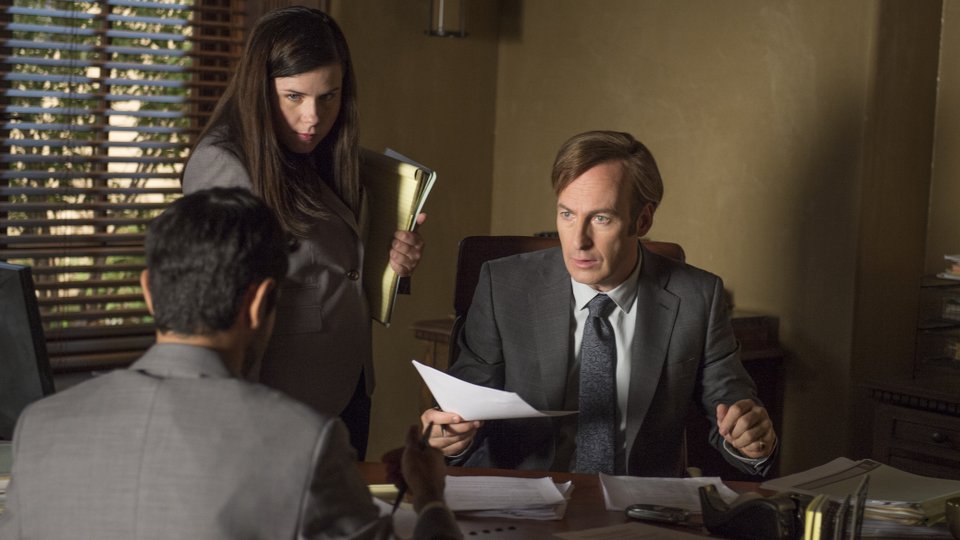 Jimmy McGill (Bob Odenkirk) has a decision to make in the opening episode of Better Call Saul. With an employment offer from Davis & Main on the table, courtesy of Kim (Rhea Seehorn), Jimmy needs to decided whether to keep his sketchy law firm in operation or go legit by taking a job at a leading legal firm. It’s not an easy decision for the slippery lawyer and glimpses at the future, along with the knowledge that Jimmy eventually becomes Saul Goodman, suggests that the legit road isn’t one he’ll be taking for a particularly long period of time.

Better Call Saul: Season Two features 10 episodes and focuses on Jimmy’s struggle between doing the right thing and acting on his gut instincts. On the one hand Jimmy wants to go legit so he can truly be with Kim but the restrictions of working in a proper law office make him feel suffocated. On top of that Jimmy is forced to work with Hamlin, Hamlin & McGill (HHM), the firm he used to work for when he takes on the case of a retirement home whose tenants are being ripped off.

Knowing who Jimmy eventually becomes thanks to Breaking Bad, season two has a tough job on its hands in terms of creating a world where going legit is a serious consideration for Jimmy. Obviously we all know how things turn out but it makes for interesting viewing as you watch Jimmy trying to go against his very nature. The central case of the season is an engaging one and due to Jimmy’s conduct he puts Kim in the line of fire and takes his relationship with his brother Chuck (Michael McKean) past the point of no return.

Supporting the main storyline surrounding Jimmy, Better Call Saul does a better job of fleshing out Mike’s (Jonathan Banks) character during season two. At the start of the season Mike is still working for Pryce (Mark Proksch) which lands him squarely in the sights of Nacho (Michael Mando). Through Nacho, Mike becomes embroiled with Hector Salamanca (Mark Margolis), who of course was an important character in Breaking Bad.

This season sees more of an exploration of Kim too. The seemingly straight-laced lawyer gets drawn more into Jimmy’s world and it’s interesting to see how to she copes with and reacts to it. Kim’s neck is on the line after getting Jimmy the Davis & Main job and she makes a pretty huge decision that will impact the rest of her career by the season’s end.

As always it’s the performance of Bob Odenkirk that leads Better Call Saul. He has a magnificent screen presence and he manages to make you root for him, even when he’s doing pretty despicable things. Odenkirk knows how to make Jimmy relatable and human, despite him often questionable actions. Even when Jimmy goes too far in terms of pulling the wool over his electricity terrified brother, you still want him to succeed. It takes a special kind of actor to achieve that and Odenkirk is wonderful.

The Blu-ray release contains lots of exclusive special features including conversations with Jonathan Banks and Mark Margolis, behind-the-scenes featurettes, and commerical’s that Jimmy makes during the course of the series. There are also cast and crew commentaries on every episode as well as a gag reel.

Better Call Saul really comes into its own with its second season. There’s a more cohesive and stronger narrative than the first season. The performances are remarkable across the board and it ends on a hell of cliffhanger that makes me want season 3 to just hurry up and get here. With season two Better Call Saul moves out of the shadows of Breaking Bad and establishes itself as a show on par with its parent. I’m expecting season 3 to be the show’s finest yet.