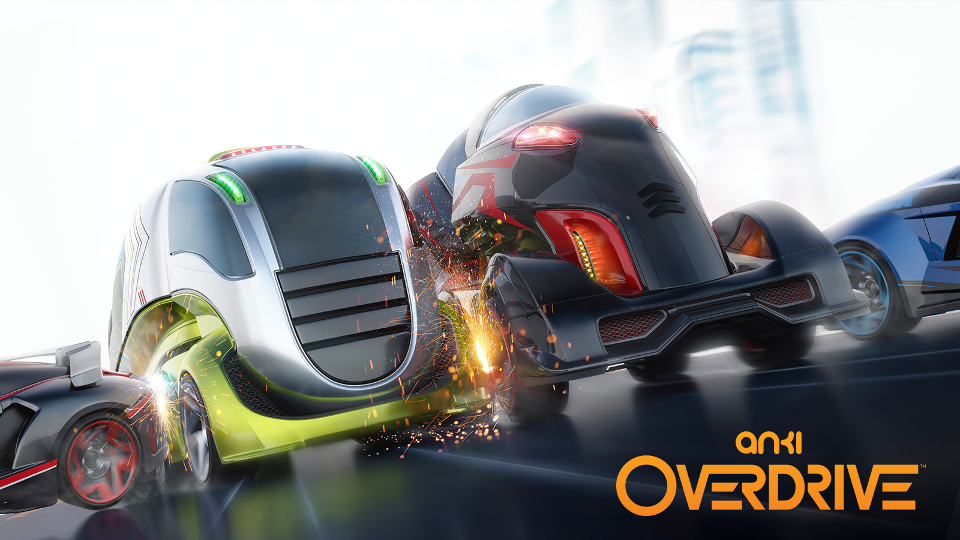 I was completely blown away by Anki Overdrive when I got my hands on it last year (read my review). It took the concept of Scalextric, one of my favourite childhood toys, and evolved it into a futuristic version with robotic vehicles. Even after a year it still amazes me each time I play and I’m just a couple of years away from the big 40.

Supertrucks are the big new addition to Anki Overdrive this year. There are three to choose from – X52, Freewheel and a limited edition X52 ICE exclusive to the UK and Republic of Ireland at Smyths Toys Superstores. They live up to their name coming in at nearly three times the size of the original Supercars.

For those not familiar with Anki Overdrive you need to pickup at least the Starter Kit (£149.99) to get going. This comes with two cars, Groundshock and Skull, a four car charger, tire cleaner, riser pieces and ten track pieces capable of constructing eight different layouts. Additional track expansions and cars can be bought at a cost of £19.99-£49.99.

To take part in a race each player needs a vehicle and the free Anki Overdrive app installed on a compatible iOS or Android phone or tablet. The app and your device becomes your controller. It’s not a cheap setup but most households seem to have phones and tablets these days. Also it’s totally worth it as there are literally endless hours of fun to be had here.

First thing you should do before playing is put your vehicles on to charge. Four vehicles can be charged at the same time and it takes up to 10 minutes to fully charge them. Each charge is good for around 20 minutes of racing which is enough for a couple of races.

While the charging is going on it’s time to build your track. This is a very simple process even for young players as the track pieces have powerful magnets in them. Pieces simply snap together and it’s possible to build a simple track in seconds. It’s also very easy to change the layout, add new pieces or take others away.

With a track ready and vehicles charged, each player just needs to fire up the Anki Overdrive app. It autodetects which cars are in play and when ready the vehicles will scan the track. This part is always brilliant to watch as the vehicles zoom around your track all on their own to learn it.

Once ready to race the vehicles line up on the starting grid. When the race begins the cars automatically drive around your track. However players are in control of the speed of the cars, the lane they are in and also their weapons. It becomes a game of tactics and reflexes.

Watch the video below to see the new Supertrucks in action:

The Supertrucks are sold individually at a cost of £59.99 each. They are really an expansion to Anki Overdrive so perfect to add to an existing set. So if you bought it last year and have played it to death the Supertrucks help breathe new life into the game.

Just one Supertruck is needed to get started with the expansion and once added it unlocks the new features. Supertrucks can be used in the existing game modes but one thing they can’t do is tackle jumps on your tracks like the Supercars can. Learning to play them takes some practice and as they are much bigger they also take longer to speed up.

They have their own unique weapons with a Gravity Trap for Freewheel and a Pulse Ram for X52. They are capable of disabling opponents or blasting them off the track. As they gain speed the Supertrucks build Rage and once their meters are full they can enter a Rage Mode allowing them to speed up.

View some images of the new Anki Overdrive Supertrucks in our gallery below:

The Supertrucks also enable a new game mode called Takeover. Here players race in Supercars and try to damage the Supertruck until they take it over. They can then use the Supertruck to attack their opponents while they try and take the Supertruck for themselves. It’s a really great mode and quite different to the original ones.

While the Supertrucks are a great addition to the game their size does tend to lead to more pile-ups. As cars go flying off the track you need to stop the action a little more often. It’s not a major issue but something to be aware of.

Anki Overdrive was easily my favourite tech toy last year and the addition of Supertrucks gives players more choice and keeps the game fresh. It’s still an expensive toy but it’s great that you can buy in small packs and add to it over time. Simple to learn, addictive to play and hours of fun for all ages.