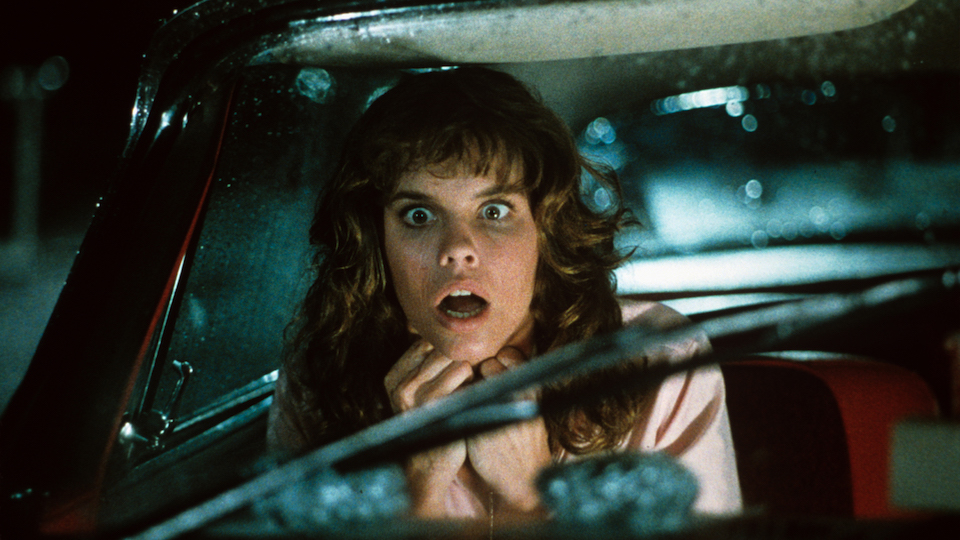 For those of us old enough to remember the joys of going to the video shop on a Friday night for our weekend movies, John Carpenter’s Christine was a staple of the VHS era. It was rented multiple times in our house, prior to becoming one of the first additions to our burgeoning home video collection. It is now available on blu-ray in the UK for the first time, in pristine high definition. With hardly any blood – the film was nowhere near as gruesome as it’s contemporaries – Christine intentionally earned its R rating by adding reams of foul language into the script. The producers were afraid that no one would go and see the film if it didn’t have an adult rating. A far cry from the modern era of four quadrant marketing.

Based on the novel by Stephen King, Christine is a blood red 1958 Plymouth Fury with a demonic will to cause mayhem and death. Before she even comes off the production line, Christine has killed one man and maimed another. Despite being a huge bestseller, this isn’t one of King’s more celebrated novels, but in the hands of director John Carpenter, he delivers a slick, darkly comic, nasty little movie, accompanied as always by a typically atmospheric and minimalist score by the maestro himself.

The film features a string of excellent performances, with a wonderful central turn from Keith Gordon, who play Arnie Cunningham, the weakling boy seduced by the devilish Christine. His transformation from specky nerd to cool stud, and eventual psychopath is the central spine of the film. Look out for the way he skillfully adopts the style of speech and mannerisms of Mr. Lebay, the cars former owner. All of this is inferred from a single line of dialogue early in the film. Gordon, screenwriter Bill Phillips, and of course the director, deserve huge kudos for such economical storytelling and character development, which of course is something of a Carpenter trademark. If this was made today, we would have had a 25 minute prologue set in the late 50s explaining everything, and having Lebay wandering around calling everyone “shitters”. Not that I think Hollywood has an exposition problem or anything…ahem.

Gordon is ably supported by John Stockwell as his popular friend Dennis, and Alexandra Paul as Leigh, the beautiful girl who makes the mistake of coming between Arnie and Christine. However it is the fringe cast who provide much of the joy in this film. Character actor Robert Prosky is wonderful as the tobacco chewing, grumpy as hell garage owner Mr. Darnell. Legendary supporting actor Harry Dean Stanton turns up as the detective investigating the strange goings on with Arnie and his car. Best of all is Roberts Blossom as George Lebay, the trussed up old fucker who sells the car to Arnie. His gnarly performance is a grimy, sweaty, cigar-stained delight of despair and barely concealed menace.

It’s something of a shame that the film runs out of gas towards the end. The finale is a little flat, especially after the thrilling second act with the iconic rebuild and revenge sequence, but it remains enjoyable, and is definitely one of the better Stephen King adaptations from the 80s. In terms of the disc itself, the film looks fantastic in the new HD transfer. The un-remastered deleted scenes attest to this. There is an entertaining audio commentary with John Carpenter and Keith Gordon, and a very interesting documentary about the making of the film, presented in three parts. It features contributions from Carpenter, Gordon, Bill Phillips, John Stockwell, and Alexandra Paul. The special features are rounded off with a selection of trailers and TV spots, an image gallery, and the option to watch the film with the isolated score – a real treat for fans of John Carpenter’s soundtracks.