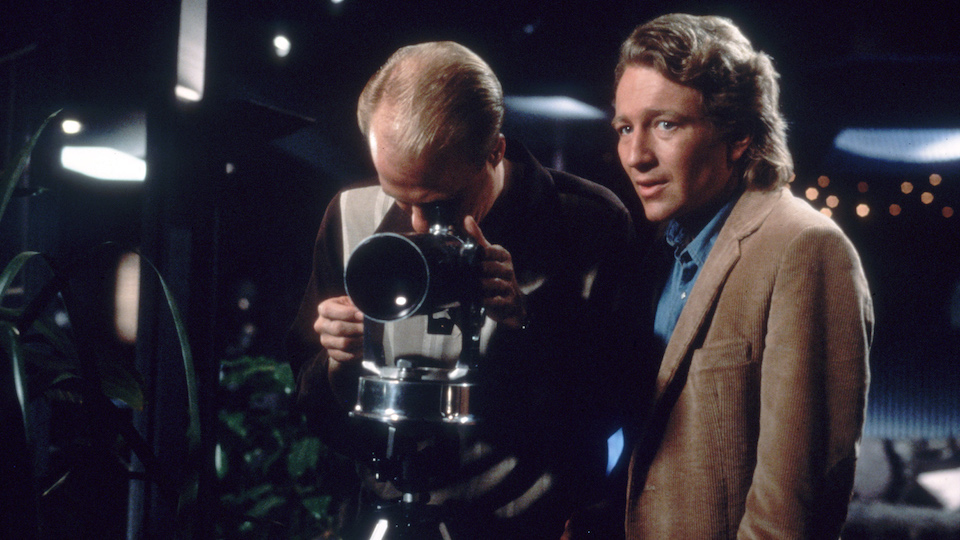 Arriving on blu-ray for the first time in the UK, courtesy of new distributor label Indicator, Brian De Palma’s gleefully trashy sex and voyeurism thriller is well worth a peep. Given free rein by Columbia Pictures to make any film he wanted following the success of Scarface, De Palma set to work on Body Double, a violent and kinky skin flick, which he had originally intended to be Hollywood’s first mainstream hardcore sex film.

The film works as the ultimate career distillation of De Palma’s thematic concerns and obsessions – the works of Alfred Hitchcock, women in peril, voyeurism, sex, and graphic violence. Intertwining the plots of Rear Window and Vertigo, but then imbuing them with all the tits, ass, and blood old Hitch could only dream about.

Body Double follows the downtrodden adventures of Jake Scully (Craig Wasson), a B-movie actor who loses a gig playing a vampire because his crippling claustrophobia ruins a scene in a coffin. He then goes home to find his girlfriend fucking someone else. A fellow actor, Sam Bouchard (Gregg Henry) is going out of town and needs someone to housesit his ostentatious bachelor pad. With his career and personal life both on hold, Jake is happy to do it. Even more so once Sam reveals the real selling point of the house – a telescope trained on the bedroom window of his stunningly beautiful neighbour Gloria Revelle (Deborah Shelton). Every night she dances erotically in her revealing lingerie. It’s his own private peep show.

In his capacity as a peeping tom, Jake witnesses Gloria being abused by her husband, and being spied upon by someone else. Fearing for her safety he begins stalking her, in order to protect her from the creepy disfigured guy who is also watching her. By taking this choice, and trying to fulfil his male fantasy, Jake ends up engulfed in a sinister plot, resulting in one of cinema’s most lurid sexual murders. As a side note, in the novel American Psycho, this was Patrick Bateman’s favourite film.

Baffling, frustrating, and getting weirder with each passing scene, De Palma’s plot – for all it’s bizarre twists and turns – surprisingly works like clockwork, with each reveal hitting it’s mark at exactly the right moment. When Jake finally realises his part in all of this, he is punished for not keeping to the script. Is this De Palma taking a playful dig at actors? If so, it is certainly not aimed at his cast in Body Double. Craig Wasson, an almost unknown, is perfect as Jake, because he is so unknown. Even had this film proven a huge success with critics and audiences (it was neither) Craig Wasson would not have gone on to be the next James Stewart, and De Palma will almost certainly have known that when casting him. The true star-making turn in this film however, is Melanie Griffith, who delivers a fearless and ferociously feminist performance as Holly Body. You can look for (and probably find) sexism and misogyny in a lot of De Palma’s movies, including this one, but you will not find it in Holly.

Technically the film is a triumph. No one moves a camera like Brian De Palma, and his understanding of the language of cinema is practically unparalleled. The cinematography is terrific, perfectly blending reality with De Palma’s stylistic flourishes of cinematic artificiality, all of which is complimented by Pino Donaggio’s new wave score.

This new release is topped off with a great selection of extras, the centrepiece of which is a series of short documentaries, featuring fascinating interviews with all the main players including De Palma and Griffith. Other highlights include a detailed interview with first assistant director Joe Napolitano, and a hilariously awkward archive interview with Craig Wasson on NBC. There is also the option to watch the film with score isolated.