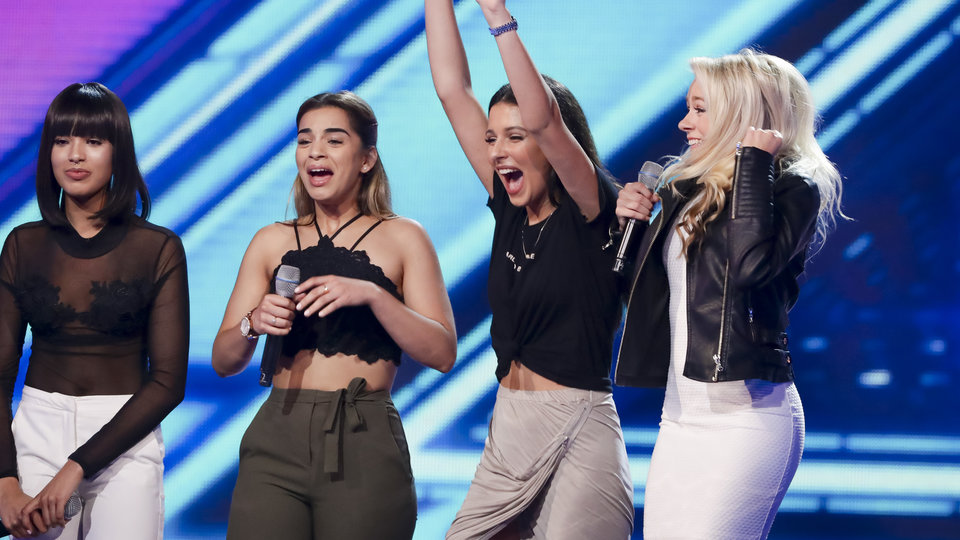 The six chairs challenge continued tonight as Sharon and Louis tried to find their final six contestants. The final six will go onto the next stage of the competition, the judges houses.

Samantha Atkinson was up first and picked ballad, Run To You as her song. Samantha’s voice is powerful but I didn’t think it was the right voice choice. This song is famously difficult but she still did a great job at it. Louis thought she needed a chair and Sharon loved it too. Singing Wild Houses was next contestant Melissa Pedro, who sang her heart out. Simon said he liked her voice and her but didn’t like the song choice. Sharon agreed but said that she know what she was capable of and deserved the second chair.

Irina Dedyuk hoped to convince Sharon that she deserved the third chair. The competition really heated up when Irina stripped to a skimpy outfit. Simon told her that she would be remembered and deserved a seat. Sharon thought she should get a chair also. Also hoping to get a seat was James Wilson, who decided to sing Trouble. He’s song choice suited him perfectly even though he struggled a little during the chorus. His performance made some of the contestants cry and rightly so. Nicole said that with that talent he couldn’t run, Simon said that he knew he would be good. Simon got the fourth chair.

After the break it was Honey G’s turn to try and convince Sharon to give her a spot at judges houses. Honey G didn’t disappoint as always she brought a smile on my face. She looked bonkers as ever and brought something a bit different to the competition. Simon thought that if this was an act she was a genius. Sharon didn’t know if it was enough for a place at judges houses. Sharon couldn’t give her a chair and so it was the end of the road for Honey G. Sada Vidoo was the perfect follow-up to Honey G. The equally bizarre candidate dazzled the crowed with her eccentric performance and Simon said he liked how crazy she is. Sharon gave her the fifth chair.

Relley C tried to win over Sharon with ballad, Wonderful World also but her performance was disappointing to me. Her vocals were a little shaky and didn’t sound great. Louis remembered Relley from past auditions and that she deserved a chair. Simon said that she got better and that he loved her personality. Sharon gave her the sixth chair. James Craise looked good on stage and seemed confident. His vocals were good but I didn’t think that he was the best singer on the show but his heartfelt performance was emotional. Nicole said that he ended really strongly, Sharon thought the ending was really high too and had to decided whether he’s performance was worth a chair. James got a chair, which meant it was the end of the road for Melissa Pedro.

Janet Grogan sang Ariana Grande’s One Last Time beautifully. I thought the stripped down version was great but the judges disagreed and thought it was a poor song choice. Sharon decided nevertheless to give her a chair. Irina Dedyuk had to concede her seat.

Rebekah Ryan tried to impress the judges with a rendition Annie Lennox’s beautiful ballad, Why. I thought Rebekah did a great job and sang beautifully. Her emotional performance was a win for me. Louis thought it felt desperate, Nicole thought it wasn’t her best performance to date. Sharon struggled to decide whether she should get a chair. Sharon didn’t think she’d done enough to deserve a chair. Sara Aalto tired to secure her place in the competition by singing a big ballad. Simon said he really liked her performance but Sharon didn’t agree with him. She thought she didn’t deserve a chair and Nicole thought she was one of the best singers in that category. Sharon just couldn’t connect with her but asked her to sing another song to try and convince her otherwise. Unfortunately her second song was worse than the first and very pitchy, which meant she couldn’t get a chair.

Next up was Christopher Peyton, who sang his heart out on stage. It’s hard to deny Christopher’s vocals who are simply stunning. I loved his performance and thought he deserved a seat. Sharon agreed with me and decided to give him Sada Vidoo’s chair. Marianna Zappi sang Over the Rainbow and her vocals shone througout the song. Louis thought it was the perfect performance and Sharon loved it too, which meant James Craise had to go.

Ivy Grace Paredes wanted to show off her vocal by singing Whitney Houston’s I have Nothing and it paid off. Her singing was off the charts and she didn’t even flinch as she hit all the big notes. If anything I thought she sounded to much like Whitney Houston. Nicole thought that her voice needed to be heard, whilst Simon didn’t think it was the best audition but thought that she should get a seat. Sharon agreed and gave her Marianna Zappi’s. The last contestant up on stage was Anelisa Lamola who decided to give it her all with a stripped down version of Amazing Grace. Her acappela performance was always going to be risky but I like it when contestants try and be different. Simon thought she went off-peak and didn’t think it was good enough. Sharon struggled to make a decision but had to let her go.

Duo Tom & Laura tried to win over the audience with an acoustic version of Young Hurts. I loved their performance and thought the vocals were great. Nicole said they had grown during the competition and Simon thought they were like bread and butter. Louis decided give them a seat and it meant it was the end of the road for Kayleigh and Stefan. Hoping also get a seat were Girl Next Door, who gave a great live performance complete with dance moves. I thought the performance was strong but Nicole thought only one of them impressed. Sharon thought they raised the bar and Simon thought it would be crazy to kick them out. Unfortunately it wasn’t enough for Louis and he sent them home.

Next up was boy band Next Lad, who sang Let it Be. The band looked good on stage and did a good job but with Louis taking decisions it could go either way. Simon thought the harmonies were bang on but Louis wasn’t sure. Louis decided to give them a Ottavio and Bradley’s chair. No Gateway sang One Last Time but to me their harmonies were flat and really pitchy, I wasn’t impressed by the boys performance. Sharon thought it wasn’t exciting but Louis thought they should get a seat. Everyday Solution had to concede their seat for the band.

The X Factor wouldn’t be the show it is without a twist and so Louis brought back Ottavio and Bradley and gave them their seat back. He also brought back to the stage Girl Next Door, which meant someone had to give up their chair. It was the end of the road for No Gateway. Skarl3t were the last act up on stage but by no means the worse, in fact the girls were brilliant and really smashed it on stage. The contestants had to watch as the girl group gave one of the best performances of the evening. Louis had to decide, whether they were good enough for a place and let the three girl groups battle for it.

And the groups are:

The next stage of the competition will be the judges houses.

The X Factor 2016 will continue next Saturday at 8pm on ITV.