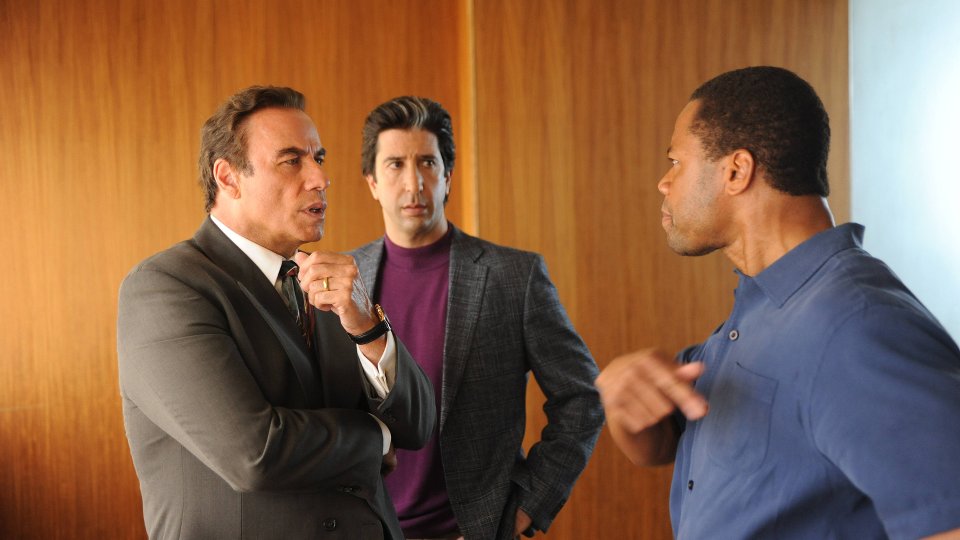 Following the huge successes of Glee and American Horror Story, it was surprising when Ryan Murphy announced his next project was going to be a straightforward drama focusing on a real life murder case. The initial announcement about The People V O.J. Simpson: American Crime Story was met with a fairly muted response and I have to admit I was left wondering the point of dramatising a murder case that had already had intense media attention. As with all Murphy’s shows, a bloated cast of big names was announced and the feeling of dread began to set in deeper.

The 10-episode season has just been released on DVD and I’m ready to eat humble pie. Despite venturing into the show expecting it to be not very good, I was very pleasantly surprised when I heard myself proclaim to a friend that it’s one of the best shows I’ve seen all year. It truly is every bit as good as you’ve heard and them some, and for my money it deserves every single one of its massive slew of award nominations.

The People V O.J. Simpson: American Crime Story recounts the events of the murder of Nicole Brown Simpson and her friend Ron Goldman with famous American football star turned actor O.J. Simpson (played here by Cuba Gooding Jr.) investigated as the only suspect. The series picks up on the night of the murders as Nicole and Ron’s bodies are found. O.J. headed out of town the same night but returned when the police contacted him. Despite the evidence stacked against him, O.J. pleaded his innocence, which he promptly undermined by going on the run with a friend leading to a high profile car chase down the freeway.

The series spends much of its time looking at the contrasting tactics of the prosecution and the defence teams led by Bob Shapiro (John Travolta) and Marcia Clark (Sarah Paulson) respectively. The prosecution attempt to confuse the case by claiming that O.J. is a victim of police racism, while the defence use the mountains of evidence against him to try their case. On the off chance you don’t know the outcome of the case, I’m not going to say anything further, but the series definitely asks lots of pertinent and poignant questions about the state of society and the justice system.

For once in a Murphy show, the star heavy cast isn’t a distraction. Actually this is an example of a time when a show needs heavy weights to give it the gravitas it strives for. Cuba Gooding Jr turns in his best performance possibly ever as O.J. portraying him as wildly emotional and aggressive with a child-like naivety. He gives us a star that has used his status to get away with his poor behaviour, and Gooding Jr. really brings his conflicts to the surface for a riveting performance. Equally fantastic is Sarah Paulson, who is always the best thing about American Horror Story, as tenacious District Attorney Marcia Clark. She soon realises that her initial confidence that O.J. will be found guilty may be misplaced and she scrambles to do everything she can to put him behind bars.

Other notable performances include John Travolta as the eccentric and dare I say fame-hungry Bob Shapiro, David Schwimmer as O.J.’s close friend and attorney Robert Kardashian, and Courtney B. Vance as powerful black rights activist and attorney Johnnie Cochran. Mention should also go to Connie Britton who plays against type as Nicole’s friend Faye Resnick who capitalises on her 5 minutes of fame by writing a tell-all book.

Special features on the release include an interactive timeline of the case and a featurette entitled Past Imperfect: The Trial of the Century.

The People V O.J. Simpson: American Crime Story is a fascinating and addictive watch that you’ll binge-watch in no time. For me one episode turned into three turned into a full season and I couldn’t get enough of it. While I’m sure the series embellishes on what really happened, it’s a fast-paced and gripping drama that still manages to surprise, even if you think you know the case inside out. With strong performances across the board, The People V O.J. Simpson: American Crime Story is an absolute must-see. I just hope that the Hurricane Katrina second season bucks Murphy’s well-known trend of getting bogged down (and failing to get of) the sophomore slump.