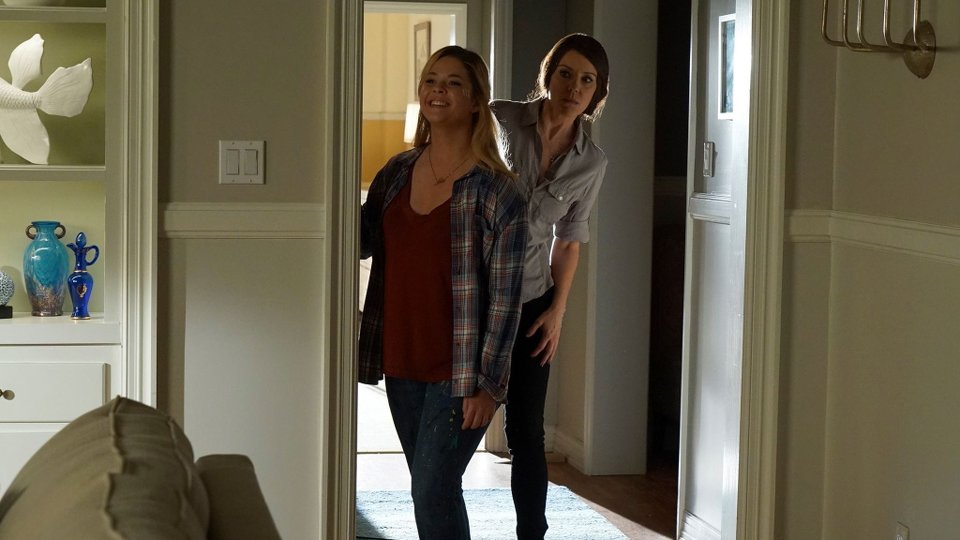 Jason’s (Drew Van Acker) return to Rosewood brought with it an unexpected lead to a surprise discovery on this week’s episode of Pretty Little Liars.

If you haven’t seen the latest episode of Pretty Little Liars and want to avoid spoilers then stop reading now. If you have seen it and want to relive the action then keep reading.

Death is in the air

Aria (Lucy Hale), Spencer (Troian Bellisario), Ali (Sasha Pieterse), Emily (Shay Mitchell) and Hanna (Ashley Benson) were enjoying a nice quiet drink at The Radley when the news of Sara Harvey’s (Dre Davis) untimely death started to spread. The police arrived at the hotel and removed the body with the Liars watching on as Jenna (Tammin Sursok) cried her eyes out for the death of her ‘friend’.

O brother where art thou?

Jason arrived at the DiLaurentis home and immediately made his feelings about Mary (Andrea Parker) known. Worried that Ali had been taken in by Mary’s deceptions, Jason appealed to Aria for help. An awkward dinner followed with Ali furious that Aria was siding with Jason. Mary served a dish that turned out to the very thing Jessica made on her children’s birthdays. Jason pushed Mary for some answers and she revealed that she had seen Jason years earlier when he turned up at his Aunt Carol’s house and was turned away by Jessica. She told them that Jessica refused to tell her what happened to Charles and locked herself in a storm basement until Mary left.

With Sara’s death now public knowledge, Hanna used her mum’s master key card to get into Jenna’s room in search of her laptop. She was interrupted by Caleb who had been beefing up security at The Radley and he agreed to help her get the key to a locked box Hanna found under the bed. Caleb posed as a masseuse so he could take the key from Jenna’s bag and he gave it to Hanna and Spencer. They opened the box and found files in but were interrupted by Noel Kahn (Brant Daugherty) who was making a furious call to someone. It transpired that it was Noel that broke into Toby’s (Keegan Allen) home, attacked Yvonne and stole the file that Emily had given to him.

While Noel continued to hang around like a bad spell, Toby told Spencer that he saw Jenna a few years earlier during a family vacation and she tried to make a pass at him again. He rebuffed her and hadn’t seen her again until she returned to Rosewood.

Hanna, Emily, Spencer and Ali went to investigate the storm basement that Mary had mentioned during her awkward family meal. Inside they found files about themselves but Aria’s was missing. The basement was filled full of photos of the girls and after finding Mary’s Radley file they discovered she actually had two children, not just one. Who is her other child? Spencer’s car alarm started to go off so the girls left the basement and returned to the car, shutting the doors to switch the alarm off. The car then locked trapping them inside as a mysterious countdown appeared on the sat nav screen. Worried the car was going to blow up the girls tried to break up but at the end of the countdown A.D. warned them if they discovered his/her identity before he/she found Charlotte’s killer, they would die. Then the basement exploded destroying all the evidence. As the girls watched the fire rage, they Hanna saw someone writing ‘I see you’ on the back windscreen.

At the end of the episode A.D. was seen throwing Noel’s file in a bin and burning it. He/she also put Aria’s to one side. What is A.D. planning?

Wedding planning quickly overwhelmed Ezra (Ian Harding) and he suggested that Aria elope with him to Tuscany. Taking time to think about it Aria was sad that her friends wouldn’t be by her side but ultimately decided to go with it. As the two packed their belongings ready to leave, there was a knock on Ezra’s door that brought the news that Nicole (Rebecca Breeds) could still be alive. Uh oh! What does this mean for Ezria?

The sound of two hearts breaking

Following Yvonne’s attack, Spencer advised Toby to leave town to make sure that he and Yvonne were safe. He took her advice but not before telling her that the house that he was building for Yvonne was actually meant for her. It looks like it’s well and truly over for Spoby with Toby revealing that he and Yvonne will start a family in Maine.

Emily spent time bonding with her mother Pam (Nia Peeples) this week who was celebrating her birthday and feeling guilty about having fun without her late husband. Emily treated her to a meal at The Radley where their evening was interrupted by a noisy hen-do that Pam eventually joined and let her hair down for once.

Pretty Little Liars continues at 8/7c on Freeform in the US Tuesday and Netflix in the UK Wednesday. Preview the next episode, Exes and OMGs, below: