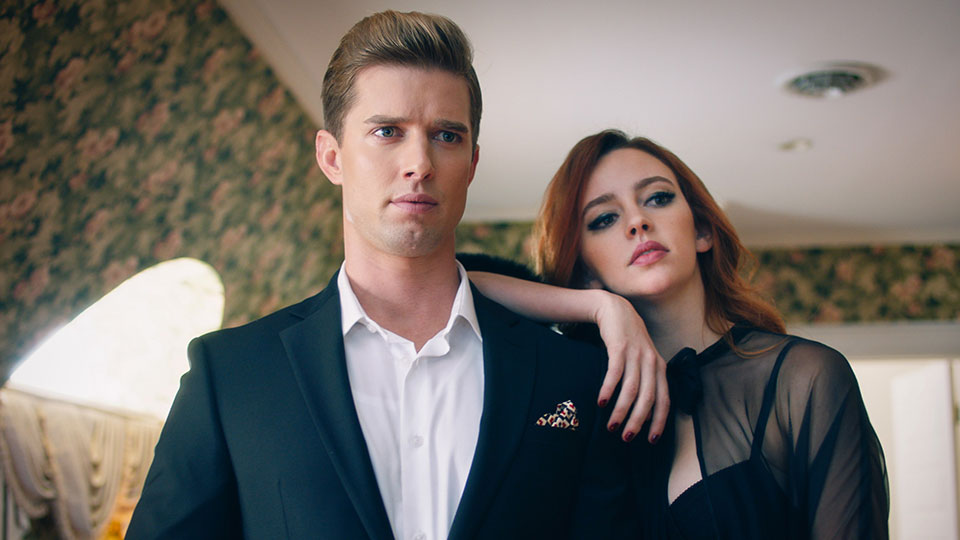 Top spy Corey Gage (Drew Van Acker) decides to retire when he meets Pam Grayson (Poppy Delevingne), the woman of his dreams. A whirlwind romance and wedding follows and a year down the line, Corey finds himself bored but adamant he wants to continue living a normal life. His spy friends, led by Smuts (Blake Anderson), stage an intervention and rope Corey into one last mission, which threatens to out his secret profession to Pam.

Spy Intervention is the feature directorial debut from Andrew Mylrea. It’s a parody of spy films such as James Bond and it keeps its tongue firmly in its cheek throughout. Made on a tight budget, Spy Intervention leans into its silliness rather than trying to play it straight and that works to its advantage. The premise is simple and you know as soon as Corey throws in the towel that it won’t be long until he’s back to his old spying ways.

Part of the fun of the film is waiting for Pam to discover what her husband actually does for a living. You know it’s going to happen but it unfolds in an entertaining way. Corey is partnered with fiery Alexandria (Natasha Bassett) for his mission, and she proves to be a bit of a handful for him. As Corey continues his mission with Alexandria, Pam gets suspicious that her husband is having an affair and what plays out is thoroughly entertaining.

Spy films have been done to death over the years, both as straight-up spy thrillers and comedies, and Spy Intervention doesn’t really bring anything new to the table. It’s a little bit Chuck with more than a few nods to Bond, and it’s really just 93 minutes of switch-your-brain-off fun. Drew Van Acker, best-known for Pretty Little Liars and Devious Maids, is perfect as the lead. He’s handsome, charismatic and adept at comedy, and he’s a solid leading man. Paired with Poppy Delevinge, who is equally solid as Pam, Van Acker gets the chance to prove that he can carry a film.

The scene stealer though is Natasha Bassett as Corey’s unpredictable partner Alexandria. She’s a joy to watch on screen and her performance is feisty. Like Van Acker, Bassett is adept at comedy and she really shines in this film.

If you go into Spy Intervention knowing what you’re letting yourself in for, you’ll enjoy the ride. It’s silly and the special effects aren’t great but the cast is very watchable. There are laughs to be had and some great plot twists, and if you accept you’re watching a popcorn flick, you’ll enjoy yourself. If you want to see a sharp parody of the spy genre, this film likely isn’t going to be your cup of tea.