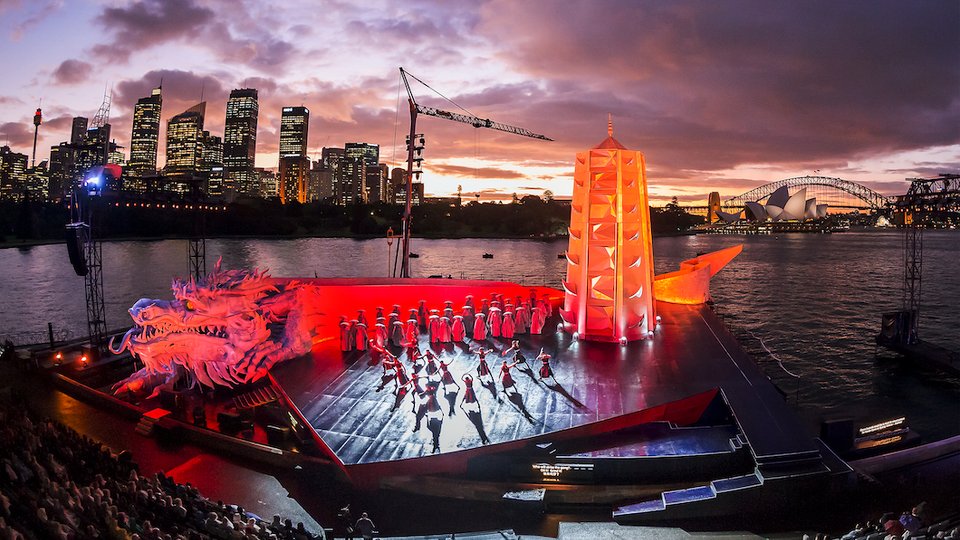 Turandot; The Puccini classic, the final opera from one of the greats – CinemaLive are pleased to announce that over 300 cinemas in the UK will screen Opera Australia’s magnificent production of Turandot – Handa Opera on Sydney Harbour on Thursday 15th September for one night only; Giving UK cinema audiences a unique chance to see this spectacular production of one of the world’s most famous operas from the other side of the world.

Created especially for the acclaimed Handa Opera on Sydney Harbour’s jaw-dropping outdoor water-stage performance, director Chen Shi-Zheng brings a unique perspective to the classic story about Turandot, the beautiful and powerful princess, who challenges her many suitors to answer three riddles on pain of death.

Puccini’s Turandot is one of the greatest operas ever written: Brilliant melodies for music-lovers, a gripping story for those that need action and drama, an exotic setting and plenty of movement for lovers of stagecraft and visual splendor. Not forgetting an incredible version of Nessun Dorma performed by Italian tenor, Riccardo Massi.

“Handa Opera on Sydney Harbour has now completed its fifth production, and it continues to go from strength to strength. Turandot is the biggest production we’ve ever done and it was an absolute thrill to experience.” said Lyndon Terracini, Artistic Director of Opera Australia.

As one of the four most important outdoor opera events in the world, audiences will delight in seeing the power and drama of Turandot on the big screen. Riccardo Massi’s rendition of Nessun Dorma does not disappoint.”

With a cast of seventy-eight, designer Dan Potra has created magnificent costumes as well as a stunning set for the spectacular harbour backdrop, including a 60-meter fire-breathing dragon, with a tail that morphs into the Great Wall, and a shimmering pagoda that stands 18 meters tall.

Steering away from traditional Chinese tropes, the director presents a China that is sleek and modern, with set elements and costumes that reflect the spirit of today. The production also features 187 hats and headdresses, 46 wigs and 30 sets of facial hair!

Expect bold, dramatic, bright shapes and a set that will take your breath away.

Performed in Italian with English translations

For all participating cinemas and to book tickets visit www.turandotonsydneyharbour.com

To celebrate the screenings we have 3 pairs of tickets to give away. All you need to do to be in with a chance of winning is answer the simple question below and tell us which cinema you would like to go to (you can see all participating cinemas by going to www.turandotonsydneyharbour.com)