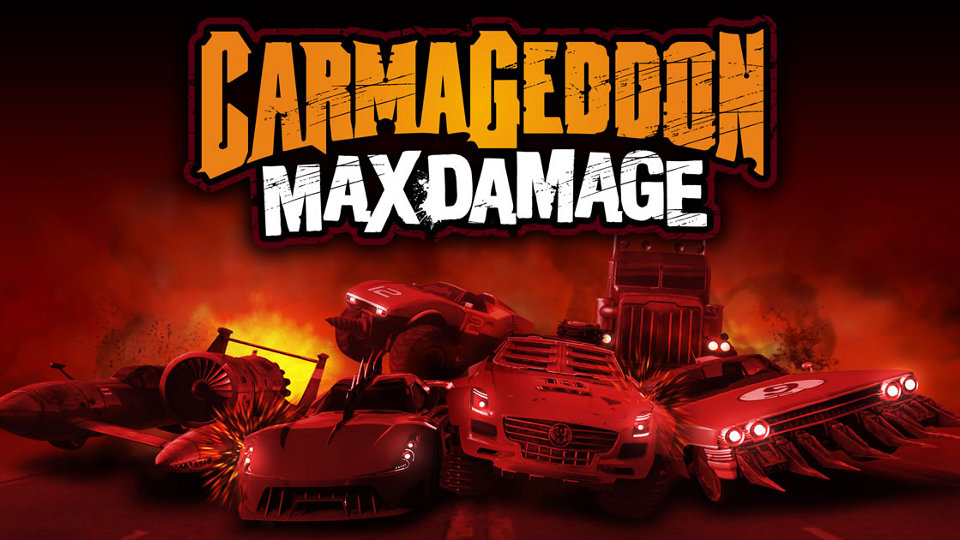 I was 18 years old when the first Carmageddon game was released back in 1997. I first came across it via a demo disc on the cover of PC Zone and was addicted. The game was incredibly fun thanks to its crude humour and violent yet hilarious gameplay.

The original demo featured human pedestrians and lots of blood and gore but was censored upon release. Here in the UK we got zombies with green blood while over in Germany they had robots with the blood replaced with oil. The first release of the game didn’t feel as fun with the censorship changes but it didn’t take long for an unofficial blood patch to be released. Eventually the BBFC changed their minds and the game was released in its true form.

Since then there have been a couple of sequels and the series made a return last year on PC thanks to a successful Kickstarter campaign. The last game was Carmageddon: Reincarnation and that has now found it’s way to PS4 and Xbox One in the form of Carmageddon: Max Damage.

If you’ve played previous entries in the series you’ll find things a bit too familiar when you load the game up. The two main drivers, Max Damage and Die Anna, are back complete with their original red and yellow cars. The tutorial level at the start of the lengthy campaign mode is also a remake of the first level from the original.

The classic races give you the freedom to tackle them how you wish. You can win a race by completing the set number of laps before the rest of the grid. Alternatively you can destroy your opponents by crashing into them repeatedly. The final option is to track down every single pedestrian on the level and run them over.

The maps are large and it can take a long time to finish a race. It’s also very easy to get distracted as the maps allow you to freely roam where you like. While racing you’re surrounded by all manner of ramps and jumps that are just too tempting to drive past.

Pedestrians provide the biggest distraction of all and it’s near impossible to not murder a few during a race. You’re actually rewarded for doing so with cash and bonus time. Tracking down every single one on a level is rather tough and very time consuming due to the large numbers of them and huge maps. The game doesn’t feel as gory as it did 20 years ago and certainly isn’t as shocking. This is despite being able to mow down everyone from bikini-clad obese women to pensioners on mobility scooters and even wheelchair users.

The campaign is gated off and you need to earn certain amounts of coins and medals to open up each section. This means you can find yourself having to replay events multiple times in order to progress. To try and keep things interesting there are a variety of different modes in addition to the classic races. These include races where only your finishing position matters and arenas where you need to find a set number of randomly spawning checkpoints before your rivals.

Across the modes your AI rivals split their time between having a go at racing and trying to crash into you. If you want to play the game as a racer you’re not going to find much of a challenge against the AI. They get quite frustrating when you’re in a busy area and they just keep bumping you about. Getting your own back on them and smashing them to pieces is rather satisfying.

While racing around every bump, scrape and crash causes damage to your vehicle. The damage affects the handling (making it even worse) and it’s possible for large chunks to come off or even to rip it into two. An onscreen HUD tracks your damage showing you what is broken. A press of the Y button starts to repair the car as you race. If you wish you can keep the button pressed so your car is full repaired as damage happens. Each repair costs coins and slows your progress to unlocking the next level. A neat touch is seeing damage parts fly back to your vehicle as you request a repair.

Carmageddon litters the maps with loads of powerup barrels. These provide all kinds of crazy abilities including invincibility, jelly suspension, springs that catapult rivals away and an anvil launcher. A new favourite is one that rips the heads of pedestrians as you drive by. The powerups are quite fun but you can also ignore them if you wish.

If you’re into making gameplay videos then there is a lot to like about the built in Action Replay system. At any time during play you can jump to the Action replay and relive the action and put together a video using a variety of camera angles.

Check out some screenshots of the game in our gallery below:

The game is quite fun in short bursts but as many levels have you playing for up to 30 minutes it can get quite boring. The worst problem with the game is that the car handling is absolutely abysmal. I’ve nothing against challenging controls but what’s on offer here seems to go completely against the type of game it is. You’re constantly fighting against the cars and some are a challenge to even drive straight. The poor handling just ruins the game and turns it into a very frustrating experience.

When you’re done with the campaign it’s possible to take the game online for some multiplayer fun. It really is quite fun as well with a variety of modes. My favourite was the Fox ‘N’ Hounds event where one player is highlighted blue and has to survive without being touched for a certain time. The other players need to crash into them to become the Fox and then it’s their turn to survive. The player who reduces their clock to zero first wins.

Carmageddon: Max Damage feels like a missed opportunity which is a real shame. If the developers can fix up the driving handling then it would be a game that I’d want to go back to a lot more often. In its current state it’s just too frustrating and that makes it really hard to recommend.

Advertisement. Scroll to continue reading.
In this article:Carmaggeddon, PS4, Racing, Sold Out, Stainless Games, Xbox One