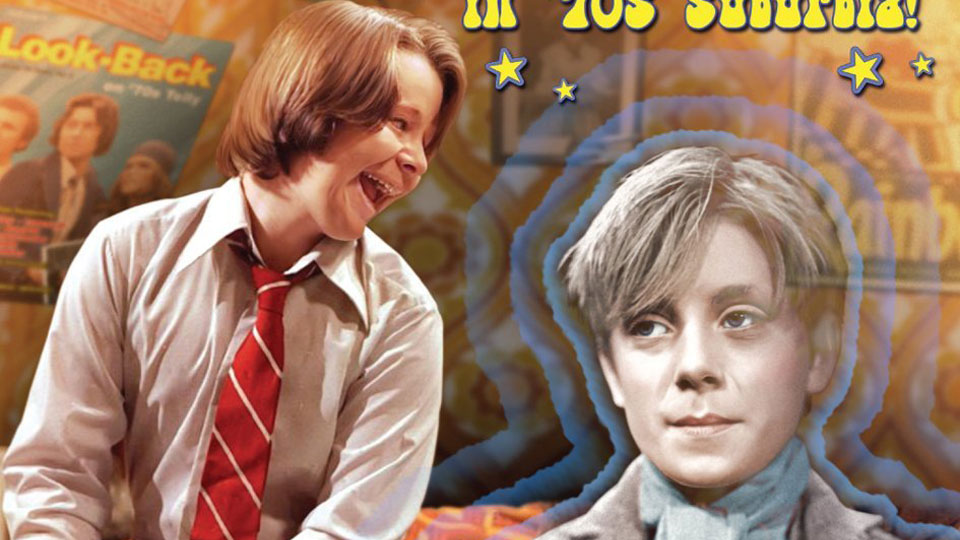 Nobody’s House follow the adventures of two children and their parents as they move into a haunted house, annoying the ghost who already lives there. The series was made in 1976, and is available now on DVD for a new generation to enjoy.

The opening episode sees the Sinclairs moving into their new home, which will also be an antiques shop. The estate agent is rather jittery, knowing the reputation of the house as being haunted by a poltergeist. Nevertheless, the Sinclairs move in, but it isn’t long before things start going bump in the night and moving of their own accord. Whilst the adults can’t see the ghost, the teenagers can, and when the ghost wakes them up to warn them about a fire in the basement, they realise he’s not so bad after all…

As the series develops, the children develop a friendship with the ghost, whom they call Nobody. He was an adolescent who died in the Victorian era when there was a workhouse on the site. This gives the series the opportunity to contrast the lives of young people in the 1970s with their far less fortunate contemporaries a century earlier.

Nobody’s House is well-developed and written (by Martin Hall and former Doctor Who producer Derrick Sherwin). The concept for Nobody is that he’s an Artful Dodger-type – cheeky but loveable.

As with much good children’s television of the time, Nobody’s House boasts some great actors in the cast. William Gaunt (The Champions) and Wendy Gifford (Love For Lydia) play the parents, whilst there are guest performances from Brian Blessed as an unscrupulous ghost (the same year he made I, Claudius) and Brian Wilde (Porridge) as a ghost hunter.

The series manages to be charming and funny as well as thoughtful. A lot of consideration has gone into how sad Nobody’s situation is, with his Peter Pan syndrome in that inevitably the living children will grow up, leaving him behind, forever the same age. It’s also considered that Nobody missed out on a lot in his short life, knowing nothing of parties and presents, and there are plenty of moments that pull on the heartstrings. Kevin Moreton, a popular child actor of the time, is perfectly cast as Nobody, and he merges sincerity with mischievousness.

All seven episodes retain a very high standard. With a limited premise, it’s not a show that could have run and run forever, but this one series is an absolute gem. Nobody’s House is fondly-remembered by children of the 1970s, and it’s one of the few times where the memory won’t cheat, and nostalgia doesn’t cloud judgement: it really is a cracker.

The bookend telling viewers that a novel based on the series is available from all leading retailers, priced 40p, is a lovely addition.