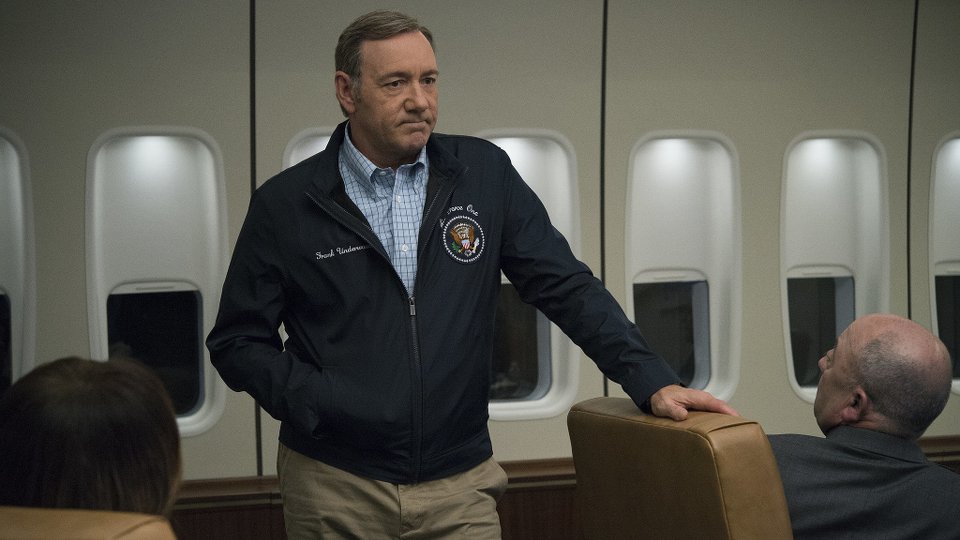 Frank Underwood (Kevin Spacey) faces his biggest threat yet in the fourth season of Netflix original series House of Cards. Recently released on DVD and Blu-ray, House of Cards: The Complete Fourth Season finds Frank battling with his wife Claire (Robin Wright) who decided to leave him at the end of the third season. Desperate to build her own political career, Claire heads home to Dallas to run for Congress but comes up against a challenge of her own when the incumbent endorses her daughter instead. With Claire out of the picture, and sabotaging his campaign, Frank starts to lose public support and it doesn’t take the Underwoods long to realise that they are much stronger together.

House of Cards divided fans during its third season with some arguing that the season wasn’t as strong as it had been during its first two outings. Personally I thought season three was the strongest yet as Frank and Claire became divided due to the mismatch of their individual political aspirations. Season 3 needed to happen in order to get to season 4, which for the most part pits Frank and Claire against one another and for the first time really establishes what a formidable foe Claire can be.

Alongside the Underwoods’ private battle against one another, the Governor of New York and Republican presidential nominee Will Conway (Joel Kinnaman) starts winning over the public and gaining serious support for his campaign, casting doubt as to whether Frank will be able to hold on to his position. With pressure from his own party to step down, and the threat of Will winning the presidential election Frank has quite the uphill battle on his hands this season.

For me, House of Cards has gone from strength-to-strength with each season. Frank and Claire going to war with one another was always going to be on the cards and it doesn’t disappoint. During the fourth season we get to learn a lot more about Claire and her past with the introduction of her mother Elizabeth (Ellen Burstyn). Claire is accompanied home by her new political consultant LeAnn Harvey (Neve Campbell) and writer Thomas Yates (Paul Sparks).

Robin Wright is the shining star of the season. Wright has always given a magnificent performance but for the first time she’s given the opportunity to show a lot of different sides to Claire. Her scenes with Kevin Spacey are the best in the show and the two actors have created a chemistry that makes you believe they really do know everything about each other. Wright can move from cold and heartless to warm and loving in the same scene, and she delivers a complex and compelling performance. Spacey as always is fantastic too as is new cast addition Neve Campbell, who shows that she is more than capable to turning her hand to drama.

House of Cards builds up to a shocking climax and positions the show for an explosive fifth season, due in 2017. It is easily one of the best shows out there right now and I can’t wait to see where it goes next. The Complete Fourth Season is addictive viewing so make sure you’ve got a couple of days to put aside so you can enjoy a good old binge!

In this article:House of Cards, Kevin Spacey, Robin Wright