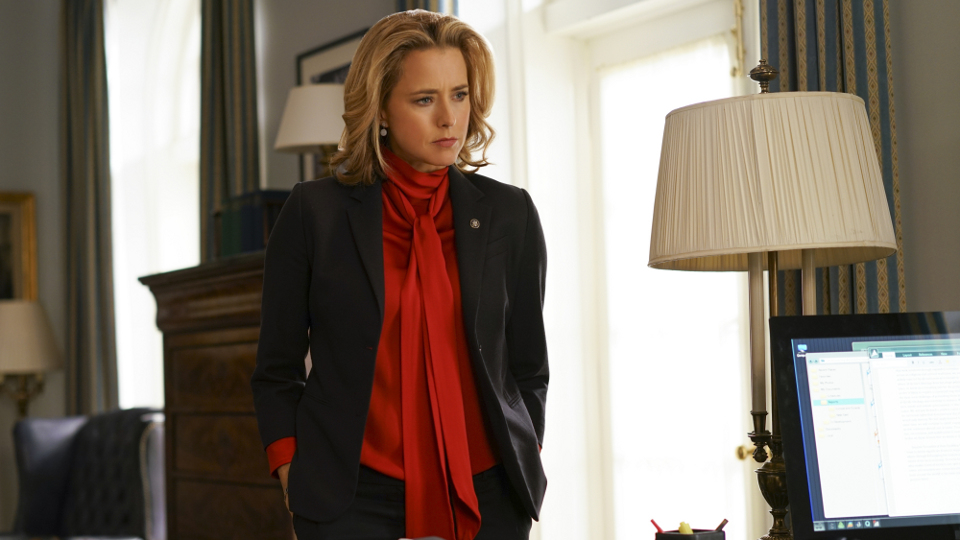 In the season two finale of Madam Secretary answered a few questions and set events in motion for season three.

The penultimate episode appeared to put an end to the Jibral Disah story arc and saw Murphy Station rescued and on their way home. It also saw Elizabeth (Téa Leoni) given the information that Dmitri might be alive and that was sure to feature heavily in the season finale.

Instead of rushing to tell Henry (Tim Daly) about Dmitri, Elizabeth spent some time investigating the claims by Russia. She called in a favour and the information she received appeared to show that Dmitri really was dead. The file she received even featured a graphic photograph showing Dmitri with a bullet wound to the head.

Elizabeth went back to the Russians with the information but the still assured her that he was alive. She decided it was a chance worth taking so called on Mike B. to find out the chances of doing a swap for Peter Buckley. He didn’t think there was any chance that Dalton would go for it. He also brought the news that he heard Dalton was looking for a new Secretary of State.

Elizabeth confronted Russell Jackson with the news and he told her to speak to Dalton directly. He also warned her off the Peter Buckley trade but she refused.

Speaking with Dalton, Elizabeth lost it slightly and ended up ranting at him. He wasn’t able to get a word in so let her finish. At the end he explained that he was indeed looking for a replacement for her. This was because he wanted her as his Vice President!

They also spoke about the Buckley/Dmitri trade and Dalton was initially against it. However Elizabeth made a strong case for doing the right thing and Dalton came around.

Later Elizabeth told Henry about Dmitri and he insisted on being there to identify him. The trade was to happen on the Finnish border with Russia in the town of Vartius. Elizabeth also mentioned the Vice Presidency job to Henry. Will she go for it?

In Vartius, Henry stepped out of his car and the Russians presented a man to them. A disappointed Henry confirmed that it wasn’t Dmitri. It appears the Russians might have been trying to trick the US and swap someone else. However as they didn’t make the trade the man got back in the Russian car and another man stepped out. It was Dmitri and the trade went as planned.

As Dmitri approached Henry he spat on the ground in front of him which obviously hurt Henry. He then walked straight past him before stopping, turning back and embracing him. Dmitri has obviously been through hell and it will be interesting to see what happens with him next, presuming he’s back next season.

With so much going on in the episode, Elizabeth had to cancel a speech to Massachusetts college. She sent Matt in her place who had written her speech and he gave a fantastic speech himself. It was explaining about how great things are done by people that no one has heard of and was a really fantastic speech.

Elsewhere in the episode, Jareth approached Henry to tell him he was going to propose to Stevie and wanted his blessing. A surprised Henry agreed but later he and Elizabeth felt it was far too soon. Stevie and Jareth came to see them to tell them of the engagement and revealed that they were going to get married that weekend. Her plan was to drop out of college and move back to Oxford with Jareth.

Elizabeth later told Henry that he’d have to talk to Stevie. He tried to practice a speech to give Stevie but instead just went and sat with her. He didn’t really need to say anything as Stevie was expecting it and surprised him by agreeing it was all too fast. She’d felt pressured into saying no because she really loves Jareth.

She later told Jareth and although he was disappointed he understood. He just didn’t want to risk losing Stevie when he went back to Oxford. Instead they agreed to make a plan to ensure things worked out right. She’s definitely grown up a lot over the two seasons.

Madam Secretary will return for a third season in late 2016 in the US on CBS and early 2017 in the UK on Sky Living.