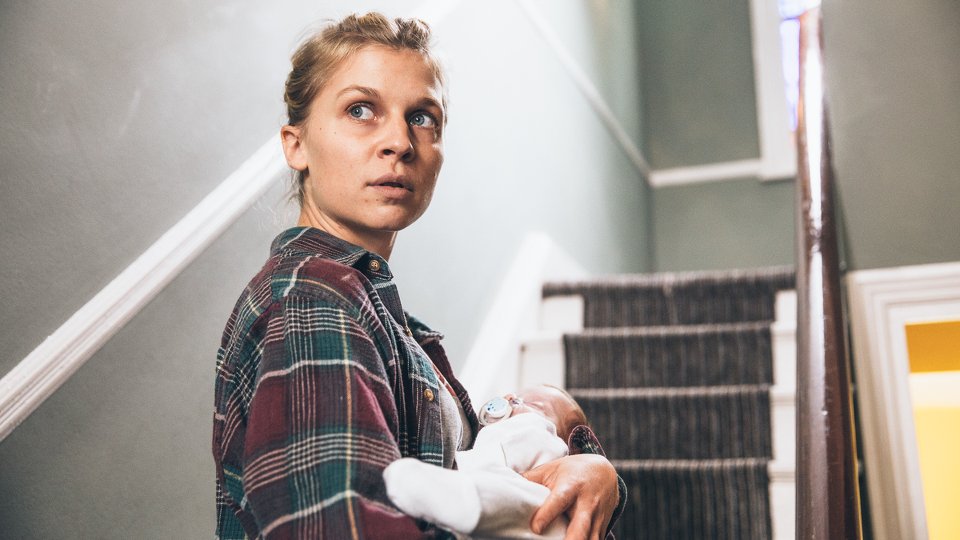 David Farr’s creepily stylish debut is a pitch dark and utterly preposterous thriller about parenthood and scary neighbours. Middle-class media types Kate (Clémence Poésy) and Justin (Stephen Campbell Moore) are expecting their first child. They have been together for many years, and were never sure about whether or not they wanted to be parents until now.

Then a couple moves into the beautiful garden villa downstairs. Jon (David Morrissey) and Theresa (Laura Birn) are also expecting, and we soon learn they have been trying to conceive for the past 7 years. The introduction to these characters couldn’t have been more signposted had they been wearing t-shirts proclaiming “weird & creepy…don’t trust us.” You’d think they would at least seem normal to begin with.

Platinum blonde Theresa is a beautiful and vivacious image of impending motherhood. This is everything her life has been leading to, and her enthusiasm couldn’t be more contrasted with Kate’s apprehension. She has no personality. She exists only to breed. Jon “chose” her specifically for this purpose.

When Jon arrives on the scene, Morrissey play him like some immediately threatening alpha – brusque, shouty, and to the point. Oh, and he’s obsessed with procreation, like something from the animal kingdom. During an excruciating dinner party between the two couples, Kate and Justin mention that they hadn’t initially wanted kids. Jon and Theresa act as if they’ve just been told their soufflé contains free range foetus.

The night ends with a terrible accident, that changes all their lives, and catapults the film into the same psychological thriller territory of The Hand that Rocks the Cradle – just darker and more perverse. The director mounts everything that follows with some interesting stylistic choices. As Kate and Justin struggle with parenthood, becoming increasingly frazzled and driven to breaking point, Farr’s camera captures all this in saturated tones, drained of colour and life, like the faces of his protagonists.

On the flip side, Jon and Theresa are filmed in a soft glow of 50s Americana. They look like characters from the opening credits of Blue Velvet. Domestic bliss, sunshine and beauty. But oooh, what’s lurking underneath. Sigh.

However, impressive aesthetics aside, this film is completely undone by predictability, it’s constant sign-posting of the bleeding obvious, and the fact that no one behaves like a normal human being. Thank goodness I was watching this on my own, as I shouted at the screen for one of the characters to do what a normal person would do. They didn’t.

In this article:Clémence Poésy, David Morrissey, Laura Birn, The Ones Below