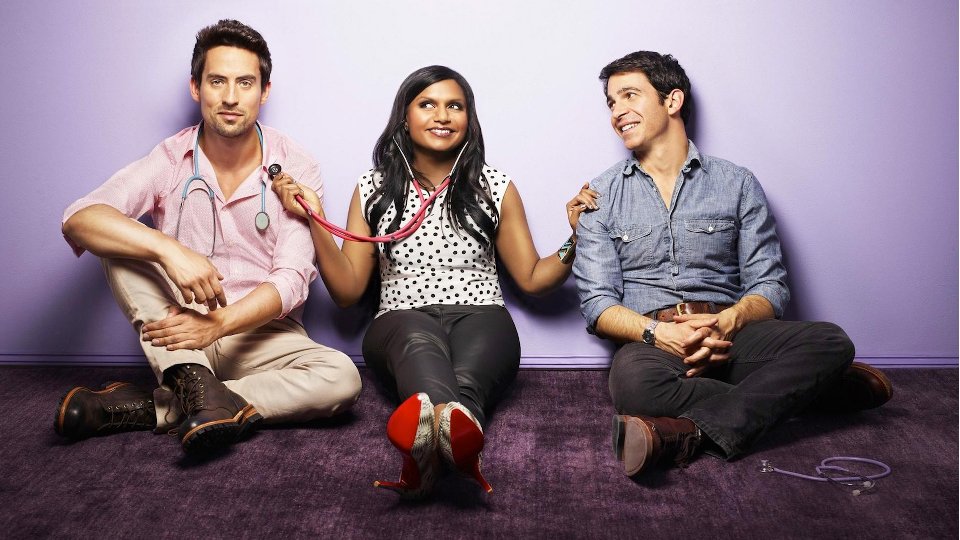 Single obstetrician/gynaecologist Mindy Lahiri (Mindy Kaling) is unlucky in love and finds it hard to meet the man of her dreams. Expecting her love life to be like a romantic comedy, Mindy tries to balance her quest for finding ‘the one’ with working at a small medical practice in New York. Surrounded by a variety of quirky friends and colleagues, Mindy gets through life the best she can with plenty of disastrous dating encounters keeping her on the path to find true love.

The Mindy Project was created by lead star Mindy Kaling, best-known for her role as Kelly Kapoor in The Office US, and she also writes many of the episodes over the course of the first two seasons. In the US the show has struggled in the ratings and was cancelled by FOX after three seasons. Fans were relieved when Hulu picked it up and commissioned a fourth season. The show has proven to be a hit for the streaming service and was recently commissioned for a fifth season.

The setup for The Mindy Project is very simple and it lends itself to plenty of comedy situations. Mindy has a love/hate relationship with her cocky colleague Danny (Chris Messina) that forms the heart of the show and sets up a will they/won’t they potential romance that drives the series. Other characters in the show include former convict turned nurse Morgan (Ike Barinholtz), English supervisor and self-proclaimed ladies man Jeremy (Ed Weeks), and useless nurse turned receptionist Beverly (Beth Grant).

Aside from some cast changes from season 1 to 2, The Mindy Project sticks to a fairly straightforward formula. Each episode Mindy finds herself in a situation she has to deal with or get out of and her fiery relationship with Danny is often explored. One of the best episodes of the first season is Danny Castellano Is My Gynaecologist where Mindy and Danny play a game of chicken when the possibility that Danny may become Minday’s gynaecologist becomes a bit too real.

If you were a fan of Mindy in The Office then you’ll likely enjoy her in The Mindy Project. The two roles aren’t all the different although Mindy in this show is slightly less annoying than Kelly in The Office US. Chris Messina often steals the show with his confident performance as Danny. He creates plenty of tension with Mindy and their relationship really is the hook of the show. I was disappointed to see the departures of Anna Camp and Amanda Setton after the first season but Adam Pally and Xosha Roquemore are great additions to the cast for season 2.

The Mindy Project is one of those shows that’s enjoyable to watch but for me it’s never going to be one I’d make time for in my weekly schedule. It’s perfectly enjoyable and funny enough but it doesn’t really stand out from the wealth of comedies out there at the moment. Still Mindy is loveable enough and the show clearly has a solid fanbase so if you’re looking for a light comedy then you should consider The Mindy Project.