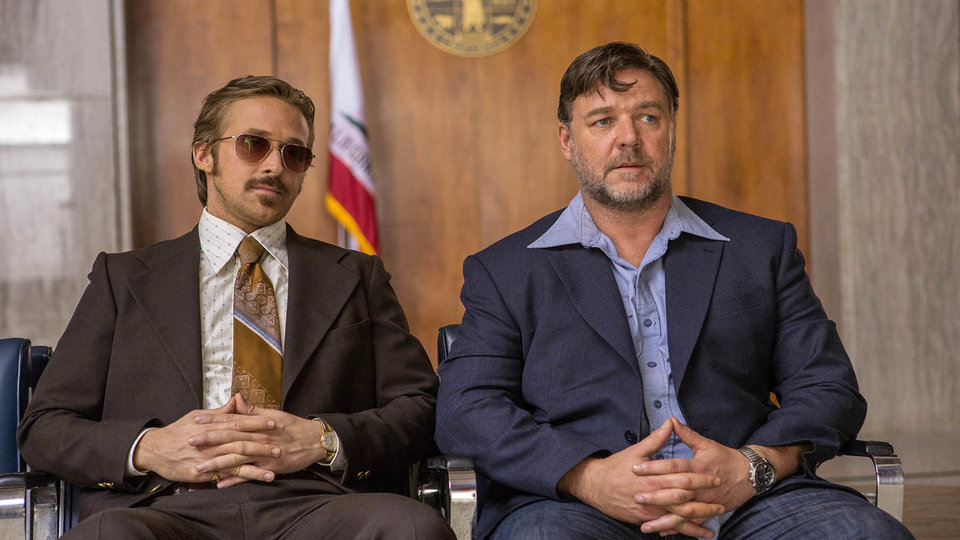 Echoing a lot of his previous work, Shane Black really delivers a crowd-pleasing gem here – a proper throwback to the classic private-eye tales that were so big in the 70s and early 80s. With long-time collaborator Joel Silver acting as one of the producers, The Nice Guys feels like a winner right from the start.

The film hinges on its central pairing and thanks to sensational leading turns from both Crowe and Gosling, The Nice Guys have created a franchise that audiences will want to revisit. Both are on charismatic form, and work off one-another exceptionally well. We’ve seen Crowe play the hard guy before, but his comic-timing here is brilliant. Gosling continues his meteoric rise to the top with yet another marquee performance, showcasing his natural range, professionalism and sheer magnetism. The two are the best on-screen pairing for years and make The Nice Guys an unmissable treat.

With an incredible supporting turn from Angourie Rice as Gosling’s street-smart kid Holly, the young actress surprises everyone and immediately becomes a name to watch out for in the future. This is her first proper film gig but you wouldn’t know it – her performance is wonderful and her chemistry with both Gosling and Crowe is exceptional. Elsewhere, Matt Bomer does well playing against type as the bad guy, and there’s noticeable support from the likes of Keith David and a resurgent Kim Basinger.

The sun-kissed streets of 1970s Los Angeles are perfect for this pulp private-eye tale to take place in. Black knows exactly how to capture the essence of the era with wonderfully constructed set-pieces. In many ways, it’s a simple recipe but Hollywood has constantly over-bakes it in the past. The Nice Guys proves that it can be done right and delivers a hilarious, engaging and exciting buddy-cop movie with bags of potential and lots of style. There’s plenty of humour, it looks glossy and the story keeps you guessing throughout, which makes The Nice Guys one of the most enjoyable movie experiences of the year. Roll on a sequel (apparently set in the 80s)!