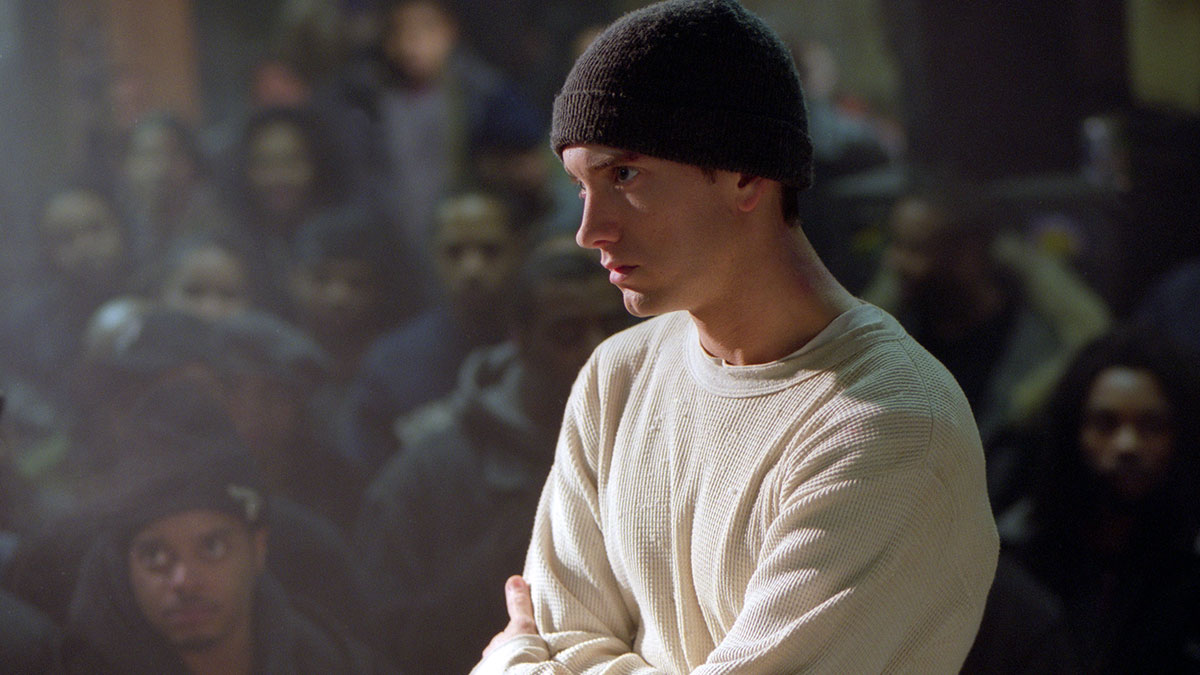 Aspiring young white rapper Jimmy ‘B-Rabbit’ Smith (Eminem) wants to escape his trailer park life, which consists of looking after his little sister and dealing with his wayward mother Stephanie (Kim Basinger). After choking during a rap battle at a local venue, Rabbit begins to wonder whether he has what it takes to make it, and as he pursues his goal he’s drawn into the increasing racial tension that dominates 8 Mile, the road that splits the town in half.

‘8 Mile’ was a huge box office success on its release in 2002. The feature film debut of chart-topping rapper Eminem, ‘8 Mile’ is a semi-autobiographical story that incorporates elements from the star’s life. Anyone that’s listened to his music knows about his upbringing and his difficult relationship with his mother, so it’s not hard to see where the inspiration for much of the material here came from.

With Curtis Hanson (‘L.A. Confidential’) behind the camera, ‘8 Mile’ is much more than an attempt to cash-in on Eminem’s popularity at the team. Hanson brings some weight to the film, as does Kim Basinger who won an Oscar for her work in Hanson’s ‘L.A. Confidential’. Rather than being a shiny, MTV-style film (think Britney Spears’ ill-fated ‘Crossroads’), ‘8 Mile’ is a gritty and unflinching look at the underground rap world that Eminem cut his teeth on.

While Rabbit is trying to focus on his music, he’s pulled between attractive newcomer Alex (Brittany Murphy) and his troubled ex-girlfriend Jeneane (Taryn Manning). He’s also trying to hold down a blue-collar job at a car factory and make time to hang out with his friends, a close circle that finds themselves continually pulled towards trouble. The narrative shows the struggle of Rabbit as he tries to break free of the ties and restrictions around him, to pursue his dreams.

At the centre of everything is of course Eminem, who gives a surprisingly nuanced and thoughtful performance as Rabbit. Over the years many a music star has tried to make it in the movies but so few of them succeed. Eminem comes across natural here, perhaps due to the fact that the material is close to his own life. Kim Basinger is suitably unpredictable as Rabbit’s mother Stephanie but she looks way too glamorous for someone with no money that lives in a trailer.

Extras on the Blu-ray release include the uncensored music video for ‘Superman’, unseen rap battles and a making of featurette.

‘8 Mile’ is a film that stands up nearly 20 years on. If you’re not an Eminem fan, there’s still plenty here to enjoy but if you’re not into rap at all, you may want to give it a miss. With a strong central performance from Eminem, ‘8 Mile’ should be considered a classic and a reminder of what Eminem can do when he’s at his peak. If you’ve not seen it for a while, consider getting this new Blu-ray release!