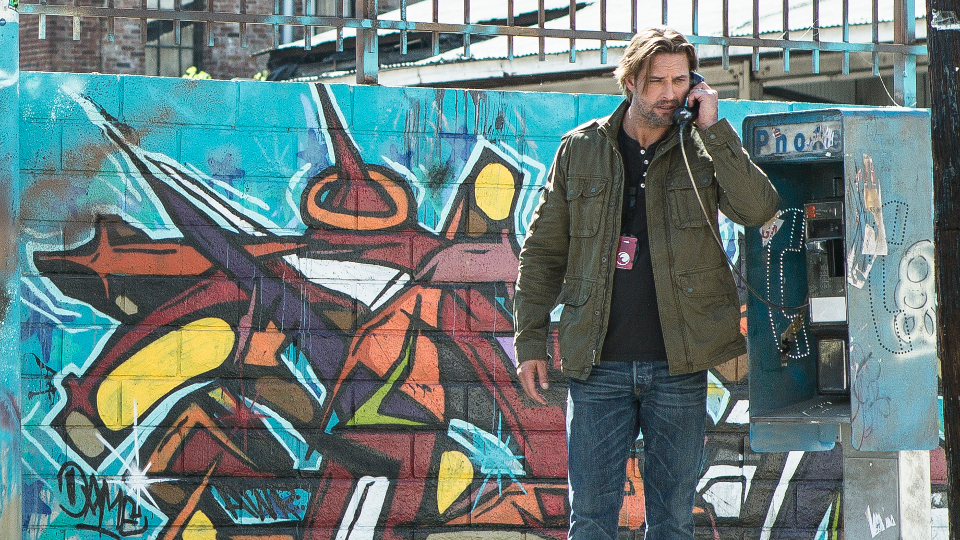 The latest episode of Colony was set one year after the Arrival. People were trying to commemorate the anniversary by releasing laterns with pictures of their lost loved ones. The Red Hats came to stop them and the peaceful gathering turned violent.

Will (Josh Holloway) and Beau (Carl Weathers) convinced Snyder (Peter Jacobson) that they think the Resistance is operating outside the Colony wall. He agreed they could go and take a look as long as they took Captain Lagarza (Gonzalo Menendez) with them.

Beyond the wall they headed to the top floor of a tall building ahead of Lagarza and his team. There they were able to get a good view of LA and the destruction. Will’s plan was to escape by tricking Snyder. He planted some evidence and then he and Beau reported attackers and discharged their sidearms.

They told Lagarza that the attackers had managed to flee and he found the evidence Will had planted. They took it to Snyder to convince him the Resistance were operating beyond the wall. He’d since learnt of a tunnel under the wall and was preparing to shut it down. Will had other ideas and said it could be used as a trap.

Meanwhile, Katie (Sarah Wayne Callies) was meeting with Broussard (Tory Kittles). He took her to meet the new Resistance cell that made contact with him last episode. They wanted to know her experience and Broussard vouched for her telling them he trusted her with his life.

They had a plan to capture a VIP that was due to arrive via the Metro by knocking the train off its rails. Katie questioned their intel and they showed off their secret weapon, a micro UAV designed as a large wasp. It was able to fly undetected to observe and record.

Back at the Bowman household, Bram was gearing up for what looked like another scavenger run. Katie had Resistance plans of her own so wanted him to babysit Gracie. Katie then discovered the book that Lindsey had been using to indoctrinate her and was understandably furious.

Will came home and announced they were all going to leave and live outside the Colony wall. Katie refused so Will finally revealed to her that he’s known all along about her excursions with the Resistance. They both had different opinions on what is right and how things should be tackled and it’s putting huge strain on their relationship.

With Katie refusing to leave, Will had no choice but to stay for now. He told Beau to go ahead as they may not get another chance to escape.

Elsewhere in the episode, Maddie (Amanda Righetti) was forced to clean Cynthia’s kitchen. Reluctantly she did it, then confronted Cynthia and told her of a very expensive art collection. Cynthia recovered the art and Maddie kept the most expensive off the books for her. Snyder and the Red Hats were then alerted to the collection and Cynthia was arrested. Nolan didn’t look too bothered as his wife was carted away so looks like he and Maddie are now free to do what they want.

At the end of the episode, Katie and Broussard assaulted the Metro station, executing any Red Hats they came across. Next the bomb was planted and when the train arrived it was destroyed. Checking the carriages for the VIP they discovered some kind of weird alien cyborg thing. Is it one of the hosts?

The season finale is Gateway. Katie and the Resistance take a valuable hostage, while Will races the clock to find his son.

Tune into Sky 1 at 9pm on Thursday to watch the episode. Preview episode 10 with our gallery below: