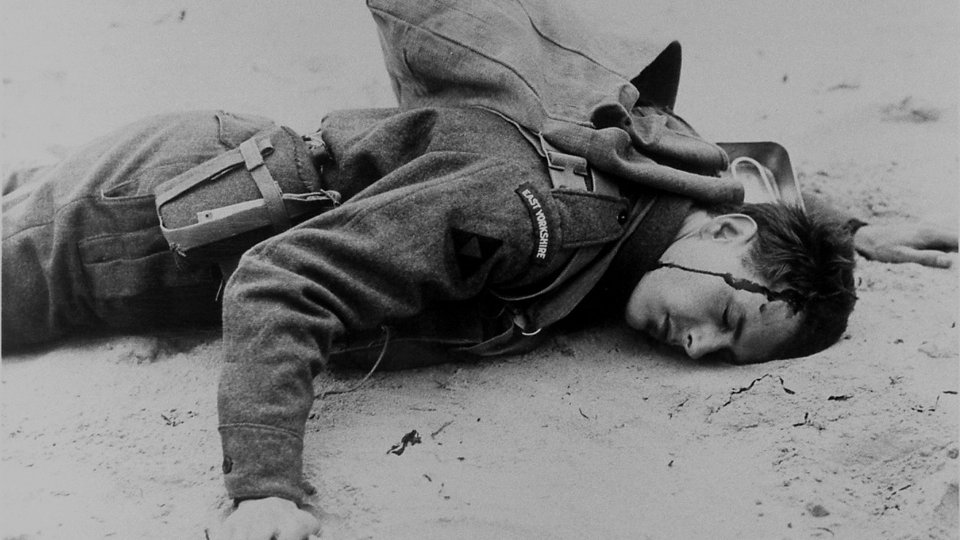 Occasionally a film comes along and shows you something that you have never seen before. It is an incredibly rare treat to discover a film, a sequence or an even a single image that is an entirely new experience. Overlord, a poetic and impressionistic World War II film manages to deliver this on more than one occasion.

The film makes exquisite use of newsreel and wartime footage taken from the archives of the Imperial War Museum, blending it seamlessly into a scripted narrative. Within the archive material there are some moments of true awe, and nothing is more awesome than the Panjandrum. It perhaps speaks to my lack of knowledge on the subject of WWII, but I had never heard of a Panjandrum, or seen a picture of one. Then to see this extraordinary sequence in Overlord – a huge rocket powered wheel careening across the water and onto the shore, laden with explosives – it was a truly jaw-dropping experience. Like something out of steampunk science fiction.

Then there’s the bombing campaigns, seen from the sky as the bombs hit the ground causing the earth to tremor. It is phenomenal footage, and more terrifyingly impactful than any traditional war film could ever hope to achieve.

Directed by American filmmaker Stuart Cooper, Overlord follows young British soldier Tom (Brian Stirner) from when he is called up into service, through his basic training, and then onto the shores of Omaha Beach for the D-Day Landings (or Operation Overlord as it was known in the military).

Cooper’s decision to use real footage interspersed with the drama is an inspired one, and the effect is incredibly convincing. It was achieved by using vintage film stocks, and European camera lenses from the 30s and 40s. The scripted elements were shot by cinematographer John Alcott, the favoured DP of Kubrick.

With all the machinery of war relentlessly moving towards the carnage of D-Day, the movie maintains an intimate poignancy, as it focuses on Tom and his solitary experience. He is not alone of course, there are other soldiers, and he even meets a girl during his training. But the growing sense of dread, the visions of death, and certainty that he will not survive the invasion all add to his isolation.

Overlord can comfortably stand shoulder to shoulder with likes of Saving Private Ryan and Band of Brothers, in its vivid depiction of the citizen soldier, and the tragedy of war, both epic and small.

The disc comes loaded with extras, including a commentary from director Stuart Cooper and actor Brian Stirner. There is a piece discussing the director’s use of the Imperial War Museum archive. Excerpts from the journals of real soldiers are read by Brian Stirner. There are also photos taken by legendary photographer Robert Capa on the beaches of Normandy on D-Day. There is also a fitting tribute to the newsreel and service cameramen who captured all this incredible footage. Also on the disc is A Test of Violence, a short film made by Cooper in 1969, and the original trailer.

Advertisement. Scroll to continue reading.
In this article:overlord, The Criterion Collection