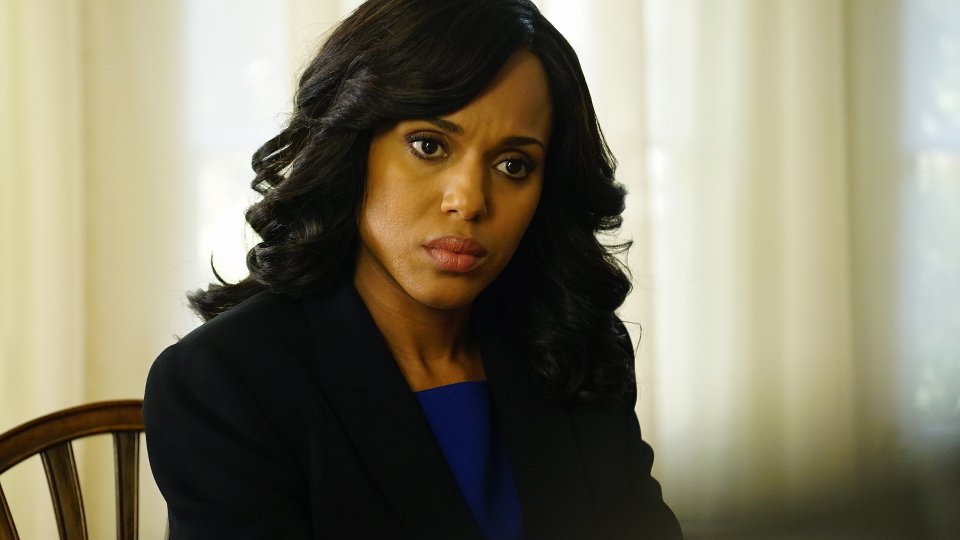 Olivia (Kerry Washington) proved that she wasn’t all that different to her father Eli/Rowan (Joe Morton) on the fifth season finale of Scandal.

If you haven’t seen the fifth season of Scandal and you want to avoid spoilers, we suggest you stop reading now. If you have seen it and want to find out our thoughts on the next season keep reading.

Following much deliberation Olivia decided to ‘save’ Jake (Scott Foley) from her father. What she didn’t realise is that by helping Jake get out from under her father’s influence and onto Mellie’s (Bellamy Young) ticket as VP, she was actually playing directly into her father’s hands.

The other surprise at the end of the season was Cyrus (Jeff Perry) worming his way onto Vargas’ (Ricardo Chavira) ticket and being announced as his choice for VP. Cyrus played a very good game this season pushing Vargas’ brother out of the picture and toying with David Rosen (Joshua Malina).

While the fifth season came to a satisfying conclusion, fans of the show have been taking to the message boards and comment sections to share their dismay over what the show has become. Aside from the Mellie storyline, which I found riveting this season, fans have been disappointed with the treatment that other characters received.

Scandal won’t return until 2017 and the new season will feature 16 episodes following the news that lead star Kerry Washington is pregnant. That should hopefully give the writers some time to retool the show and bring it back to what made it so great in the first three seasons.

I’ve put together my 10 hopes for Scandal when it returns for a sixth season next year.

1. Much less Rowan. Joe Morton is a fantastic actor but his character is stuck in a rut. Rowan’s influence is starting to make much less sense as the weeks go by and somehow he is able to mastermind everything without really doing anything. The constant push and pull with Olivia and Jake is getting tedious and to be honest I hope Rowan would follow B613 and disappear forever.

2. Olivia needs to become likeable again. The character has always acted in a questionable manner but this past season she’s become flat out unlikeable. In the early seasons she was feisty and inspirational, now she’s selfish and power hungry. We need reminding why we loved Olivia so much in the first place.

3. A tight race for the presidential election. The one thing that season 5 got so right was the battle for the party nominations. Watching Mellie, Susan Ross (Artemis Pebdani) and Hollis (Gregg Henry) debating was a complete joy and I equally liked the introduction of Vargas as the Democratic hopeful. I want Mellie to win the race but I don’t want it to feel like a foregone conclusion at the start of the season.

4. Mellicus or is it Marllie? The unexpected sexual tension between Mellie and Marcus (Cornelius Smith Jr.) was something I never knew that I wanted to see. It was also a welcome storyline for Marcus who was underused the entire season. He brings out the best in Mellie and he’s the only one who can tell it to her straight. They had a moment in the finale and I want to see this relationship explored.

5. Quinn (Katie Lowes) and Huck (Guillermo Diaz) to get some storylines. Seriously people, Quinn and Huck are the show’s best assets and all they did in season 5 was run around cleaning up Olivia’s mess. Neither character had a story arc and to be honest they could have disappeared off the screen and it wouldn’t have made no difference to the season. I love these characters and it’s time they got chance to shine again.

6. The season to play out over the course of 5 months. Fitz (Tony Goldwyn) has only 5 months left in the Oval so by the end of season 6 it’s time for a new president. I’m not actually sure what Fitz’s role could be in season 6. Will he support Mellie? I’d imagine so. I’m hoping that it’s not another season of he and Olivia butting heads and destroying each other.

7. Abby (Darby Stanchfield) to start plotting her next career move. The power-hungry character has had quite the transformation since season one as she’s broken out of Olivia’s shadow. Presumably if Fitz is on his way out of the Oval so is she. Abby made it clear that working under Olivia wasn’t of interest to her so I’m interested to see what she’ll do next.

8. Liz (Portia de Rossi) to get her teeth back. What happened to Liz? She was so scheming and manipulative before season 5. Aside from manipulating Susan, Liz’s dastardly days seem to be behind her. She’s a much better character when she’s doing terrible things and I hope she returns to that next season.

9. Cyrus vs Jake. The VP candidates are surely going to butt heads in the most explosive of ways during season 6. With both of them having chequered histories just think of the dirt that could come out if they play nasty. Both candidates could easily derail the campaigns of the presidential candidates.

10. A way to keep Susan Ross. She took herself out of the election race but Susan was one of the shining lights of season 5. I don’t care how they do it but she needs to stick around. She brings much needed humour to the show and she’s one of the only characters with a good heart.

Scandal will return to ABC in the US and Sky Living HD in the UK in 2017.