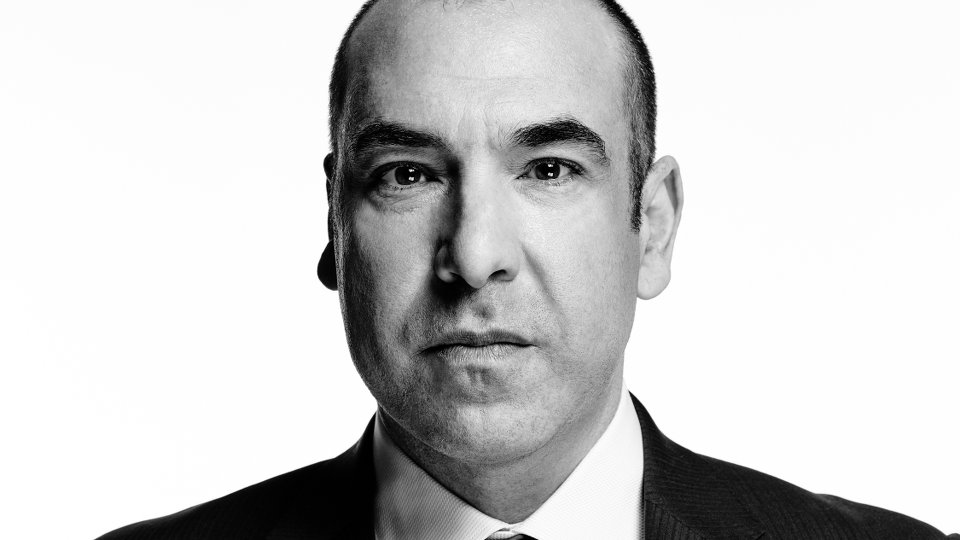 Suits has established itself as one of the most popular legal dramas over its past five seasons.

Heading into its sixth season next month, fans will have the opportunity to brush up on the latest season with the Blu-ray and DVD release of season 5 on Monday 6th June 2016.

The fifth season of the show is a bit of a game changer with the very real threat of Mike’s (Patrick J. Adams) secret coming out and ruining the entire firm. Is time finally running out for the plucky pretend lawyer?

To celebrate the release I caught up with Rick Hoffman who plays fan favourite Louis Litt on the show.

If you haven’t seen the fifth season yet and want to avoid spoilers, we suggest you proceed with caution as key plot details from the season are discussed.

During our chat we talked about the complex nature of Louis’ character, Rick’s love of working with his co-star Sarah Rafferty who plays Donna, and I tried to get some information out of him about season 6.

Season 5 has been pretty complex in terms of your character Louis. What’s it like to play such a complicated character?

(laughs) First of all I’ll start off by telling you if any actor complains about this type of experience, find a new job! I don’t necessarily think this (season) is (his) most complex. I would say when he found out about Mike’s lie that was (his most complex) for him personally. For the firm…absolutely this season. Louis was sort of a utility guy to put out fires until it turns out it was his ex-girlfriend that tipped off Gibbs. Now he’s been pushed back into it but I think every season there is some unbelievable conflict that he has to overcome. Every year it’s like ‘how the hell am I going to do this as an actor? How the hell am I going to accomplish what they want me to accomplish?’ It’s scary as hell, challenging as hell and then more times as not rewarding as hell when I feel like I’m proud of what’s been done.

You do a really fantastic job of making Louis likeable even though he’s done plenty of unlikeable things over the years. How do you bring that humanity to the character?

I think it’s Aaron Korsh and the writers that have really built the dimensions of this guy starting off as this one level douche bag and transitioning him very slowly in to someone who is insightful to some degree and reflective. He’s evolved the most out of the six characters over the five seasons and yet he’s still broken. It’s an interesting type to watch. It’s hard at times to watch and at other times it’s insanely engaging. The mudding is ridiculous. Who the hell does that?

Where did the idea that Louis enjoys mudding come from?

I forget which writer it was but somebody came up with this whole hilarious hobby.

It’s a total Louis thing to do though isn’t it? You can believe that’s what he enjoys doing.

It is Louis! That, cats and the ballet…ballet isn’t too far out there but the whole cat obsession combined with mudding, that’s just like a 1-2 punch that makes you go ‘wow this is whack-a-doodle’.

In season 5 we get to see a lot more of the relationship between Louis and Donna. What’s it like for you to get to work with Sarah Rafferty a lot more this season?

When we found out we were going to be working together more, Sarah and I were both like ‘this is great’ because we’re used to doing a lot of those comedic scenes. It was a very different dynamic this season because it was all serious. We were off in our expectations of the type of fun (we’d have). It’s a little bit of a different process when we’re doing dramatic scenes. We were just used to laughing a lot together. It’s always my most favourite moments of these past few years working with Sarah but the process this past season…I think we just wanted to just have a party together but we actually had to use different parts of our brain (laughs) so it’s a different type of feeling. In terms of comfort, we talk in short hand together. I can’t tell you how great it is for actors who enjoy what they do to work together for a long period of time. It’s this experience of peak happiness that I just can’t describe.

We’ve got to learn more about Louis’s family this season with the introduction of his sister. Can we expect further exploration of his family in season 6?

Well we loved Amy Acker who played his sister. Knowing Aaron he loves to use the actors from the past so that’s not out of the question. The two actors that played my parents are actually my real parents and they’ve been used twice (laughs). I’m not sure if he’ll be Skyping them this year. He has two parents and a sister so we’ll see. I don’t know what else…maybe something like an illegitimate child (laughs), I don’t know what’s going on with him and his family. There’ll be a lot more fun coming up in the next season for Louis, a lot more comedic scenes – that I’ve been told.

Should fans hold out any hope for Louis and Sheila?

If I tell you anything right now depending on where people are in the season….let me just say it’s dim. Where they’re going right now – he wants children, she doesn’t – there’s the trial that’s caused a tremendous wedge and I don’t know if they can put the pieces back. I’m not sure if they will.

This season has really changed the show in terms of Mike’s secret finally coming out. Should we expect a pretty big change going into season 6?

Here’s what I can tell you. I will say if you’re a fan of this show, the ones who have watched from the beginning, you will not be let down with this season (season 5) and now I know something about the next you definitely won’t be left down.

Is there a storyline you’d like to see happen for Louis that hasn’t been explored on the show yet?

Me personally, I’d like to see Louis do some business in the Caribbean. Preferably Anguilla for about 10 days, maybe hooked on frozen drinks and getting a nice tan while doing business.

You’ve thought about that haven’t you?

I’ve thought about that for a very long time!

You mentioned before that you and Sarah always have a great time working together. It feels like it’s a tight knit cast and crew on the show. Is that true and do you still have fun 6 years in?

Yeah, I’ve heard it recently on Twitter with people saying ‘you guys make it fun’ like they want to be there. When I was younger I used to see certain movies and it just looked like everybody was having so much fun. We’ve been together now 5 years, and obviously everyone has their stuff, but we’re like a family. We have a legitimate amount of fun doing it. We’re all committed. I don’t know…that whole cliché about ‘everybody loves each other’ but look there are moments where Meghan (Markle) wants to rip my face off (laughs). She’s like my little sister! There’s a genuine respect for each other and we all like each other. There’s none of that weird bullshit you hear about in other casts.

Suits Season 5 is available on Blu-ray and DVD from 6th June 2016, courtesy of Universal Pictures (UK)

Advertisement. Scroll to continue reading.
In this article:Rick Hoffman, Suits