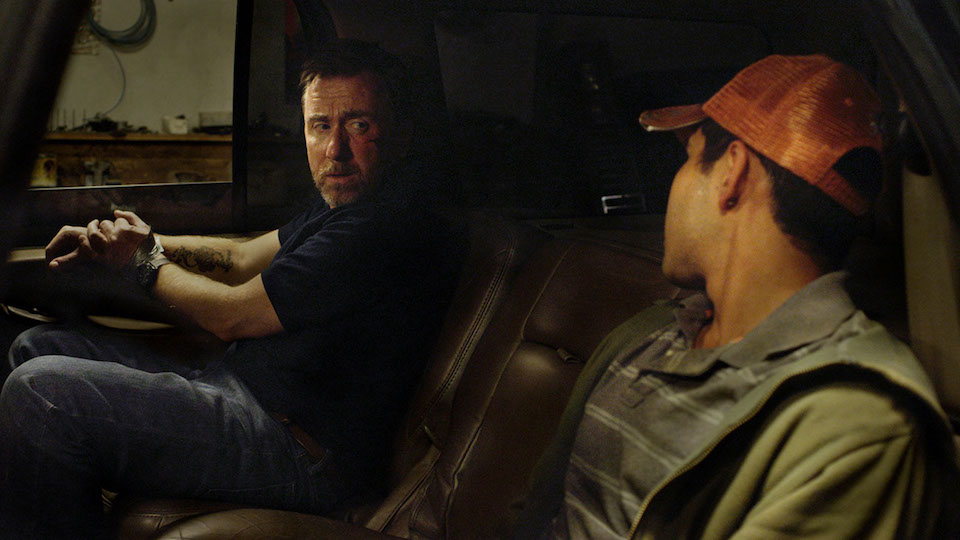 This is a very neat and tidy thriller from first time director Gabriel Ripstein. There is not an ounce of extraneous fat, a single wasted frame or superfluous line of dialogue to be found in 600 Miles. The credits start rolling on this one before it even hits the 80-minute mark. Proving once and for all that you don’t need two hours plus to tell a story well.

A contemporary western on the Arizona/Mexico border, 600 Miles introduces us to Arnulfo (Kristyan Ferrer), a young smuggler, carrying legally purchased guns into Mexico for his uncle’s cartel. The early scenes depicting this business deliver (for non US viewers anyway) a terrifying glimpse into the gun trade, and the ease with which everything from handguns to military grade assault rifles are bought by anyone with a clean criminal record.

Arnulfo is clearly not cut out for this sort of work, and he makes a big show of appearing tough with his American friend who conducts all the business. Underneath, however he is a naïve, sensitive and confused boy. He desperately wants to impress his uncle, and his uncle’s associates, and we see him nervously rehearsing what he is going to say before he meets with them.

Unfortunately for Arnulfo, his border crossing activities are being monitored by the Feds, specifically ATF Agent Hank Harris, played by Tim Roth, who also executive produces. Hank has been building a case for some time, and then sees a chance to make an arrest on his own without back up. It goes wrong, and Hank is taken hostage and driven by Arnulfo to meet his uncle. The ensuing 600 mile road trip takes up the bulk of the film, and smartly subverts the genre conventions, with the outlaw taking the law man to the gallows.

There really is a great deal to applaud in this well made and engrossing film. The characters are intriguing and well written, and both lead actors are on superb form. Despite being set on the US/Mexico border and dealing with smuggling and cartels, the execution of the film is impressively understated. There is no Scorsese riffing soundtrack, fast editing or showy camerawork. There is nothing to distract from the drama, from Arnulfo, and his terrifying predicament.

And then there’s the ending. Like something out of a Cormac McCarthy novel, this low-key gut punch of a finale will both shock and amaze. I genuinely hope that Gabriel Ripstein is given more opportunities to write and direct, because on this evidence, he is a real talent.