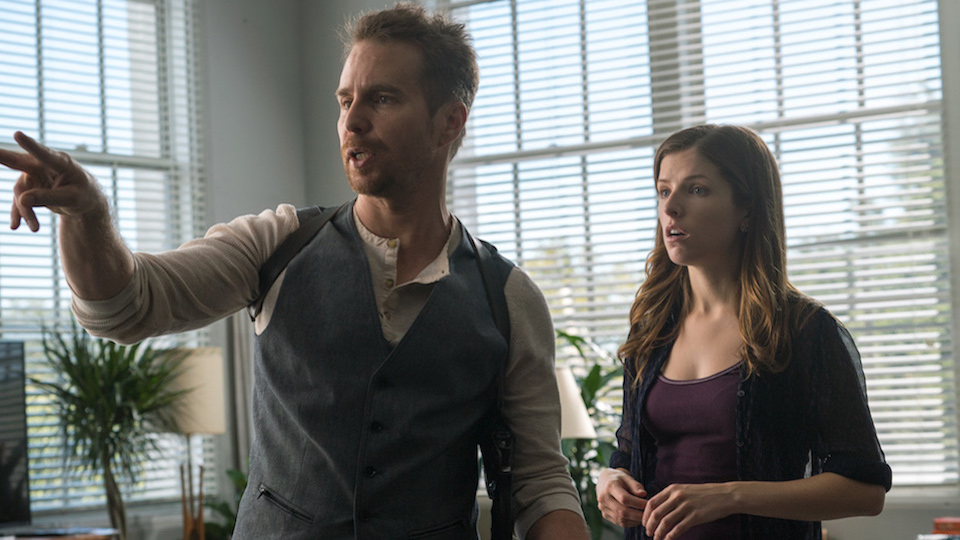 So….murder is good? Or is it bad? After watching Mr. Right I’m not entirely sure what writer Max Landis and director Paco Cabezas were going for with this violent rom-com thriller. I know I enjoyed myself, and I certainly laughed a lot whilst watching the film, but there is a thematic murkiness that leaves a really bad taste.

Anna Kendrick plays Martha, a deeply neurotic and unlucky in love young woman, who after another bad break up and subsequent decline into drunken depression finally meets the perfect guy. Her Mr. Right is Francis (Sam Rockwell), a dancing rogue hitman with jedi reflexes. But here’s the twist, he only kills the people who hire him. Because get this, murder is wrong.

The traditional romantic, getting-to-know-you scenes are the best part of the film. Anna Kendrick is utterly adorable and hilarious, and Sam Rockwell is terrific as the charismatic and borderline psychotic killer looking for love. He is completely honest with her about what he does, but wouldn’t you guess, she just thinks he’s being cute. And then she sees him murder a guy. Uh-oh. Things are further complicated when the shady special ops spooks who trained him turn up to bring him in.

It is clear from the word go that this film is tonally pitched at a level somewhere north of absurd. To enjoy the film, you will need to tune into this pitch and just go with it. If you go with it, the wit and chemistry of Kendrick and Rockwell will just breeze you along for 90 minutes. If you resist in any way, you will likely hate every second of it.

When the action thriller side of the plot shifts into gear, it is dumb beyond belief – but luckily the film knows it, and gleefully comments on it. A group of idiotic New Orleans gangsters enter the fray, and the scene is set for a pulpy bloodbath. Francis’s “code” of only killing his clients is thrown out the window, and Martha is more than happy to waste a few bad dudes too. Yay murder!

Falling somewhere between Knight and Day, The Bourne Identity and Grosse Point Blank, Mr. Right is a fun yet forgettable little indie film that skates by on the charm of its two terrific lead actors. But be warned…it’s very quirky. If you are in any way allergic to quirk – we’re talking dancing assassins who wear clown noses levels of quirk – then you might come out in hives. Oh and every character, and I mean EVERY character is a complete fucking psychopath.