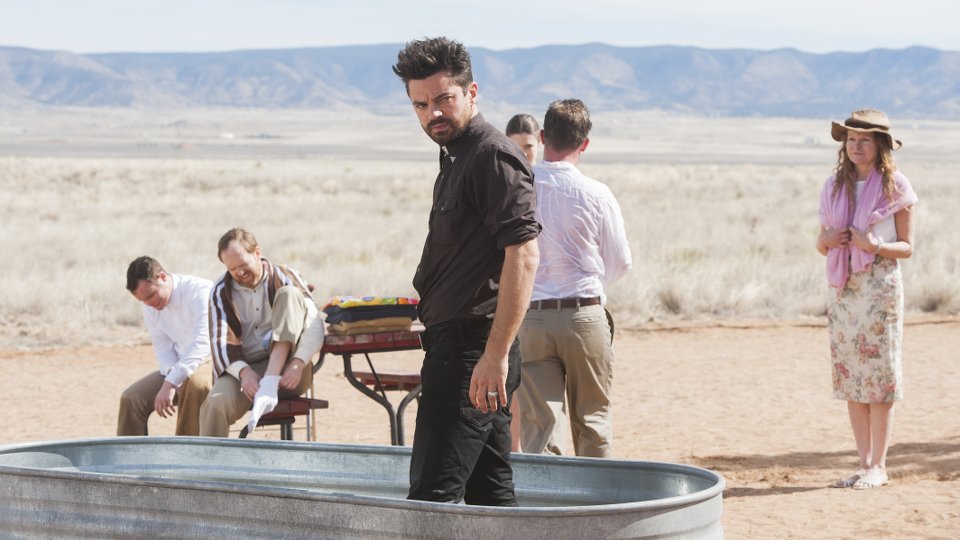 Preacher arrived in the UK today, less than a day after it premiered on AMC in the US.

Following the story of Jesse Custer (Dominic Cooper), a small town preacher on a mission to find God, Preacher is based on the comic book series created by Garth Ennis and Steve Dillon.

In the first episode of the season Jesse is shown to be struggling with his calling and considering giving it all up. That is until a mysterious entity enters his body and gives him a new purpose. Unbeknown to Jesse, he now has the power of persuasion and he inadvertently caused a very bloody and messy situation for one of his followers that had been pestering for advice.

We were also introduced to Jesse’s ex-girlfriend Tulip (Ruth Negga), a feisty bad influence destined to bring Jesse’s dark past back into the open, and Irish vampire Cassidy (Joe Gilgun) who made an unforgettable entrance after a bloody fight on a plane that ended with him crash-landing and surrounded by his intestines.

The next episode of the season is See. Jesse tries to be a “good preacher,” unaware that a mysterious duo is after him. Meanwhile we meet the enigmatic Cowboy.

Tune in to AMC at 9/8c on Sunday 5th June in the US and Amazon Prime Video on Monday 6th June in the UK to see the episode. Preview it with our gallery below:

Advertisement. Scroll to continue reading.
In this article:Dominic Cooper, Preacher