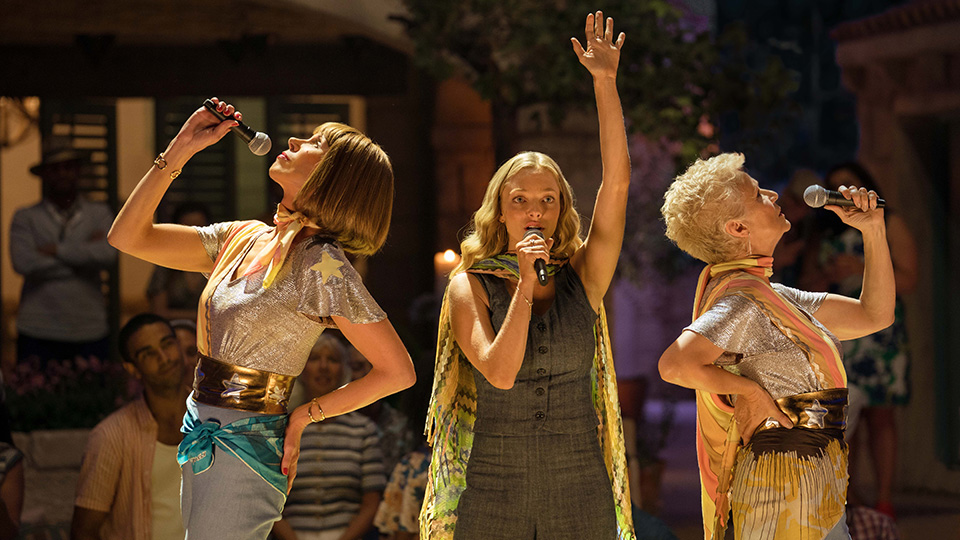 This review contains spoilers about Mamma Mia! Here We Go Again. If you don’t want to know anything about the film or its storyline, stop reading now!

The 2008 big screen adaptation of West End hit Mamma Mia! was a huge success bringing in more than $615 million at the global box office. The film centred around Donna (Meryl Streep) and her soon-to-be-married daughter Sophie (Amanda Seyfried) with the gorgeous backdrop of Greek Island Kalokairi as the setting. Interspersed with the songs of ABBA, Mamma Mia saw Sophie trying to find out the identity of her father after inviting the three potential candidates to her wedding without telling her mother. Cheesy the film most definitely was but it was a joyous guilty pleasure that struck a chord with filmgoers across the world.

10 years on and the inevitable sequel has arrived with audiences holding very high expectations. Mamma Mia! Here We Go Again takes you back to Kalokairi where Sophie is preparing to open her mother’s newly renovated villa to commemorate her memory with Donna having passed away a year earlier. The sequel takes place over two timelines with Sophie’s story unfolding as viewers get to see Donna’s first summer in Kalokairi where she fell in love with the island and became pregnant. Mamma Mia! Here We Go Again has a very similar feel to the original film but it struggles to capture its magic.

At a lengthy almost 2 hours, the film crams in plenty of ABBA songs but a lot of the audience will probably never have heard of them. While there are some hits in there such as Knowing Me, Knowing You and I Have a Dream, there are plenty of songs that wouldn’t be considered ABBA classics and they don’t hit the mark. Familiarity was part of the original film’s charm and that gets lost in the mix this time round.

The new cast members playing the younger versions of the six central characters are among the best part of the film. Lily James puts in a fantastic and energetic performance as Donna while Jessica Keenan Wynn and Alexa Davies impressively mimic Christine Baranski and Julie Walters as Tanya and Rosie. Cher is also magnificent as Donna’s mother Ruby but she only arrives in the the last 20 minutes or so and most of her performance has already been online for a while now. Her rendition of Fernando is without a doubt the best musical moment in the film.

The original cast are under-utilised and feel superfluous to the story. Meryl Streep is in the film for around 5 minutes and Pierce Brosnan caused plenty of unintentional laughter with his sub-par singing. Similarly Dominic Cooper, Stellan Skarsgard and Colin Firth have barely any screentime and the addition of Andy Garcia is one that doesn’t really work thanks to his scenery chewing performance. I also found the green screen work very distracting and for a film with a significant budget, it frequently felt a little cheap and rough around the edges.

As the credits rolled I couldn’t help but wonder what the point of Mamma Mia! Here We Go Again was. Had the film focussed solely on the life of young Donna, it probably would have been much better but the dual storyline felt clunky and an attempt to keep the original cast. Whereas Mamma Mia! is entertaining and fun, Mamma Mia! Here We Go Again is a disappointment that is sure to make a ton of money at the box office but I wouldn’t be surprised if fans are left underwhelmed. This really is a good example of when a film didn’t need a sequel.