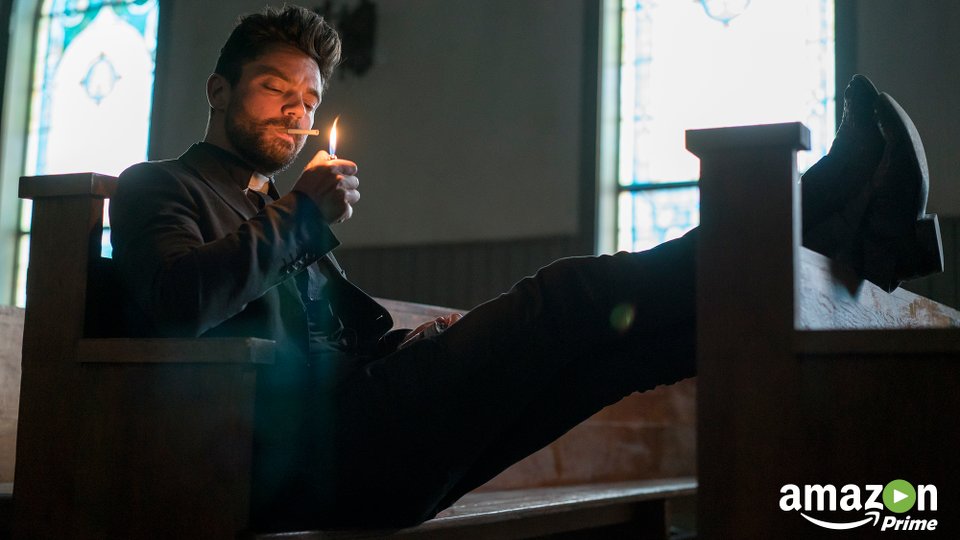 The highly-anticipated new TV series Preacher will debut exclusively on Amazon Prime Video in the UK it has been announced.

Arriving on 23rd May 2016, with subsequent episodes launching on Mondays from 6th June 2016 (one day after they air in the US on AMC), the series is produced by Seth Rogen, Evan Goldberg (This Is The End, Superbad, Bad Neighbours) and showrunner Sam Catlin (Breaking Bad). It is based on Garth Ennis and Steve Dillon’s comic book of the same name.

Preacher is a supernatural, twisted and darkly comedic drama that follows a West Texas preacher named Jesse Custer (Dominic Cooper – Warcraft, Agent Carter), who is inhabited by a mysterious entity that causes him to develop a highly unusual power. Jesse, his badass ex-girlfriend Tulip (Ruth Negga – Agents Of S.H.I.E.L.D, World War Z) and an Irish vagabond named Cassidy (Joseph Gilgun – This Is England, Misfits) come together and when they do, they are thrust into a crazy world populated by a cast of characters from Heaven, Hell and everywhere in between.

“Preacher is one of the most ambitious and highly-anticipated new series of the year, and exactly the kind of show we want to bring our Prime members around the world,” stated Brad Beale, Vice President of Worldwide Television Acquisition for Amazon. “Sitting alongside shows like The Man in the High Castle, Transparent, Mr Robot, Fear The Walking Dead and the upcoming Clarkson, Hammond and May show, The Grand Tour, Preacher is another great addition to our line-up and we think our customers are going to love it.”

Amazon customers who are not already members can start a 30-day free trial of Amazon Prime by visiting www.amazon.co.uk/prime.

The deal was signed with Sony Pictures Television for Amazon Prime Video in the UK, Austria, Germany and Japan.

Watch the trailer for Preacher below: