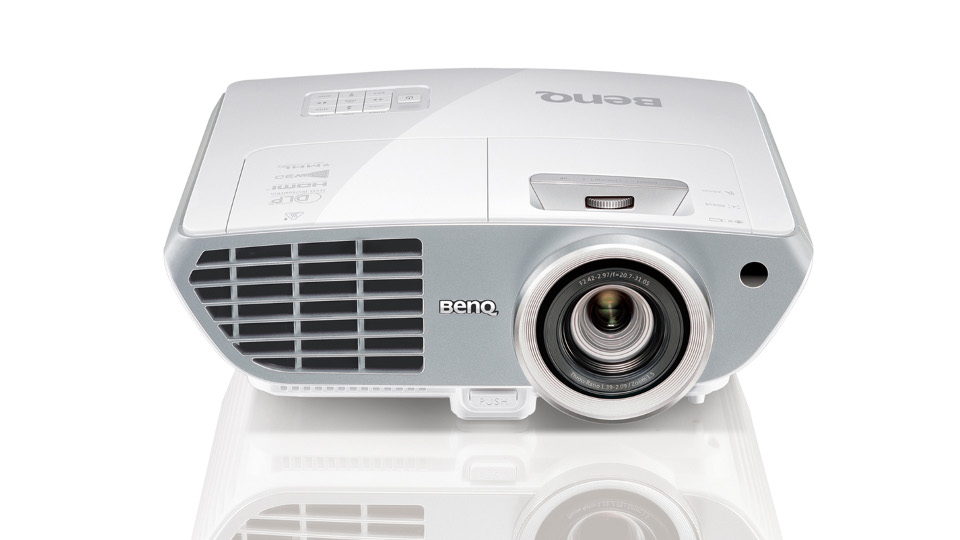 Last July we reviewed the W1070+ projector from BenQ. The past month I’ve been taking a look at its bigger brother, the BenQ W1350, to see if it’s worth the extra cost.

Out of the box it’s clear this is a different DLP projector to the W1070+ as a quick glance reveals a bigger lens. The W1350 has a new trapezoidal shape which I must say is rather attractive and a little less boring that the standard cuboid chassis many projectors seem to have.

Setup is relatively simple and requires connecting a power lead and input source. I strongly recommend picking up the optional BenQ Wireless Full HD Kit (WDP01 – costs around £299). The kit removes the need to have lots of wires to route and hide. Instead a small receiver box is attached to the projector and a transmitter box to the device that outputs a signal such as your Sky TV box or PS4. Once connected and powered up the wireless kit just works.

Like the W1070+ you’re spoilt for choice when it comes to connecting your various devices. On the back you’ll find two HDMI connectors (one with MHL support), USB, Mini-USB, VGA, RS-232 and Component inputs.

Positioning the projector is easiest again with the wireless kit. Otherwise you may need to re-jig your room somewhat in order to have the projector close enough to reach your devices with cables. There’s no need to position it dead center or even to ceiling mount it thanks to good keystone and vertical lens shift features. I chose to have it sat on a small table in the back corner of the room and after a little tweaking the picture looked fantastic.

Just 2.5m of space is needed to project an impressive 100 inch image. Moving it further allows you to go right up to 325 inches Also to consider when positioning the W1350 are that the air vents have plenty of space around them as it can get rather hot. It’s also fairly noisy so if you can avoid sitting close that would be advised.

One way to combat the sound is to up the volume. The W1350 features a fairly decent 10W speaker but if you have a decent sound setup it’s better to mute the projector and use that instead.

The W1350 is capable of outputting Full HD 1080p images and the extra brightness over the W1070+ is noticeably better at 2500 Lumens. The contrast ration remains the same at 10,000:1. It also supports 3D which looks fantastic and there’s a single pair of glasses included in the box.

The lamp has a shorter life than that of the W1070+ at up to 4,000 hours. However this should still last you a good three years if you averaged watching one film per day.

Returning from the W1070+ is the fantastic remote control. The best thing about it still is the built in red backlight allowing you to easily see the buttons while viewing in a dark room.

The W1350 worked wonderfully well with Blu-ray movies and gaming on Xbox One and PS4. There was no noticeable lag during gaming and the large image makes things far more immersive than playing on a smaller screen.

The picture quality is impressive and looks best in lighter scenes. At times dark scenes feel a little lacking but these felt improved using the Eco mode. Due to being a DLP projector there was also noticeable rainbow effect which can occasionally be distracting.

View some more images of the BenQ W1350 projector in our gallery below:

Overall the BenQ W1350 impresses as a budget home cinema projector. The extra cost over the W1070+ brings you a bigger and better picture. It works best with the wireless kit and I’d recommend the projector to anyone who enjoys regular movie and game nights.

For more details check out the official BenQ website.

In this article:BenQ, Projector, W1350