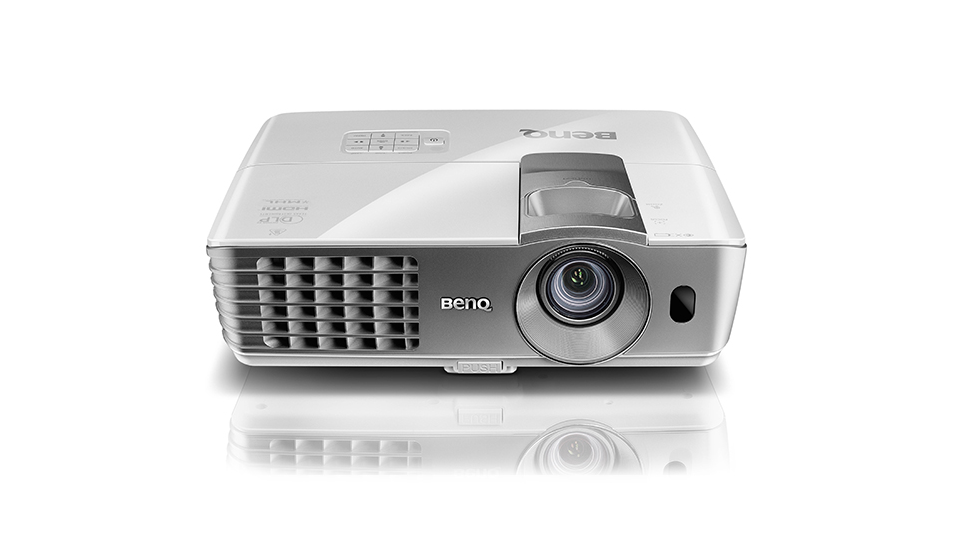 If you’re big into entertainment such as films, TV or games then it’s worth investing in a decent setup to watch them on. Large flat screen TV’s are now incredibly affordable but another great option to consider is a home projector. We’ve spent some weeks testing out BenQ’s W1070+ kit in a variety of scenarios to see if it’s worth your hard earned cash.

The W1070+ is an improved version of the previously released W1070 model. At first glance it seems almost identical with the same DLP DarkChip3 processor and only some minor differences in the control you have over the picture. Two big differences though, and the reason to go with this newer model, are the inclusion of support for MHL (allowing you to connect supported mobile devices) and the optional Wi-Fi kit.

Setting the W1070+ up is as simple as getting an input signal and power to the projector. The process is even simpler if you buy the optional BenQ Wireless Full HD Kit (WDP01 – costs around £250). With the wireless kit you connect the small receiver box to the side of the projector and then the transmitter box to the device that outputs a signal such as your Satellite TV box or games console. Doing so allows you to then easily position the projector without lots of wires to route and hide. The best thing about the wireless kit is it just works and there is nothing fancy to do other than plug it in.

It’s easy to connect almost any type of input to the W1070+ thanks to the inclusion of a wide range of inputs. On the back you’ll find two HDMI connectors (one with MHL support), USB, Mini-USB, VGA, RS-232 and Component inputs.

The W1070+ is a short-throw projector so it only needs 2.5 meters of space from a flat surface to project an impressive 100” picture. It’s like having your own personal cinema. It’s also possible to position the box in a variety of ways. You can buy an optional ceiling mount if you like but it works just as well sat on a table. The projector has a neat lens shift feature allowing you to move around the projected image to avoid furniture that might be in the way. Putting the projector central to the surface you want to project onto is also not required. So you can place it in the corner of a room and then use the keystone controls to adjust the image to accommodate for the angle.

After turning the W1070+ on it takes just a few seconds to warm up before you can begin viewing. It does get rather hot during use so it’s essential to ensure it has good ventilation around the vents. The fans inside work hard to keep it cool and can be a little noisy so it’s best if you’re not sat right next to it. However if you’re using the in-built speaker or have a home cinema sound system you’re unlikely to notice the sound of the fan during viewing.

A handy remote is included to let you control most of the features of the projector. Best of all it has a nice backlight on the buttons so you can easily see what you are doing in the dark. Some buttons bring up an on-screen menu system allowing you to configure the many options. These menus are easy to use and have been improved over the 1070 model.

The W1070+ puts out a Full 1080p HD image which is a resolution of 1920×1080. This makes it a perfect choice for watching HDTV, Blu-ray or console gaming. It’s also capable of displaying 3D content but each viewer needs a pair of active shutter 3D glasses which can be bought for around £50.

We’ve tried the W1070+ out with HDTV, Blu-ray movies and PS4 and Xbox One games consoles. In all situations the picture produced, especially considering the relative low cost of the projector, is absolutely outstanding. 1080p content is displayed with crisp visuals. Gaming in particular impressed with no noticeable lag even when using the wireless kit. Once you’ve played games on such a large display it’s hard to go back to a smaller screen. There’s an improved level of immersion and you can really appreciate the detail even more plus picking out things in the distance is much easier.

Overall we’ve been incredibly impressed by the BenQ W1070+ projector. It performs well in all situations and is very simple to use. If you’re looking to create your first home cinema setup then we can’t recommend the BenQ W1070+ enough.

For more details check out the official BenQ website.

Advertisement. Scroll to continue reading.
In this article:BenQ, Projector, W1070+