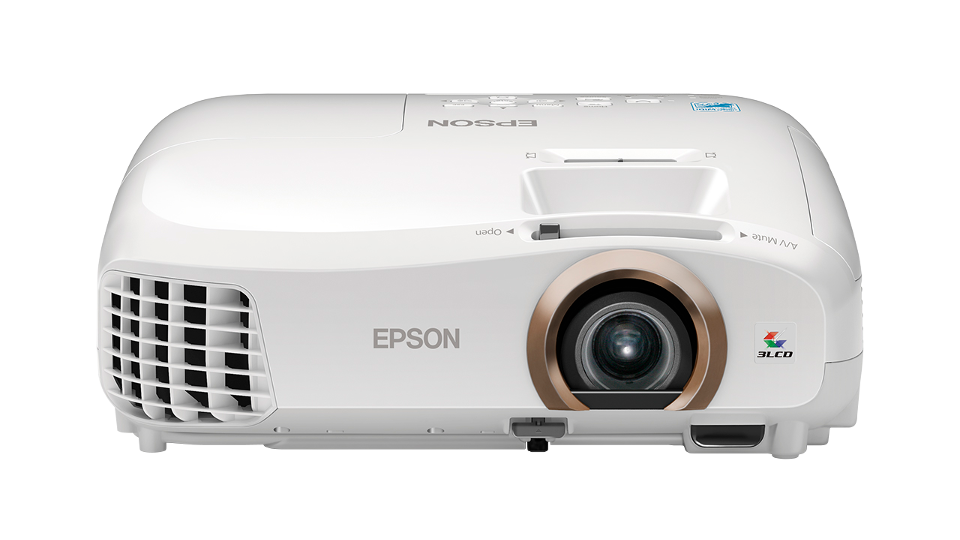 When you think of Epson you probably think of devices like printers and scanners but did you know they also make projectors? I must admit, I didn’t until I was asked to check out the Epson EH-TW5350 projector from their Home Cinema range.

TV’s keep getting larger, thinner and cheaper but if you’re really into watching movies and playing games then trust me you should investigate purchasing a projector. In recent years the technology has improved a great deal and the prices have dropped considerably making them rather affordable.

The EH-TW5350 sits at the cheaper end of the Home Cinema scale at around £600. You can find even cheaper projectors available but it’s also not uncommon to pay closer to £1000. If money isn’t a problem then you can pay into the thousands for some of the new high-end laser projectors.

The EH-TW5350 takes just a few seconds to take out of its box as there are only 3 things inside – the main projector, a power lead and a remote control. As far as projectors go the EH-TW5350 is rather attractive to look at with a glossy white curved chassis.

The remote control is rather small and chunky but it fits in the hand well. Sadly there’s no backlight option so the remote buttons are difficult to see in a dark room when watching something. However you can also control the projector via the Epson iProjector iOS/Android app.

Connecting it up is incredibly easy and simply requires you to plug in the power lead and choose an input. It’s easy to connect your favourite devices with the inclusion of 2x HDMI (including one with MHL support for your smart devices), VGA and composite. There’s also a USB 2.0 port to allow you to connect devices such as a camera or external storage. Other input options available are Miracast and Wi-Fi Direct support.

To prevent needing long cables to the projector and to help keep things tidy I opted to use it with BenQ’s Wireless kit (WDP01) which is available for around £299. This attaches a small receiver box to the projector that communicates with a sender box attached to your devices. It worked flawlessly with the Epson EH-TW5350.

The EH-TW5350 can be positioned easily in a variety of configurations depending on the size and shape of your room. It’s capable of projecting an image as small as 34inches up to 332inches with a 50inch picture possible from just 1.5m and a 150inch image at 4.5m.

Gone are the days of needing to mount a projector to a ceiling in the center of a room – it’s possible to simply have the projector sat on a table. I chose to place it in the back corner of my lounge on a small table. This is possible as the projector doesn’t need to be facing straight at the wall and can be as much as 30 degrees to the side. There’s a simple manual keystone control on the top to adjust the image so it’s straight again.

There is no vertical shift present on the EH-TW5350 but it gets around this with a simple height adjustable stand on the front bottom. The back feet are also adjustable making it easy to get the image positioned just as you want it. Manual zoom and focus rings also let you get the size just right and allow you to ensure the image is crisp.

The EH-TW5350 is an LCD projector capable of outputting 2,200 Lumen which drops down to 1,500 Lumen in economy mode. The picture output is full 1080p HD with an impressive 35,000:1 contrast. Also impressive is the 200W lamp life which is rated as up to 4,000 hours or 7,500 hours in economy mode. Epson claim this would allow you to watch an average length movie every single day for 11 years. The lamp will degrade more over it’s lifespan than those found in DLP projectors but being an LCD based projector gives the benefit of none of the DLP’s rainbow effect.

There’s a built-in 5W speaker on the EH-TW5350 but it’s not much to shout about. You’ve likely already got a decent sound setup so this can simply be muted.

While in-use the projector can be a little noisy depending on where it’s positioned in relation to where you are sat. It’s definitely a lot quieter in economy mode. It’s rated at 37dB in normal mode and 27dB in economy. If you’re not using it for a short time, such as popping to the kitchen to make some drinks, there’s a handy A/V mute option to blank the screen.

The EH-TW5350 performed well with all its different inputs but it looks best when give full HD to display. Scenes look fantastic with exceptional detail and the colours are vibrant. It worked great with Blu-ray movies and gaming on the Xbox One. Having such a big screen at home feels almost as good as going to the cinema. It also really increases immersion when gaming and it’s also easier to see objects in the distance, I found racing and FPS games brilliant on it. It’s also worth mentioning there is 3D support if you have active shutter glasses.

The only downsides I found with this projector were that in particularly dark scenes the black wasn’t always quite as black as it maybe should be. Also there’s a feature call Frame Interpolation capable of calculating extra frames for smoothness, this sometimes made video seem to speed up. Playing with the settings based on what you are watching is worthwhile and the more you use it the easier it gets to tweak. These are only small gripes though because for the money the picture is fantastic.

Overall I’ve been incredibly impressed by the Epson EH-TW5350. Considering it’s essentially a budget projector the image quality is stunning. If you spend a lot of time watching movies or playing games then you should seriously consider this projector. Also if you don’t need some of the features such as Wi-Di and Miracast you could look at the cheaper TW5300 or TW5210.

In this article:Epson, Home Cinema, Projector