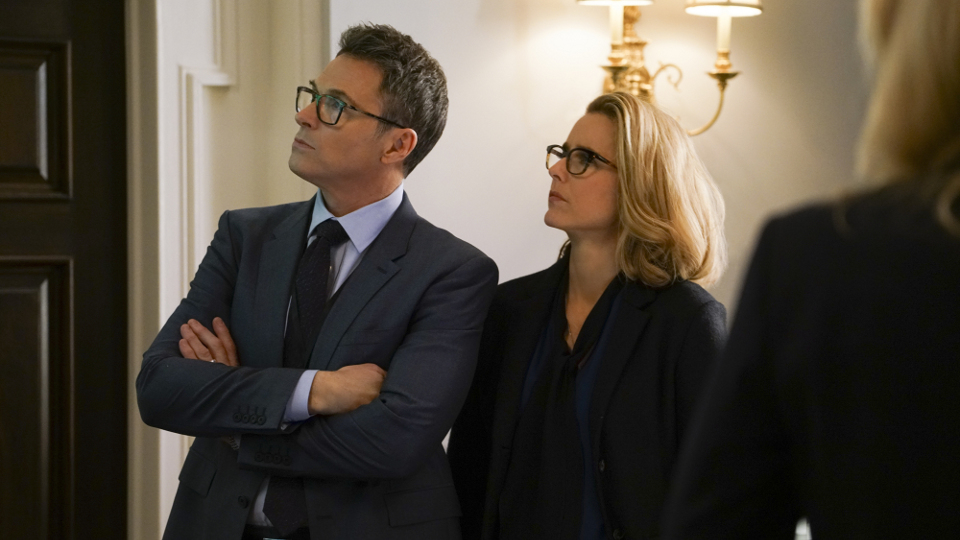 A worried Elizabeth (Téa Leoni) wanted to get to Henry (Tim Daly) and the kids to make sure they were ok. However due to protocol she was rushed to the White House. She was able to make contact with the kids but no-one knew where Henry was. As she was unable to leave she sent Blake to get some answers.

Meanwhile Henry was being rushed to hospital. He had re-entered the scene of the explosion to help tend to the wounded and wound up with radiation poisioning. He seemed in a bad way and it wasn’t clear for a while if he would survive or not.

The government were able to pinpoint that the uranium used in the dirty bomb was the same that was stolen in Moldova last episode. They decided to target the terrorist group’s leader in response to the attack.

Footage was also uncovered of a Saudi Arabian diplomat who had smuggled the uranium into the country. The Saudi’s refused to give him up so the American’s prepared to raid their embassy. Before they did the diplomat jumped off the roof to his death.

Elizabeth reached out to her NATO allies and discovered that Italy had been holding back information. After some persuasion they gave her a location in Libya where the terrorist leader was believed to be hiding. She wanted to send in special forces to track him but the President and CIA favoured a more immediate response and destroyed the compound. However it turned out he wasn’t there.

Thankfully Henry was only exposed to a low dose of radiation and made it home in a matter of hours. His near-death experience gave him a new perspective on things and he immediately requested to rejoin the DIA. Elizabeth wasn’t happy about it due to the strain the secrets put on their relationship.

At the end of the episode Henry was told that his request was denied. He was upset with Elizabeth thinking she had blocked him. She said she hadn’t then President Dalton and Russell Jackson stopped by. The President explained he blocked him and that they were putting together a new team to track the terrorists. He wanted Henry to lead it and said there would be no secrets between the team and the State department. Henry accepted.

The next episode of season two is Hijriyyah. After an Italian warship answers a distress call from a ship carrying Libyan refugees, Elizabeth is given 20 minutes to decide whether to question one of the passengers who claims to know the whereabouts of Jibral Disah, the leader of Hizb al-Shahid and the man behind the attack on the U.S. Also, Stevie brings her boyfriend, Jareth (Chris O’Shea), home to meet her parents