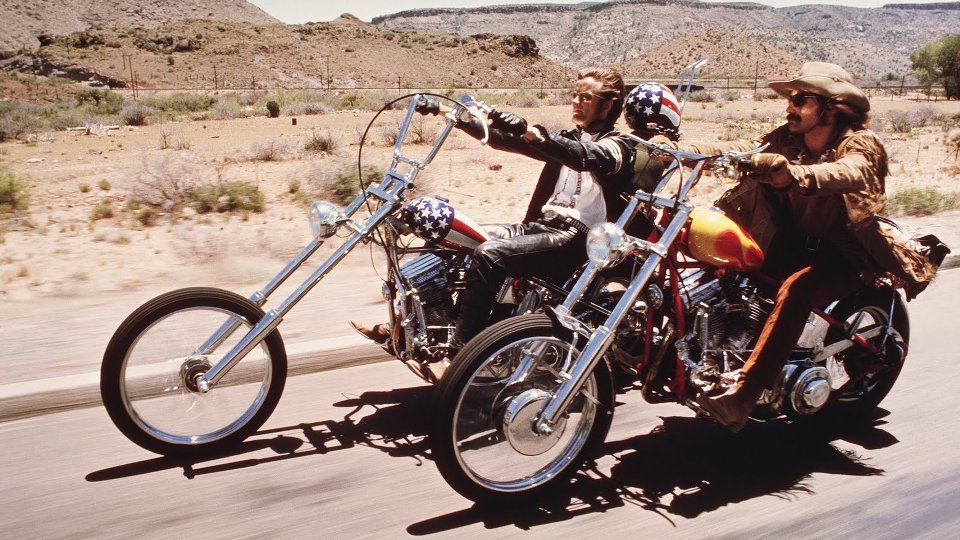 Released in 1969, Easy Rider was a seismic jolt to the Hollywood establishment. A freewheeling, plot-less, drug-fuelled, jump-cutting paean to freedom that culminates in a ten-minute psychedelic trip in a New Orleans cemetery. There is no backstory or character development. No inciting incident or conflict to be resolved. The rules of filmmaking do not apply here. This is the “New Hollywood”. There are no rules.

Borne out of the exploitation biker films of the 50s and 60s. Easy Rider, with its sexy swagger and rock n roll soundtrack took a sub-culture B-movie and rode headlong into the blockbuster mainstream. As the dream of the 60s died – with war raging in Vietnam, JFK and Martin Luther King being assassinated, peace and love being replaced with fear and paranoia – Easy Rider was the final fuck you to the old school studio system.

The creative forces behind the film are Dennis Hopper (actor, director, co-writer), Peter Fonda (actor, co-writer) and Terry Southern (co-writer). Hopper – all frayed nerves and coked up energy – plays Billy, whilst Fonda – cool, smooth and on an even keel – plays Captain America (no not that one). After getting rich on a dope deal – swiftly played out in a pre-credit sequence – these two misfits jump on their bikes and decide to go to Mardi Gras. That is the entire plot of the film.

Along the way they encounter hippies, hookers, violent rednecks and an alcoholic lawyer called George Hanson (Jack Nicholson). Most of the lines in the film are improvised and pretty far out man, but the themes of freedom and fear are eloquently delivered both visually and through the dialogue.

László Kovács incredible, natural cinematography has never looked better than on this Blu-ray transfer. His breathtaking images of the American wilderness, matched with the amazing soundtrack, are the very definition of the freedom that Billy and Captain America represent. In perhaps the film’s most famous scene, George tells them both that representing freedom is why the establishment is scared of them. And people who are scared, are dangerous. Those familiar with the film will know that this point is bluntly hammered home in the final scenes.

The cultural and film industry-wide impact of Easy Rider is undoubtedly more significant than its impact as a lasting cinematic work of art. Yes there are great moments littered throughout, but it is ultimately a film of its time, and as such has not aged particularly well. The LSD trip in the New Orleans cemetery – filmed on grainy 16mm long before principle photography had even begun – is one such sequence that belongs in the 60s.

But irrespective of a few dated scenes, that iconic moment when the credits roll – Born to be Wild kicks in and we see Fonda on his chopper looking like the coolest cat that ever lived – still gives me chills.

Being a Criterion release we are treated to a great selection of supplementary features on the disc. There are two commentaries, one from 2009 with Dennis Hopper, and one from 1995 featuring both Hopper and Fonda. There is also the 1995 documentary “Born to be Wild” that was made for the BBC. We also have Shaking the Cage, an hour long documentary about the production and cultural impact of Easy Rider. There is also footage from a 1969 edition of Pour Le Cinema showing Hopper and Fonda at the Cannes Film Festival. Finally, there is an interview with producer Steve Blauner, an essay by film critic Matt Zoller Seitz and the two original trailers.

In this article:Dennis Hopper, Easy Rider