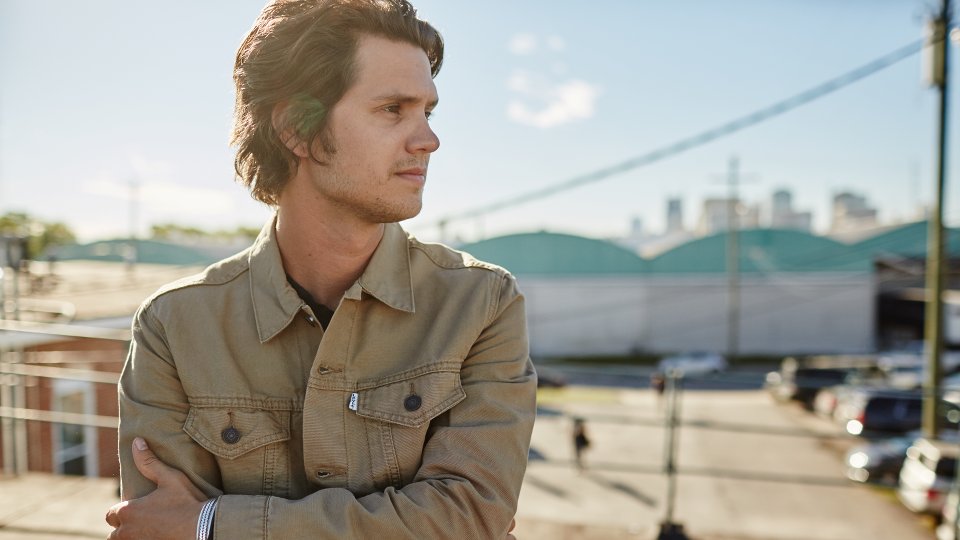 Singer-songwriter Steve Moakler moved to Nashville in 2006 to pursue his music career.

After finding success as a songwriter, co-writing Dierks Bentley’s hit Riser, Steve has turned his attention to his own music with the release of a self-titled EP. The first single, Suitcase, is picking up serious steam at Country radio and Steve is quickly gaining popularity.

I had a chat with Steve to find out more about the EP, talk about his recent Opry debut, and to discuss his upcoming album.

Hi Steve. How are you today? Where does this Q&A find you?

Hey! I’m doin’ well, thank you. Currently just outside of Little Rock, AR but en route to Texas to kick off the Suitcase Tour.

Your single Suitcase is starting to make waves on Country radio. What’s the story behind you recording that track and why did you choose it as a single?

Suitcase is the first song I’ve ever recorded that I didn’t write. A few months after my wife Gracie and I got married we went on a cross-country trip in a ‘72 Winnebago. While we were traveling we had a demo recording of the song, which was written by Luke Laird, Barry Dean, and Thomas Rhett and we couldn’t stop listening to it. It kinda became the official soundtrack of the trip and it resonated so deeply with both of us. It seemed to perfectly sum up how life felt at the time and it still does.

Suitcase is the first single from your self-titled EP. What was your aim when you recorded this EP and what do you want your fans to take away from it?

We wanted the EP to be an appetizer for the album…The record will feature some songs that go a little bit deeper lyrically, but I think the EP is a great preview of what’s to come. I also wanted it to be heavy with fun live songs and I think we accomplished that. Tonight is the first night of the tour, so we’ll see!

In your career to date you’ve written songs for artists such as Jake Owen and Dierks Bentley. Which has been your favourite song to write and why?

Riser is probably my favorite song that I’ve been apart of. I wrote it with Travis Meadows who is an amazing writer. For both of us, it’s been so fulfilling to know we wrote a song that encourages people and can help them fight whatever battles they are in the middle of. It’s so cool that music can do that. On top of that, the powerful way that Dierks has embraced the song has been an inspiring thing to watch. He’s awesome!

Are there any songs you’ve given away to other artists that you wish you’d recorded yourself?

Riser would be one, but I actually recorded it on my last album ‘Wide Open’ too! So I don’t have to live with that regret… it’s always an honor when someone else wants to sing your song and I believe they end up where there supposed to be.

You recently made your debut at the Opry. How did it feel to be playing such an esteemed and iconic venue? Were you nervous?

Playing the Opry was incredible… I was so nervous for the weeks leading up to it. I hadn’t felt that way since I proposed to Gracie! I knew it would be magical, but I honestly was caught off guard by how emotional I felt when I stepped into the circle during the intro of my first song. It took me a second to get myself together. I’m really happy with how it all went and I hope I can play it again sometime.

You’re currently on the Suitcase tour. What can your fans expect from the tour?

I think it’s gonna be out best show yet… definitely the most high energy. The set is focused around the new music, but it’s rounded out with a handful of songs off my past few records as well. Some fun covers in there too that I will let be a surprise…can’t wait!

Country music is finally starting to get more support here in the UK. Do you have any plans to bring your music over to our shores?

No plans on the calendar at this moment, but I definitely have plans to get to the UK in my heart. Had quite a few friends that just came back from the big country festival there and they said that the UK has the best country fans in the world. That’s something I can’t wait to experience first hand!

Which artists have been your biggest inspirations over your career so far and what impact have they had on you?

Bruce Springsteen has had a huge impact on me. My dad always listened to him when I was a kid so I grew up listening to his old records, but I discovered his new records on my own a few years back and I just love them. When I think about putting together a record or a live show, I think about him. He makes me want to write songs that will stand the test of time and put on shows that break down walls and fill people with hope, that’s what he does.

What else do you have coming up this year? Are you working on an album?

Yes! Working on finishing the album. Really excited about the last batch of songs that we have to record. It’s important to me to make a full album that is well rounded, something that you want to listen to top to bottom. I feel really confident that we’re gonna do that. Can’t wait for you to hear it! Other than that, I’m sure I’ll have some more tour dates to announce soon, but for now I’m just focused on the Suitcase Tour.

Steve’s self-titled EP is available now. Listen to the title track below:

Advertisement. Scroll to continue reading.
In this article:Steve Moakler