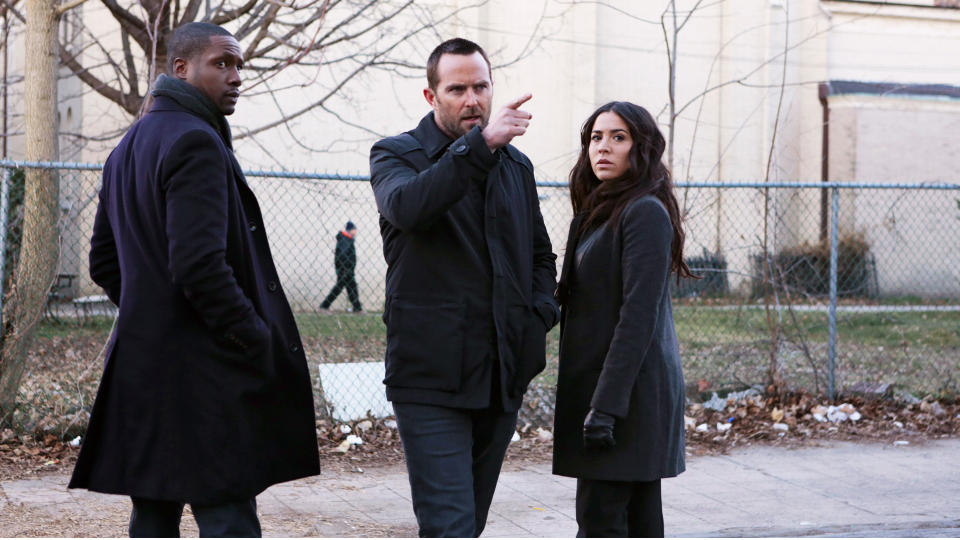 On the latest episode of Blindspot, a tip suggested that their was a mole inside the FBI.

This prompted the return of the creepy Inspector Fischer (John Hodgman). He put the FBI office on lockdown while he and his team set about Mayfair and her team in search of the mole and information on the disappearance of Tom Carter. During his investigation he had the entire team take polygraph tests. The results led him to believe Mayfair (Marianne Jean-Baptiste), Tasha (Audrey Esparza) and Jane (Jaimie Alexander) weren’t telling the truth.

Mayfair was sure that Fischer was trying to pin it on her to take her job. However, his investigation eventually concluded that it was Jane who was the mole and took her into custody. Despite the lockdown Weller (Sullivan Stapleton) had been able to get an FBI informant into the building with the help of his ex-girlfriend, Allison Knight (Trieste Kelly Dunn). They hoped the informant would identify the real mole but he also said it was Jane.

With the help of a little violence Weller eventually worked out that the informant wasn’t telling the truth. He confessed that the mole was actually Fischer who he described as a dangerous man.

Weller went to try and free Jane and arrest Fischer. During the attempt Jane was able to break free of custody and ended up shooting Fischer dead in self defense.

Elsewhere in the episode Reade (Rob Brown) confessed to Weller that he was seeing his sister Sarah. Weller wasn’t happy, especially when Reade said that the relationship was serious. He told Reade that he must end it and also lost it with his sister when he returned home.

At the end of the episode Jane returned to the rooftop to meet with Oscar (François Arnaud) once more. She received little in the way of answers from him and told him that she was done. Before she left he tried to tell her about a time-sensitive tattoo that she needed to investigate.

The next episode of the season is Rules in Defiance. Zapata goes undercover when an anonymous tip leads the team to an urgent death row case. Meanwhile, Jane questions her role in the FBI.