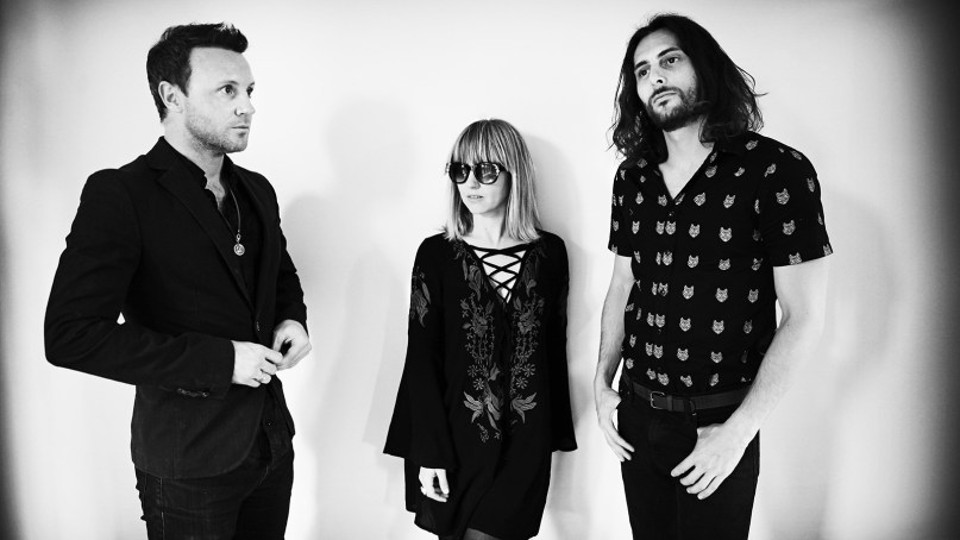 Self-produced and recorded in The Joy Formidable’s studio aka The Red Brick in North Wales, Hitch is an album that has musically and emotionally put the band through the wringer, but as the band explains, ‘it’s fine for it to hurt, to finish a record feeling exhausted, we needed a good purge’.

The Joy Formidable have been around for almost a decade now since forming back in 2007 in North Wales.

I had a listen and here are my thoughts.

The album starts with a brooding track, A Second in White. Although the verse is edgy and big, the chorus isn’t. Instead, the chorus to A Second In White is mellow and sweet, which works.

Up next is Radio of Lips, which will sound very familiar to anyone who knows The Joy Formidable’s music catalogue. The track is good and has its moments but is not adventurous. The Last Thing on my Mind sounds quite generic to begin with but redeems itself during the bridge, when the song becomes quite interesting with its distorted sound and catchy rhythm.

Changing the mood of the album and mellowing things down is Liana. The track is sweet and offers a good change to the dynamic of the record. The tone of the track changes during its bridge as the sound becomes bigger and better. Also quite interesting is track five, The Brook. I quite enjoyed the Celtic influences on this track, which seemed like a nudge from The Joy Formidable to their Welsh roots. The track is interesting but I am not sure I was convinced by the fusion of Celtic sounds and The Joy Formidable’s own brand of alternative rock.

It’s Started lures you back to a bigger sound from the band. I can see this track becoming a live favourite with its big guitar riffs and leading drums. On CD it sounds almost constricted and unable to expand the way the track should.

Surprises on the album include the very quiet song, The Gift. The track is both fragile and pure to begin with. The peace is only made slightly edgier by some distorted guitar riffs, which add a certain nostalgia to the song.

Next up is Running Hands With The Night and this is the sound you’d expect from The Joy Formidable. This brooding, sensual and sexy track really works for me and reminds me of why I like this band. It might not be that adventures but the song’s psycadelic sound adds a certain danger to the sound of the track, which works. A personal favourite on the album for me has to be the extremely catchy and infectious Fog (Black Windows). The track is simply stunning and has some of the most infectious guitar riffs and melodies.

Underneath the Petal is an acoustic track with Celtic undertones and is rather pretty but doesn’t seem to quite fit within the context of this album. Nevertheless, it’s a sweet song with incredible guitar picking.

The penultimate track on the album, Blowing Fire is another treat from The Joy Formidable. The song balances mellow verses with big choruses well and it works. The last track on the album Don’t Let me Know is a heart-breaking ballad with beautiful lyrics. The album doesn’t stop being surprising and just like the calm before the storm the dreamy Don’t Let Me Know erupts in the most spectacular way with a symphony of sound and will leave you wanting for more.

Favourites on the album to me were A Second in White, The Gift, Fog (Black Windows), Blowing Fire and Don’t Let me Know.

Hitch is an interesting album and has some good moments. Some of the song choices appear surprising and sometimes a bit generic, which in some ways is disappointing. The more adventurous tracks on the album fell a bit flat and didn’t seem to mix well with the other songs on the record. That being said the tracks that did work were excellent and make the record interesting, and worth buying/listening to.


Advertisement. Scroll to continue reading.
In this article:Hitch, The Joy Formidable