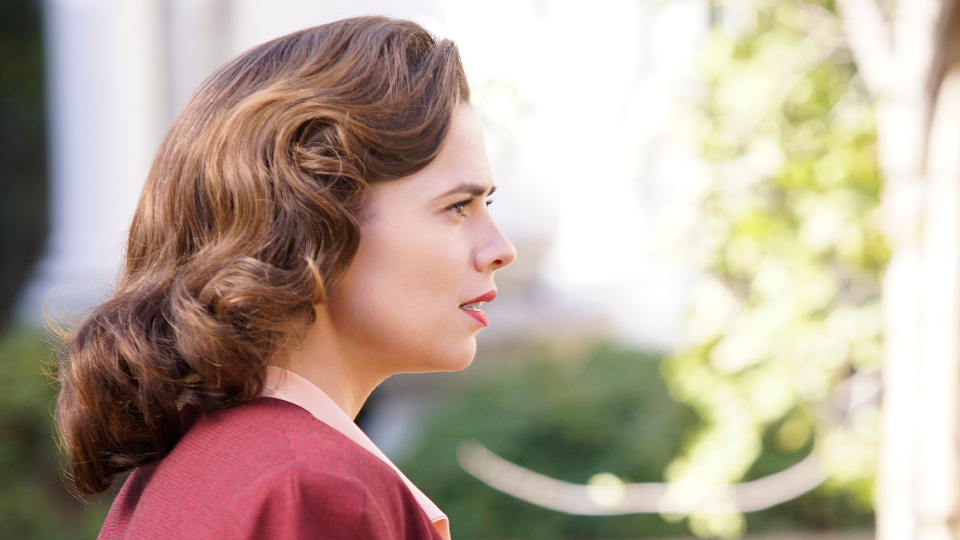 The latest episode of Agent Carter opened up with a fabulous dream sequence. It started off in black and white before turning into a colourful musical. Peggy and Wilkes danced, Sousa sang, Angie from season one turned up and Dottie and Jarvis both made an appearance too.

It was all a bit bizarre until Jarvis told Peggy to wake up and she found herself confused and tied up in the back of a truck next to Jarvis. The quickly freed themselves of their bonds and Peggy used a special hot-wire tool, presumably given to her by Stark, to cut through the chains on the door.

After escaping they had a massive row with Peggy saying some rather hurtful things to Jarvis. He broke the news about Ana not being able to have children due to her injuries and Peggy felt bad. After taking the truck back Peggy told Jarvis to go and be with Ana. After visiting her she told him to go and help Peggy.

Thompson, Sousa and Samberly were stranded in the desert until some goons sent by Masters turn up to kill them. Thompson was able to talk them into taking them back to Masters.

Back at the SSR Thompson convinced Masters into keeping Sousa and Samberly alive. He then hatched a plan for them all to take down Frost.

Meanwhile Frost was setting up a new lab in order to extract the Zero Matter from Wilkes. She wanted it all for herself but Wilkes managed to resist her methods of extraction.

While Samberly fixed up the gamma cannon to use on Frost, Thompson went to meet her. He told her that Masters wanted to use the cannon on her and that he would deliver her Masters and the cannon in exchange for a seat on her council.

What no one else knew is that Thompson had asked Samberly to turn the cannon into a bomb. Thompson hoped to remotely detonate it to take out Frost.

When Masters set off to deliver the cannon with Thompson, Peggy and Sousa find their car has been crippled. They then learn of Thompson’s plan and Peggy gets Samberly to build a jammer.

They then went to block Thompson’s detonation of the bomb while Peggy went in search of Wilkes. She found him and tried to rescue him but he wanted to be left as he was worried about how dangerous he had become. Instead of leaving with Peggy he locked himself inside.

When Thompson was unable to detonate the bomb he forced Samberly, at gunpoint, to turn off the jammer. Peggy tried to stop him but it was too late.

At the end of the episode Frost was absorbing Masters using her Zero Matter. She noticed him smiling as the cannon came back online. Before they had chance to do anything else, Wilkes stumbled in and unleashed his own Zero Matter.

The finale of season two is Hollywood Ending. Peggy needs Howard Stark to eliminate Zero Matter as they are faced with a mission none of them could come back from.

Tune in to FOX UK at 9pm on Thursday to see the season finale. Preview it with our gallery below: