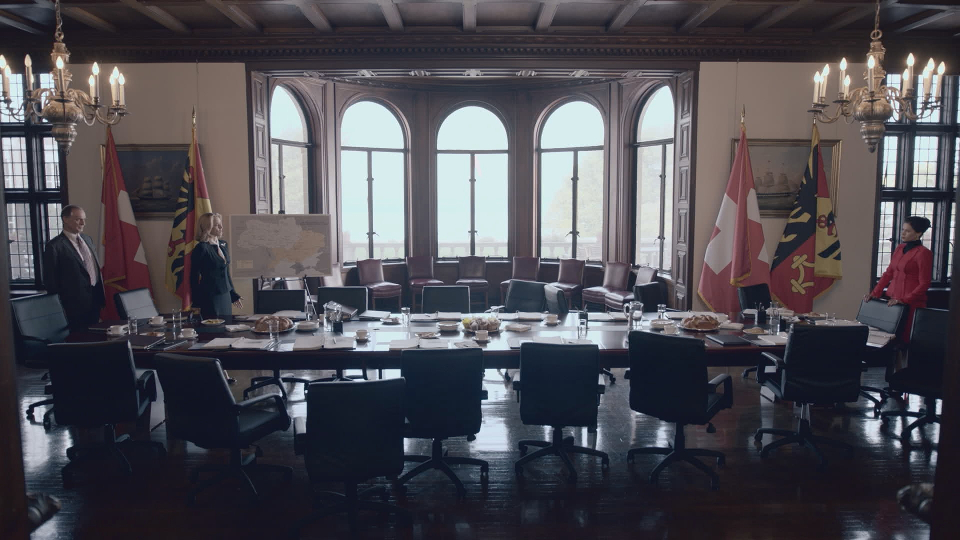 In the latest episode of Madam Secretary, Elizabeth (Téa Leoni) was faced with the aftermath of President Dalton deciding to unleash a cyber attack on Moscow to turn off their power. Dalton went for the attack after being presented with evidence that pinned the Air Force One attack on Russia.

Maria Ostrov was furious at the Americans for daring to attack Russia and in a Skype chat with Dalton she denied they were behind the Air Force One attack. Dalton pretended he knew nothing of the cyber attack in the hope it would teach the Russians a lesson of not to mess with America.

Dalton and his team were sure Ostrov wouldn’t dare do anything further but Elizabeth was concerned they were wrong. It turned out she was right to be concerned as Ostrov decided to turn off three pipelines that supplied 40% of the Western Europe’s gas.

Dalton wanted to retaliate hard but Elizabeth suggested going through the U.N. first. He agreed to give her 24hrs and she needed to come up with the speech of her life to gain the support of the rest of the world. Dalton also had a press conference with the Ukrainian President to announce America’s full support for them including a new no-fly zone.

Meanwhile Henry (Tim Daly) realised what was going on and spoke to Jane, his DIA contact. He noticed that the exhaustive intel that Dmitri had provided them didn’t have any mention of the Air Force One attack and concluded that it might not have been the Russians. He approached Russell Jackson about his concerns but he refused to listen saying it was too late. He also warned him off going home to Elizabeth with the information.

Henry decided that it was worth risking going to his wife as if he was right it could prevent a World War. His point that made her listen was that if Russia were capable of pulling off the biggest hack in history why would they retaliate by simply turning off some gas pipes.

Elizabeth and her team fully explore the evidence again and speak to the Chinese to check it wasn’t them instead of Russia. She even went to visit Craig Sterling to get his opinion on how the Ukrainan’s looked after their plane crash.

In the end she concluded that it really might not be Russia and felt the evidence pointed to the Ukraine. They confronted the Ukrainian President and he confirmed their suspicions that they were behind everything with the aim of getting America’s support against Russia.

At the end of the episode Russia violated the no-fly zone and Dalton gave permission to engage the Russian jet. It looks like war might still be on the cards unless Henry has more tricks up his sleeve.

The next episode of season two is The Greater Good. After uncovering a secret that could ruin Maria Ostrov’s (Angela Gots) reputation, Elizabeth and President Dalton head to Vienna to meet with her in an attempt to find a peaceful solution to the escalated conflict with Russia. Also, Dmitri requests to be released from his duties as a spy, and the McCord’s get ready to trim their Christmas tree.