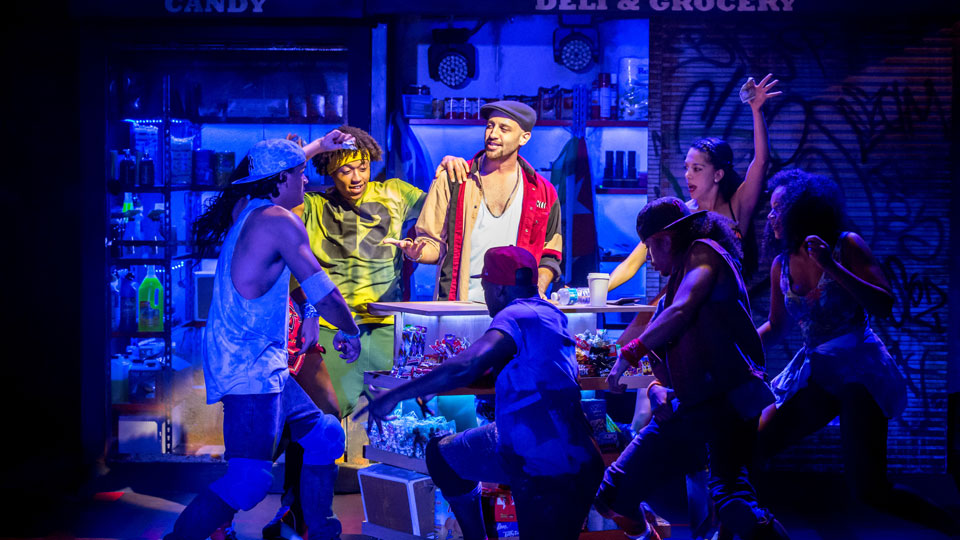 We first saw US musical In The Heights on its debut at London Southwark Playhouse. The run was a resounding success and was swiftly followed by a four-week transfer to the unique Kings Cross Theatre. In The Heights’ tenure has been extended and is now booking well into the autumn, giving theatre-goers an extended chance to visit.

Lin-Manuel Miranda, responsible for the Tony award-winning music, lyrics and book, is certainly a name to watch out for. The auteur is generating plenty of heat on Broadway with his critically-acclaimed, Grammy-winning follow-up Hamilton, which may make a splash on these shores in the not too distant future. Miranda represents a very new breed of musical theatre, which is attracting a young, diverse audience – something which the West End is crying out for.

But back to the show.

Set in Washington Heights, New York, In The Heights is a very different style of musical from your Sondheims and Lloyd Webbers. Set to a Latin-infused soundtrack and spiked with hip hop and R&B influences, the musical tells familiar tales with a fresh perspective.

The storyline is cliché-ridden, to say the least. Home is where the heart is – check; Follow your dreams – check; West Side Story-style romances – double check. There really is nothing new in terms of plotting but the age-old narrative is thankfully presented in a fresh and vibrant way.

The characters are all immensely likeable, from the lovable Usnavi to the hilarious Salon-owner Daniela, all of the leads have endearing, if somewhat predictable, charms. Full respect goes to the hard-working cast from the multi-talented Sam Mackay, who raps, sings and dances his way through proceedings, to understudy Jocasta Almgill, who gave the vocal performance of the night.

Kings Cross Theatre is a fantastically unique space, with audiences sitting on either side of the rectangular, floor-level stage meaning viewing perspectives constantly change. This gives the production an infectious energy and really adds to the show.

In The Heights feels both old-school and modern and offers a really distinct flavour to the current crop of West End musicals. Playing in rep with The Railway Children at the Kings Cross Theatre, could we be in for another extension? This reviewer certainly hopes so.