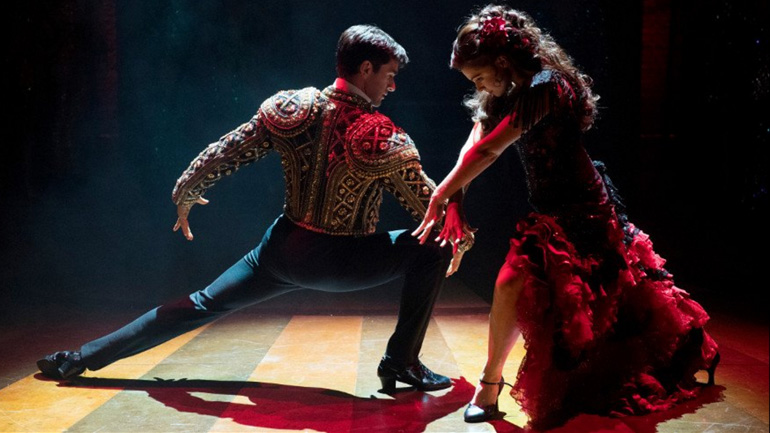 Strictly Ballroom The Musical stomps into West Yorkshire Playhouse this month as the theatre’s highly-anticipated main attraction of the season. An ambitious dance extravaganza based on the 1992 movie by Baz Luhrmann, it is co-produced by Global Creatures and makes its British premiere following engagements in Syndey and Melbourne.

The story is set in mid-Eighties’ Australia and follows Scott and Fran, two seemingly mismatched young dancers who compete in their own free style at the Pan-Pacific Grand Prix Dancing Championship. Suppressed by endless infighting and high-level corruption, the duo dance from the heart whilst attempting to ward off disqualification in a contest which reinforces itself as conventional and strictly ballroom.

The show is as eccentric as a John Waters production, offering camp pantomime characters and deliciously villainous grotesques, all operating within the outrageous microcosm of a dance competition. There are overtones of Hairspray and Saturday Night Fever, centring on a competition which looms large whilst nurturing the sweet romance between its conflicted leads. Whilst Strictly Ballroom may seem an unexpected choice for the Christmas season, all of the ingredients of a traditional fairytale can be found and enjoyed within this show’s contemporary setting.

The principal cast glows with Sam Lips as Scott in a charming and commanding performance, demonstrating outstanding vocal and dance ability. Gemma Sutton shines as Fran, carefully nurturing a transformative journey from dainty wallflower to sensuous starlet. Befitting a seasonal musical, Strictly Ballroom also offers a range of outrageously inflated and heightened characters, including a toupee-spinning Julius D’Silva as Barry Fife and Richard Grieve in an irresistibly preening turn as Les Kendall. Richard Dempsey is hilarious as glittering ringmaster JJ Silvers –  a delightfully charming and immersive anchor to the show. In a scene-stealing performance, Fernando Mira delivers an intense and authentic flash of danger as Rico, master of the pasodoble. Two very endearing and cheeky performances are also provided by junior dancers Troy Tipple and Mia Speight.

Ben Atkinson’s musical arrangement is pounding and palpable with a walloping percussive feel, ensuring every number hits its mark. Standouts in the score include Time After Time and Perhaps Perhaps Perhaps, whilst a stomping arrangement of Love is in the Air is sure to have audiences dancing in the aisles. A superlative arrangement of Magnifico is a particular highlight, partnered with Fernando Mira’s showstopping pasodoble.

Drew McOnie’s imaginative direction ensures that dramatic scenes move quickly with purpose and plenty of detailed stage business. Within almost photorealistic settings, the drama adopts a filmic quality and is clearly influenced by the texture of the movie. The production takes full flight with its grand choreography; ballroom numbers fill the stage with shimmering form and glistening Technicolour, thanks to beautiful costume designs from Catherine Martin. The cavernous auditorium of the Quarry Theatre with thrust stage also ensures that every detail in the dance can be enjoyed from the audience’s slightly elevated perspective. A show steeped in high production values also presents a set by Soutra Gilmour which collapses, expands, encircles and encloses with a beguiling complexity, which provides an endless patina of interest on stage.

Skillfully produced and endlessly ambitious, Strictly Ballroom is a glitzy and glamorous production. It tells a simple story with vigour and heart, bound together with outstanding stagecraft, arresting choreography and a commanding score. An alternative Christmas engagement with a wholly different flavour to competing musicals, Strictly Ballroom The Musical delivers a passionate flourish of flair and fancy to this festive season.