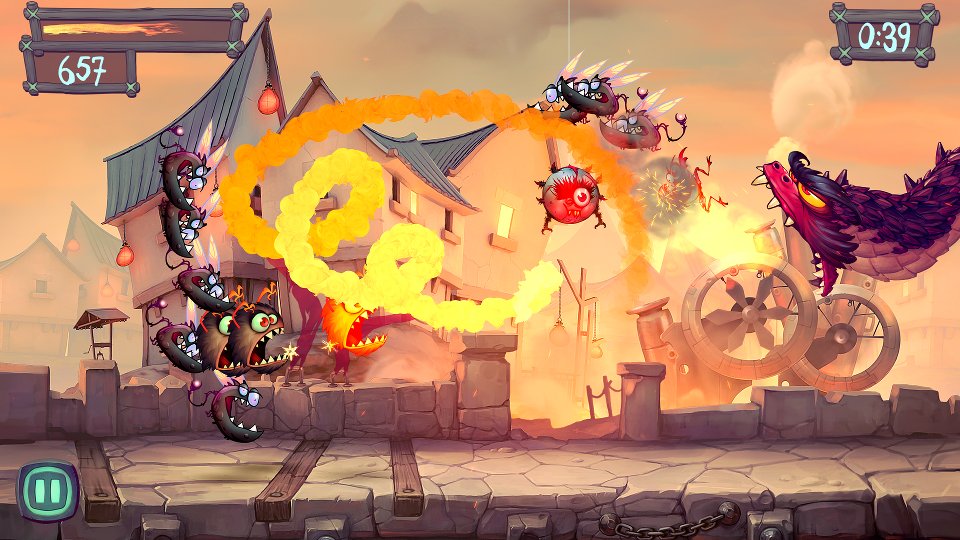 RetroFist’s Fire Fu is their debut mobile title for iPhone, iPad and iPod Touch. Published by All 4 Games, Fire Fu aims to be an intense arcade game along the lines of Fruit Ninja but a lot more hectic. Essentially you use your finger to swipe across the screen and burn pretty much anything that appears. As all kinds of ghoulish creatures travel across the screen, your mission is to burn as many of them as you can to earn points.

When you play the game for the first time you’re taken through a tutorial that gives you a basic overview of the game and what you’re expected to do. When you place your finger on the screen fire appears but if you swipe around for too long your fire runs out. Simply releasing your finger from the screen will allow your fire to recharge so you can continue blasting through critters. It doesn’t take too long to recharge so if you keep lifting your finger off the screen for a few seconds at regular intervals you’ll never be without fire.

You’d be forgiven for thinking that this must be a pretty easy game. There’s not a great deal more to the gameplay than I’ve outlined but it’s actually surprisingly hard. You have to amass a certain amount of points to unlock potions that you can use in the game to aid your massacre and to unlock bosses that will really test your skills. You soon realise that hitting those point totals is actually fairly difficult and it will take the average player at least several attempts to break the first points threshold.

While you’re swiping away burning anything that moves, you need to be careful not to hit any of the bombs that are flying around. If you do touch them, they explode and take a chunk of your points with them. They can be difficult to spot as the game gets pretty hectic fairly quickly so you need to keep your wits about you. It can also mean the difference between hitting your score or arriving just under it.

Visually Fire Fu is attractive. The hand-painted environments are sufficiently detailed and the critters that fly across the screen look great. In the midst of the chaos sheep run along the bottom of the screen along with a variety of blob-like critters. The fire that comes from your finger pressure also looks great and I would definitely say that the visuals are one of the strongest aspects of the game.

Where Fire Fu falls down is the lack of variety. Yes there are several different backdrops to the game but after several runs through it starts to feel very samey. There isn’t much in the way of a progression in the game and the repeat play value is fairly low.

Fire Fu is by no means a bad game but it does suffer from not offering anything all that original. If you’re won over by visuals then you should play Fire Fu just to see the fantastic graphics but if you want a game that you’ll keep coming back to time and time again, I suspect this won’t satisfy. Fire Fu is the kind of game that you can while away about 5 or 10 minutes on but you’d do well to stick with it much longer than that.