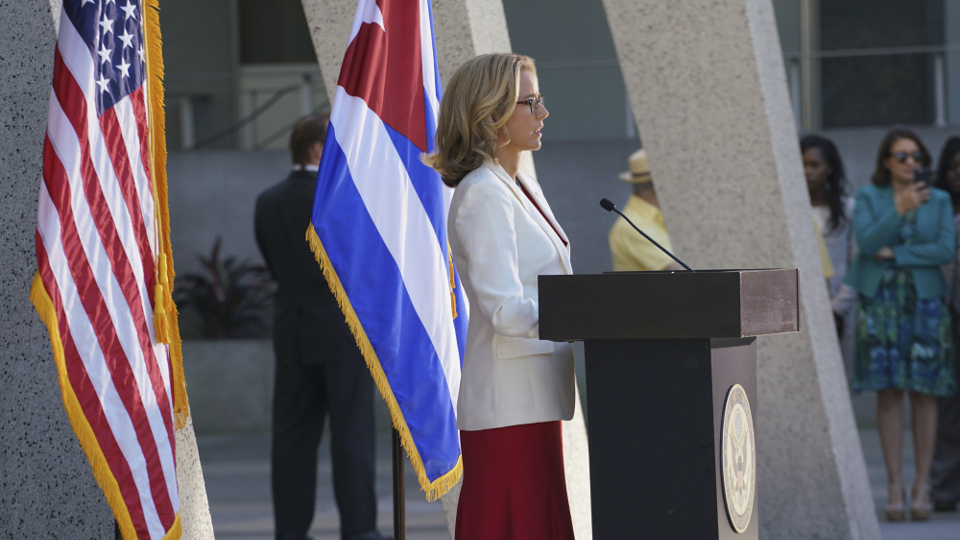 In the latest episode of Madam Secretary, Elizabeth (Téa Leoni) was approached by Anton Gorev, her friend and the former Russian Foreign Minister. Since fleeing to London he had his money frozen by the UK. He wanted Elizabeth to broker a deal so that he could get access to his money to enable him to run against Maria Ostrov.

Elizabeth worked out ways to achieve this with the British but Sterling convinced the President to block the money. They wanted to try and gain intelligence from Gorev in exchange for the money. Eventually they were able to use him to obtain the identity of the hacker behind the Air Force One breach.

$80 million was transferred to Gorev in exchange for some of his exclusive London properties. Shortly after the transfer one of his men turned on him and shot him dead. The killer also escaped with the money.

The Ukrainian President, Bozak, turned up unannounced to appeal to Elizabeth for immediate NATO membership. She had little to offer him as its a long and complex process but agreed to talk with the President.

Elsewhere in the episode Henry (Tim Daly) continued his mission as Dmitri’s handler. He had him attend an event where he was to obtain an insight into Maria Ostrov’s plans. There Dmitri overheard a plan to snatch Gorev’s daughter, Olga, and he was also told of a plan to invade the Ukraine.

Henry took matters into his own hands and was able to get to Gorev’s daughter. He brought her back to the family home to keep her safe. After learning of her fathers death she decided to return to Russia to bury his body.

At the end of the episode Bozak’s plane went down and crashed. It quickly became apparent that it had been hacked just like Air Force One in an attempt to kill Bozak. Fortunately all those aboard were able to parachute to safety before it crashed.

The sixth episode of season two is Catch and Release. After an American aid worker is killed in Syria by the first known American ISIS leader, Elizabeth recalls all aid workers stationed there, including her brother, Will, and makes it her mission to get justice for the victim. Also, Henry is conflicted when Dmitri asks for help saving Ivan, who has been called back to Moscow