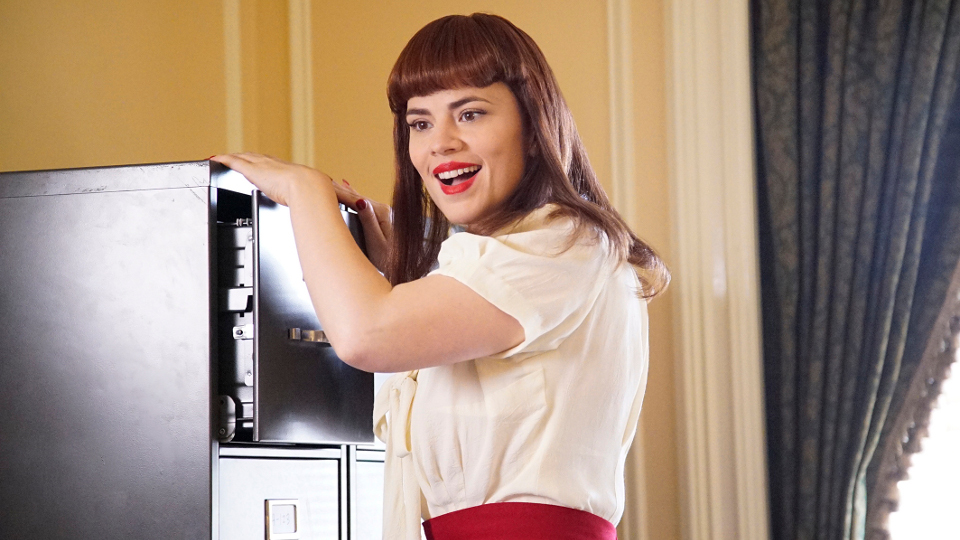 In the latest episode of Agent Carter flashbacks were used to help explain some of the backstory of the characters.

In the 1920’s Whitney Frost was shown to have a brilliant mind even when she was a child. She was shown fixing her mothers radio all by herself as well as doodling complex designs for machines and experiments. We also got to see a teenage Frost arrive in Hollywood where she was first approached by a talent scout.

Back in the present day (1940’s) Frost was seen practising her scary Zero Matter absorption powers on a cage full of rats. Each time she used her powers the fissure on the side of her head continued to grow.

Carter (Hayley Atwell) was also given flashbacks to the 1930’s when she worked as a codebreaker at Bletchley Park and was engaged to be married. The death of her brother caused her to leave her fiancé to pursue a career with the Special Operations Executive.

Again in the present day Carter joined forced with Jarvis to kidnap Hunt – the guy who attacked her last episode. They interrogated him and managed to trick him into revealing details of the Council and Arena Club. Carter and Sousa prepared to raid the Arena Club but were stopped by Masters.

Instead they bugged Hunt and let him think he had escaped. He went straight to Chadwick in an attempt to blackmail him. To put a stop to him Frost revealed her powers to Chadwick and absorbed Hunt while Carter listened in secretly.

The fifth episode of season two is The Atomic Job. As Jarvis’ precision and quick-thinking skills are put to the ultimate test, Peggy must find a way to stop an atomic explosion that threatens to destroy all of California