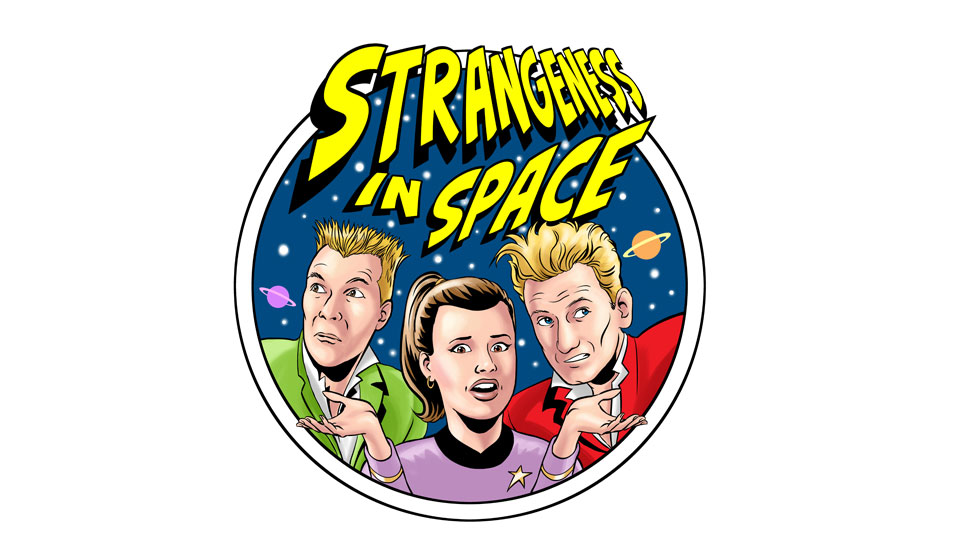 If you’re not yet a Mirthling who’s discovered the series Strangeness in Space, then now’s a good time to check it out! Episode Three is in the can, and Episode Four is currently in production. The series is entirely crowd-funded, and there are perks on offer for support!

The third episode – Step Back In Time – goes back to the genesis of the concept – exactly how did Trev and Simon end up on a malfunctioning spaceship orbiting the planet Mirth with Sophie Aldred? Well, as you might expect from the delightfully daft series, the truth involved a NASA Space Centre in Thurrock (near the shopping centre) and Alexei Sayle!

As usual, the all-star cast are on great form, and make Step Back In Time a very entertaining listen. Sophie Aldred is perfectly cast as the foil, and perhaps even ‘straight man’ to the family-friendly bantering comedy that Trev and Simon have perfected over the years. Aldred combines the Doctor Who companion and children’s TV presenter aspects of her earlier career, and enlivens some scientific terminology with her distinctive tones.

The episode follows the tradition of the previous one (which had seen Peter Guinness and Rufus Hound join the cast) and introduces a celebrity guest cameo spot – this time in the form of the king of alternative comedy Alexei Sayle, who plays Keith Keys – the unpredictable janitor of the NASA space centre tourist attraction. Doon Mackichan continues to delight as the sparkly and prim narrator Bounty Flightingale.

Running to twenty-five minutes, each episode is a fast, energetic and self-contained adventure in space. Earlier problems with pace have been ironed out, and the series has now really hit its stride.

The series is suitable for a family audience and will appeal to those with big imaginations – whatever age they are. See Strangeness in Space for more details, or to see how you can get involved in helping to fund the next exciting instalment!

In this article:Alexei Sayle, Doctor Who, Sophie Aldred, Strangeness in Space, Trev and Simon