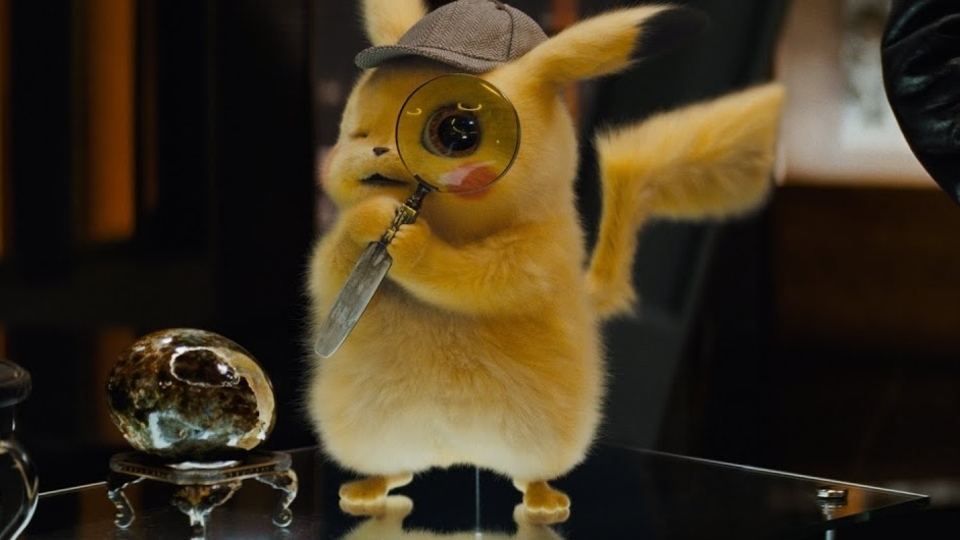 Pokémon: Detective Pikachu finally arrives in cinemas and delivers a fun ride that is highlighted by a scene-stealing turn by Ryan Reynolds as the cuter than cute Pikachu. It’s safe to say Pokémon fans will get the most from watching this movie, but there’s no doubt Detective Pikachu is one of the better game-to-screen adaptations to come our way. It looks gorgeous, there’s plenty of comedy that plays well to the young and the young at heart, and it has an ensemble that collectively pulls together to make a family adventure that holds lots of entertaining moments.

We join 21-year-old Tim Goodman (Justice Smith) who comes to the sprawling metropolis of Rhyme City to investigate the mysterious disappearance of his Father after a road accident. He comes across a talking Pikachu (Ryan Reynolds), whom he can understand perfectly. This is a rare thing, so Detective Pikachu and Tim reluctantly team up, and along with rookie reporter Lucy Stevens (Kathryn Newton) and her Psyduck, band together to help each other out. In the process they uncover a nefarious conspiracy that could threaten the entire Pokémon world.

Justice Smith, Kathryn Newton, Suki Waterhouse, Omar Chaparro, Chris Geere, Ken Watanabe and Bill Nighy make up the live-action cast and mostly all do a great job. Justice Smith is clearly a talent on the rise and has bags of charisma which helps sell the premise and makes us champion his quest for his father. It’s nice to see Kathryn Newton finally get a big leading role and hopefully this sparks more of the same for the actress, who impresses as Lucy. Ken Watanabe was awesome and it’s such a shame he wasn’t used more. Chris Geere, who will be familiar to Modern Family fans as Alex’s professor boyfriend from last season, does a surprisingly good job and is frequently funny.

But this film belongs to one person – Ryan Reynolds. He may not have been the voice many were expecting to play Detective Pikachu (and they do address this in a very clever and inventive way in the film), but Reynolds is fantastic here. Bringing his usual brand of wit and quick-fire humour to the table, he gives Pikachu a great, three-dimensional persona that carries the weight of the film exceptionally well. Kudos also has to go the effects and design teams who have done a staggeringly great job in making Pikachu feel real. He’s so cute and fluffy that he’s just instantly funny in every scene. Add Reynolds to the equation and you have the main reason why this film will put a broad smile across your face.

The city that they have created is wonderful and that’s where a lot of the film’s magic lies. Ryme City is gorgeously rendered and is full of amazing sights and sounds to take in. The colours and the inventive coupling of the real world and the Pokémon world conjure up some truly great visuals. These scenes are actually too infrequent and I think Detective Pikachu would have benefitted from having more of its plot centred in and around Ryme City. You’ll want to revisit these scenes to pick out all of the gags and to spot your favourite Pokemon going about their business.

There are things that don’t work in the film – mainly that I was expecting to see a lot more Pokémon used in bigger roles. There are some great Easter eggs that you can catch in the background, but I would have liked more characters to have been front and centre. Rita Ora’s inclusion is pointless because she hardly does anything. It felt like her role was a token regional character that gets recast depending on where you see the movie in the world. That’s a worrying trend that I don’t like appearing in family films – usually its flavour-of-the-month reality stars that voice characters in one scene. I’d much rather have consistencies than fad-casting.