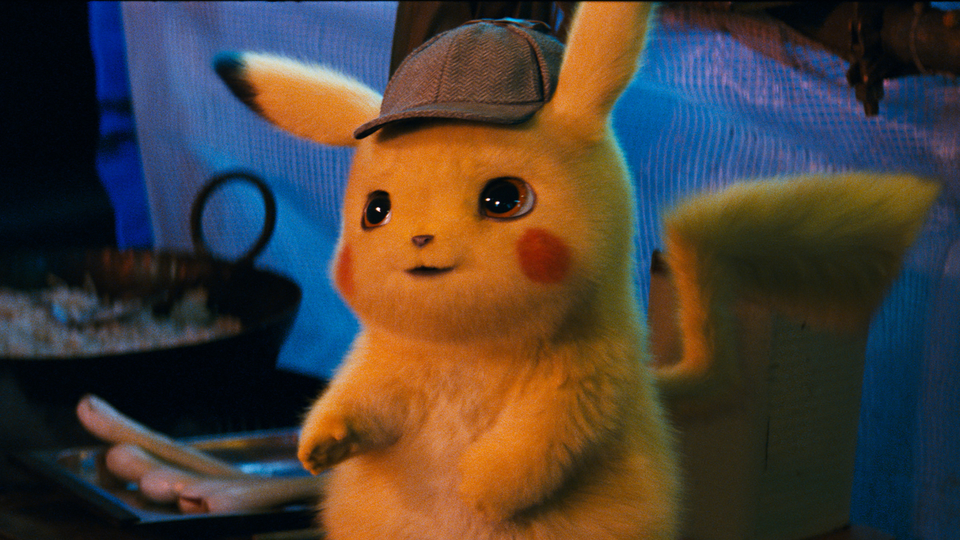 The first-ever live-action Pokémon adventure, Pokémon Detective Pikachu is in cinemas now. The film stars Ryan Reynolds as Detective Pikachu and is based on the beloved Pokémon brand — one of the world’s most popular, multi-generation entertainment properties and most successful media franchises of all time.

One of the most outstanding features of the film are its special effects, which are used so well to create some great movie-magic onscreen. We caught up with MPC Film’s VFX Supervisor Pete Dionne to discuss the making of Detective Pikachu and the challenges that presented themselves when trying to bring Pokémon into a live-action world.

The Moving Picture Company (MPC) have been involved in some of the biggest and best VFX films in recent years. Having picked up numerous awards along the way, the London-based visual effects and production company also have a presence around the world in Vancouver, Los Angeles, New York, Montreal, Amsterdam, Bengaluru, Paris, and Shanghai.

Known for their photo-realistic VFX and animation, MPC creates everything from lifelike fur, to dynamic crowd sequences, to larger-than-life destruction scenes and explosions. Pete Dionne has most recently worked on Passengers, Goosebumps, A Wrinkle in Time and The Amazing Spider-Man 2.

Check out our review of Pokémon Detective Pikachu

Fans everywhere can now experience Pikachu on the big screen as never before, as Detective Pikachu, a Pokémon like no other. The film also showcases a wide array of beloved Pokémon characters, each with its own unique abilities and personality.

The story begins when ace detective Harry Goodman goes mysteriously missing, prompting his 21-year-old son Tim (Justice Smith) to find out what happened. Aiding in the investigation is Harry’s former Pokémon partner, Detective Pikachu: a hilariously wise-cracking, adorable super-sleuth who is a puzzlement even to himself.

Finding that they are uniquely equipped to work together, as Tim is the only human who can talk with Pikachu, they join forces on a thrilling adventure to unravel the tangled mystery. Chasing clues together through the neon-lit streets of Ryme City — a sprawling, modern metropolis where humans and Pokémon live side by side in a hyper-realistic live-action world—they encounter a diverse cast of Pokémon characters and uncover a shocking plot that could destroy this peaceful co-existence and threaten the whole Pokémon universe.

Check out what VFX Supervisor Pete Dionne had to say about his experience working on Detective Pikachu, Passengers and what he thinks about the current climate of TV & Film.

First off, congratulations on Detective Pikachu Pete. Can you tell us how you got involved with the project?

I officially joined the team on Detective Pikachu a few months into pre-production, but this film was on my radar from the very beginning because of my past relationship with overall VFX supervisor Erik Nordby and VFX producer Greg Baxter. We all worked together on Director Rob Letterman’s previous CGI creature-heavy film, Goosebumps, so it was great to be able to build upon our shared experiences of the last show, to raise the bar even higher on this one.

How familiar were you with the world of Pokémon before working on the film?

To be honest, I wasn’t very familiar with the world of Pokémon when I first joined the show, but I knew this franchise had generations of passionate fans who deeply love these characters and the world they inhabit. Fortunately, my children are 8 and 10 years old, so I had them to educate me from the perspective of the younger fan base, as well as an entire VFX studio of young adults to also learn from. We really wanted to pay respect to the nostalgia and reverence of the franchise, so we all got up to speed fast.

What challenges did the film present initially?

From a visual effects perspective, our main challenge at the start of the project was to find the right balance between respecting these fantastic but cartoonish designs, while creating creatures which felt real and plausible. This was especially critical for Pikachu, due to the performance demands that were required from him. Early on in the process, we evaluated dozens of past films which had similar challenges as us, and though many of them stood on their own merits, there weren’t any which we could point to that managed to successfully retain the core source designs while also hitting the level of real-world believably that we were after. But we gleamed quite a bit from this process, probably more from the failures than the successes.

Ryme City is a beautifully rendered place with so much to see and do. Talk us through the design and initial implementation of bringing this world to life. London also seemed to be a big visual inspiration for it – was that a conscious decision at the start?

To design Ryme City, we referenced several cities to achieve Rob’s vision. We wanted to retain the look of London, which is where the majority of the location work was shot, but with a skyline as dense as Manhattan, a vibrancy in our street and large-scale building signage as you would find in Tokyo, and located at the foothills of a mountainous region, like Vancouver. Ryme City was a very significant build for us, as we required this fully CGI city for the third act battle scenes, for all of the establishing shots peppered throughout the film, as well as for all of the BG embellishments to the street-level location photography. Overall, we had several hundred shots with our digital city in it.

To create Ryme City in CG, we captured a tonne of data within a five block radius of the downtown London core where we were shooting using high resolution ground, drone, and helicopter photography, as well as ground and rooftop lidar scanning. As London doesn’t naturally have a dense skyline of tall towers, we designed and built over 100 skyscrapers to embellish the this downtown core with, following a layout logic similar to Manhattan. We then took large-scale lidar of Vancouver, including the surrounding mountains and ocean, and replaced Vancouver’s downtown area with our Ryme City environment.

We then designed and built hundreds of unique signs, of varying scales and purposes, and splattered them throughout the city, referencing different areas of Tokyo to inform our own distribution and density logic. We spent 8 intense months developing this city to completion before we could drop it into shots, but the team put an incredible about of thought and detailing into its design, and it turned out great!

Pikachu himself is one of the cutest creations we’ve ever seen – tell us about bringing him to life in a real world setting and the challenges that brought.

There is a lot of comedy and character in the juxtaposition between how adorable Pikachu looks and how crusty his personality is, and this relied on us realizing Pikachu to be as cute as possible. Fortunately, the 2D manga design of Pikachu is endlessly adorable, so we were starting from a pretty strong place. One of our stated goals was to not stray too far from this recognizable and highly revered design as we weaved complexity into this character, but through anatomical detailing as well as his motion design.

Our first step in designing Pikachu was to closely match the silhouette and proportions of the 2D character design for his outer form, while conforming an anatomically accurate quadruped skeletal system inside of this volume. We then layered in a plausible musculature system over top, and filled the remaining volume with fat for an appealing amount of jiggle and softness. The decision to put fur onto Pikachu was controversial for some, but Pikachu as a realistic hairless creature doesn’t look that appealing, so it was an easy choice for us to make. To prevent him from simply appearing as a furry stuffed animal, we tried to get as many natural animalistic details captured in his fur as possible. We used kitten and bunny fur as our primary references, paying very close attention to variance of details across the entire body, like density, length, stiffness, colour, and even how the different follicles transmit light.

For additional detailing, we looked for animalistic features that we could add without detracting from his adorableness. For example, we embraced things like cute fuzzy bunny paws and moist kitten noses, but avoided weird bits of anatomy inner ear cavity detailing and overly articulated teeth and gums. We designed his eyes as dark discs like in the anime, but added a dark brown iris, so that we could track his eyelines, as well as motivate an additional layer of caustic glinting into his eyes.

What was it like working with director Rob Letterman?

Working with Rob Letterman is always a pleasure. He is very experienced in both animation and visual effects, so to execute his vision he is able to operate and communicate at quite a high-level, which is great for us. I also really appreciate his instincts and qualities as a filmmaker, especially his ability to weave humour into his drama and dialogue, without sacrificing heart and sincerity. He has a very cinematic aesthetic as well, so the plates that he shoots with his cinematographer always look amazing.

I’m a big fan of Passengers, could you talk a little bit about your experience working on that project. It had a very distinct visual style which conjured up some of the best sci-fi visuals I’ve seen in cinema recently.

Passengers was a very exciting project to be a part of, especially to have the opportunity to contribute to the striking visuals which defined that film. Though both Detective Pikachu and Passengers relied heavily on world building to tell a story, it was a completely different experience for us working in visual effects. Where Detective Pikachu was so heavy on animation and character design, the most significant work of Passengers hinged on strong environmental production design for both the interior and exterior of the spaceship. They both had massive visual effects teams, and I’m very proud of the work they produced for both films.

Most television projects cannot afford the luxury of spending two years and a massive budget to focus on 95 minutes of context, so I think that high-end film visual effects will remain in a class of its own for the foreseeable future. However, I think it’s exciting to see what is happening in the midfield of the industry, where we are definitely seeing the lines beginning to blur in the level of quality between mid-sized film and television work. And this trend will only continue as the technology and process of digital production filmmaking continues to evolve.

I started my career in Vancouver 20 years ago, at a time when there were less than 100 local jobs in feature film visual effects, and I’ve since watched it grow into a local industry of thousands of positions across several world-class studios. The same thing is occurring in many other cities across the world, as the visual effects industry continues to grow and mature. Not long ago you had to relocate to either California or London to work on high-end projects, and now there are dozens of VFX hotbed cities globally which provide an entry point for young talent. So I think these entry-level opportunities are definitely more accessible than when I started out, which is fantastic.