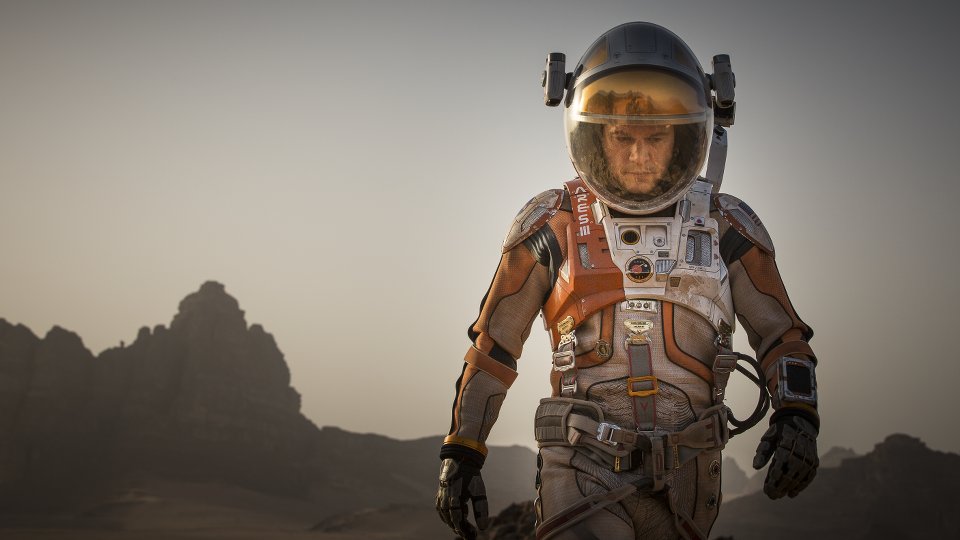 When a raging storm forces a manned-mission on Mars to abort, astronaut Mark Watney (Matt Damon) is feared dead. After his crew leave the planet it turns out that Watney did manage to survive. Now stranded on an uninhabitable planet with little to no resources at his disposal, Watney must practically think his way out of the situation. 140 million miles away on Earth, NASA is desperately trying to find a way to bring him back home but time is running out.

After a few duds, Ridley Scott triumphantly returns to form in this engaging, funny, edge-of-your-seat sci-fi actioner that grips you throughout. He brings big scale spectacle and marries it perfectly to a personal, intimate character study of one man. The end result is one of the best movie-going experiences of the year, and easily the best sci-fi of 2015.

Matt Damon does a sensational job leading the line here. His performance is both spectacular and nuanced, exploring a man who faces obstacle after obstacle and continues to persevere. It’s also a testament to the achievements of the actor that The Martian comes in as such an enjoyable experience. Despite the tension The Martian is a funny movie and Damon really does well with these elements too, proving that you can make an intelligent sci-fi movie that isn’t afraid to explore the lighter moments. You instantly root for Watney and are with him every step of the way. That success is squarely down to Damon.

Jessica Chastain, Jeff Daniels, Sean Bean, Chiwetel Ejiofor, Michael Peña and Kate Mara are just some of the accomplished support along for the ride too and each of them adds something new and exciting to the story. Daniels has the most interesting supporting character though. He plays a man who is stuck between a rock and a hard place, who is constantly forced into making the tough calls. Donald Glover is also excellent in his cameo role as a young engineer who has a grand plan to save Watney.

The Martian is blockbuster escapist fun coupled with a clever, intelligent approach. It’s rare to get such depth and emotion out of a big scale project but Scott and company have done a sensational job in making The Martian a complete success.

Watch the trailer for The Martian below: