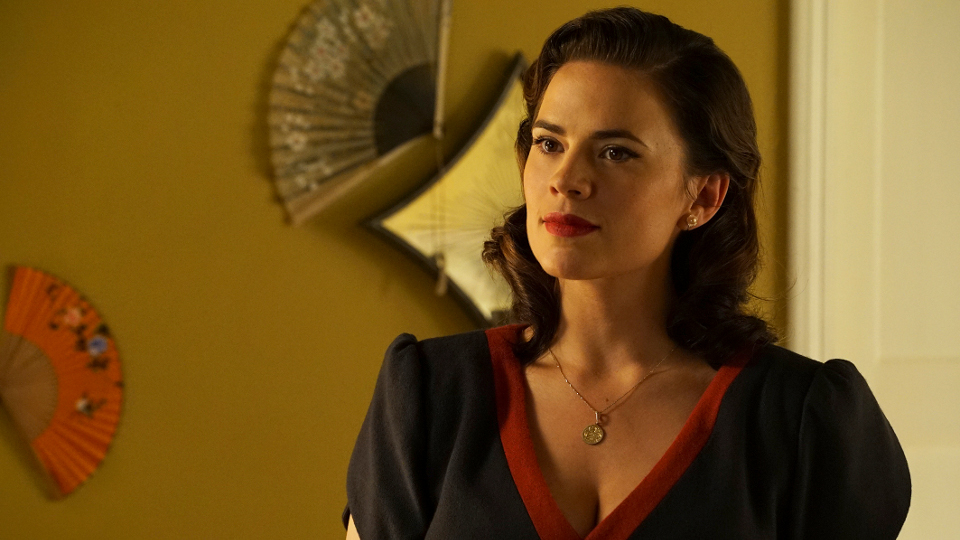 While US viewers of Agent Carter were treated to a double bill to kick off the new season, here in the UK we had to wait a whole week to see the second episode.

Still set in LA the episode followed Carter (Hayley Atwell) as she continued her murder investigation. She again enlisted the help of Isodyne scientist Dr. Jason Wilkes (Reggie Austin) who set up a secret meeting with her at the Dunbar Hotel. There he disclosed some information to Carter before taking her to the local Observatory to show her a film reel he’d stolen from Isodyne. The reel was a recording of secret nuclear tests they had performed including one that had gone wrong.

The explosion appeared to create some kind of rift which sucked surrounding test personnel and their vehicles inside. It also left behind a strange substance known as Darkforce or Zero Matter. At the end of the first episode we saw Wilkes watching over a chamber that contained a large sample of the substance. In this episode we learn that it’s able to feed off local energy or almost anything it comes into contact with. Isodyne have found a way to contain it but Carter decides they must steal it to keep it safe.

The series handles sensitive issues well and this episode it touched on the Racism that Wilkes would have faced in the 40s. This was shown with the location of his meeting with Peggy and also his reluctance to go against his employer. Another issue this episode touched on was sexism. We saw Whitney Frost (Wynn Everett) having to put up with the sexist comments by her director about her age, how she looked and of course her weight.

After a shootout at the Observatory Carter and Wilkes went ahead with their attempted theft. While Carter took out a whole group of guys, Wilkes went to steak the Zero Matter. There he was confronted by Frost who tried to take it off him at gunpoint. A struggle ensued and the container holding it was dropped releasing the dangerous substance. This led to an explosion and the apparent deaths of Frost and Wilkes. Despite only knowing Wilkes for a short time Carter was devastated and the pair definitely had chemistry.

Elsewhere in the episode Sousa (Enver Gjokaj) was planning to propose to his new girlfriend. He abandoned it though when Mr. Jarvis (James D’Arcy) alerted him to Carter being in trouble. The time gap between the two seasons gave time for Sousa to start a relationship but it’s clear he has feelings for Carter. Mr. Jarvis continues to bring much hilarity to the show as does the addition of his wife Ana (Lotte Verbeek).

At the end of the episode it was revealed that Frost survived and it looks like she has somehow absorbed at least some of the Zero Matter. It will be interesting to see what effect it has on her. We’re also wondering what happened to Wilkes.

The third episode of season two is Better Angels. Peggy’s search for the truth about Zero Matter puts her on a collision course with her superiors as Howard Stark (Dominic Cooper) barnstorms in.