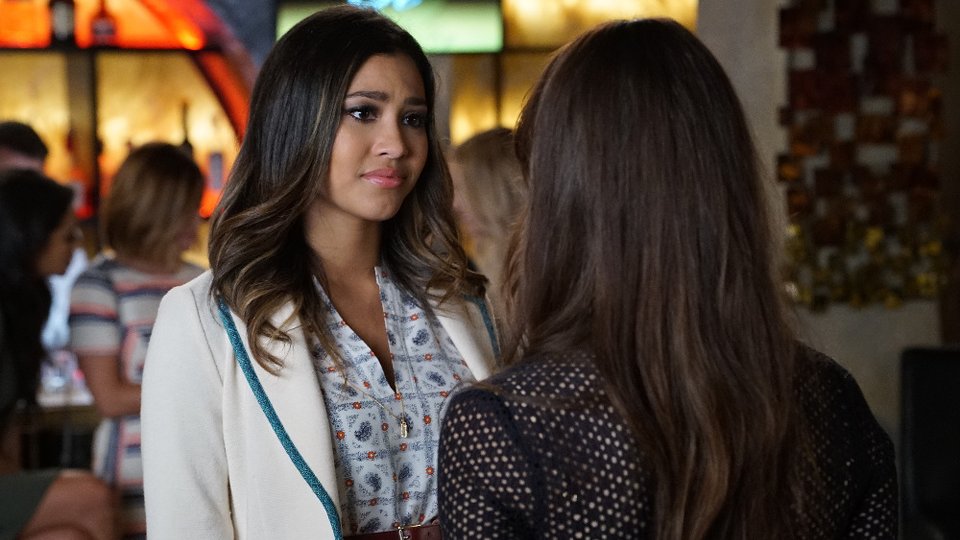 The Liars discovered that someone close to them, that isn’t Ezra (Ian Harding) could have had a hand in Charlotte’s (Vanessa Ray) murder on the latest episode of Pretty Little Liars.

If you haven’t seen the episode and don’t want any spoilers we suggest you stop reading now. If you have seen it and want to relive all the action then keep reading.

Ezra was nowhere to be seen on this week’s episode and according to Sabrina (Lulu Brud) he had done one of his regular disappearing acts. When Lorenzo (Travis Winfrey) announced that a 9 iron was the weapon used to murder Charlotte, Aria tried (and failed) to sweet talk Sabrina into letting her into Ezra’s apartment under the guise that she needed the next pages for his book. Sabrina refused worried that her job would be on the line if she gave Aria access.

Determined to get into Ezra’s apartment, Aria enlisted the help of a reluctant Emily (Shay Mitchell) who got her flirt on with Sabrina to distract her while Aria took the key. The plan went swimmingly and Aria gained access to Ezra’s apartment discovering that his 9 iron was still in place meaning he couldn’t have used his own club to murder her. As she was about to leave she noticed he had messages on his answerphone and was shocked to find one from her father Byron (Chad Lowe) who asked Ezra to meet him so he could explain something that went down the night of Charlotte’s murder.

Ezra relayed the information to Emily and then went back to the Montgomery house to talk to Byron. His car was in the drive but he was nowhere to be found. Aria called him and was surprised when he hung up on her but a cutaway revealed to viewers that Byron was in a car with someone and he suggested Aria ‘knew’. What exactly he thinks she knows is unclear but I suspect it’s nothing to do with Charlotte’s death. Aria recalled hearing her parents arguing after Byron found out Ella (Holly Marie Combs) had visited Charlotte to understand why she tormented the Liars. Byron said he would refuse to let Charlotte roam the streets free leading Aria to think he may have committed the murder.

Realising that Byron’s clubs were in the boot of his car, Aria searched for her spare keys while Emily waited downstairs being watched by a creepy old man through the window (more on that later). When Aria finally located her keys, Emily had left to return Ezra’s key (which Aria forgot she still had) but was caught by Sabrina. Aria went to the car to discover the 9 iron was missing. She confided in her friends that Byron may have had something to do with the murder during Spencer’s (Troian Bellisario) latest campaign appearance for Veronica (Lesley Fera) but Emily was adamant that the real culprit was Sara Harvey (Dre Davis). Byron called Aria telling her he needed to speak to her immediately and on her own.

Hanna (Ashley Benson) decided that honesty truly was the best policy this week as she came clean about erasing the security footage. First she told Ashley (Laura Leighton) who was furious and told her that they have an offsite security firm that does backups so the police would still access the tape eventually. Hannah asked if they could get hold of the backup but Ashley refused to help. Then Hanna came clean with Jordan (David Coussins), who reacted with more understanding than most people would. His solution was to contact his father and get Hanna a lawyer.

In between prepping for a meeting with Lorenzo, Hanna sneaked in to Ashley’s office to find out if Ezra or Byron were staying at The Radley, after the girls had seen Byron getting into the elevator at the hotel earlier. The records didn’t have either of them booked as guests but Hanna noticed that Sara had a ‘do not disturb’ notice on her room even though she left town for a couple of days.

Hanna met with her new lawyer who advised her not to come clean to the police as they had no way of proving she was the person that erased the security footage. Jordan pressed her for any more information she could give and Hanna chose to not tell him about the latest string of messages from A fearing that she may put his life in danger. At the police station Hanna was released before she was questioned and her lawyer informed her that the backup tape had gone missing. Turns out Ashley sorted out that problem and had the drive with the recording in her handbag!

Spencer and Caleb (Tyler Blackburn) dealt with the morning after their hook-up in spectacularly awkward fashion. Caleb went to see Toby (Keegan Allen) to tell him about the burgeoning relationship, and it was quickly established that Toby’s new girlfriend Yvonne (Kara Royster) is the daughter of the opposition in the election. Toby didn’t react all too well to the news of Caleb and Spencer’s hook-up and Spencer was struggling with feelings of her own when she found out from a file on Yvonne that Toby was planning to propose.

Toby chickened out of proposing to Yvonne, something Spencer noticed when she bumped into them on the street. Yvonne was warm and friendly towards her but their conversation was cut short when Yvonne ran off to deal with a parking ticket. Also someone was taking photos of Spencer as she read the file on Yvonne outside of the Brew. Who could it be?

Spencer visited Toby to talk to him and was greeted with the cold shoulder as Toby packed up his truck in a bid to go camping. She talked him out of it saying he should be there for Yvonne and he agreed to stay but told her she had no say in his life any more. Shortly after a public appearance for Spencer and Yvonne, who were holding a talk on getting young people to vote, was a success and the two women hit it off.

Who is the new A?

That was the question on everyone’s lips this weeks. Hanna replied to the message the Liars received and A confirmed that it was someone they knew. Emily firmly believed it to be Sara and in an attempt to find out A’s identity Spencer enlisted the help of Caleb. He pinpointed where the messages came from and took Spencer to the location. They found a bin with A’s old costume in and a phone that received a message telling them A was hiding in plain sight. The old creepy man that was spying on Emily, was shown to be working at The Radley and he left the hotel, got into a limo (that looked a lot like Sara’s) and took off his mask. Who was under that mask? That’s anyone’s guess at the moment!

Pretty Little Liars continues Tuesday 8/7c on Freeform in the US and Wednesday on Netflix in the UK. Watch the promo for next episode Do Not Disturb below: