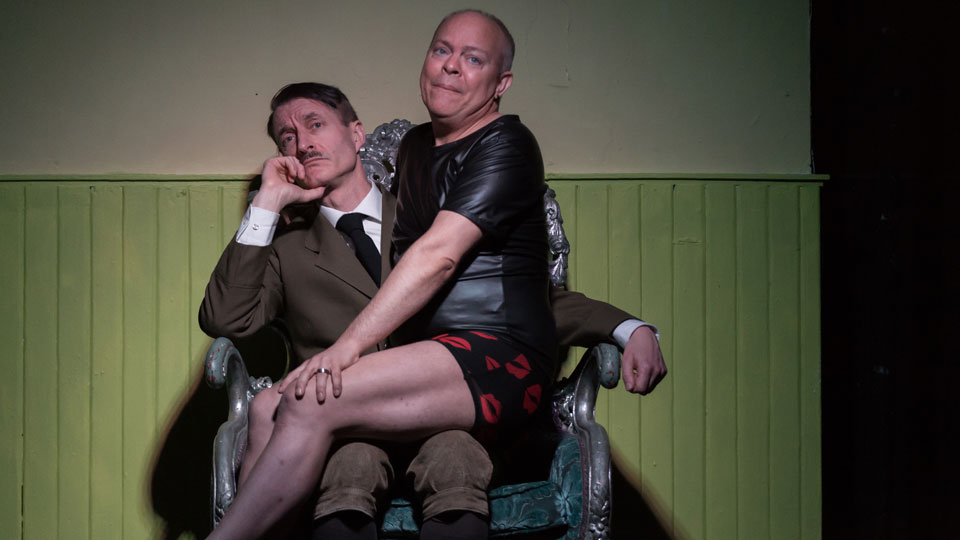 After a failed suicide attempt, a pre-war Adolf Hitler awakens to find himself in the Big Brother house. Following a successful run at the 2014 Fringe Fest, writers Hew Rous-Eyre and Max Elton have re-developed Big Brother Blitzkrieg and brought it to the King’s Head Theatre in London.

There’s often a danger with high concept plays to never move beyond waving a ‘look how funny our idea is’ flag in front of the audience’s face. No one is forcefully waving that flag in Big Brother Blitzkrieg; it’s fluttering naturally in the ramifications of the play’s events. To escape the metaphor: Hitler in the Big Brother house is used as a springboard for further tensions and discoveries. In a world where Donald Trump, ex-host of reality TV show the Apprentice, is running for president, there are enough parallels with various points in history to derive social commentary and question whether we have changed our perception of eccentric personalities.

Hitler is played by LAMDA graduate Stephen Chance. He encapsulates the manic authority that we would expect from the Führer, but also at times an unexpected campness, brought about by the unusual environment which he has found himself in. One of the most commendable aspects of the show is that it does not labour too much over the specifics of how he came to be in the house – some writers may have spent half the script having Hitler trying to work out how he got there, but BBB accepts that this realism is unnecessary with such an outlandish premise, and after a few minutes the narrative is allowed to continue.

The main body of the play consists of Hitler’s evolving relationships with the other five housemates, who live in a world where Adolf Hitler is not a historical figure. You don’t have to be a Big Brother aficionado to recognise the stereotypes:

Lucy (Jenny Johns) is a middle-class PR consultant for a leading pharmaceutical company. She and Hitler have an interesting relationship –her career opens his eyes as to a way of controlling the opinions of the masses, and she has finally found a housemate she considers worthy of her conversation. Said pointedly to the diary room camera: “If I were my husband, I’d be worried right now.”

Actor Kit Loyd fills the theatre with his portrayal of an Essex lad and wannabe rapper who goes by the name of M-Cat. Although his character is perhaps not as well-developed as the others, Loyd brings BBB more comic relief (as if it needed it) in his delivery of many of the play’s funniest lines.

Felix (Neil Summerville) is the house gay. Mainly seen wearing ball stranglers, Felix has seen all 16 series of Big Brother and all 17 series of Celebrity Big Brother – he knows his role. Hitler describes him as “one of the most entertaining sub-humans [he’s] ever met”, and shockingly, that’s as far as his homophobia goes. Maybe he didn’t want a repeat of the recent Winston McKenzie backlash. However, that’s not to say he doesn’t have some prejudice to go around…

Tracey Ann Wood plays Rachel, who is the victim of Hitler’s persecution from the moment he arrives in the house. She’s the thankless mum, cooking and cleaning to a standard that is regularly challenged, and it soon becomes popular opinion that she’s just boring. Plus she’s Jewish – the food has to be Kosher… things can only go one way.

Although the play revolves around Hitler, the characters are developed enough to partake in interesting scenes without any involvement from him. But ultimately we’re waiting for the next moment he scolds the Big Brother voice for interrupting him or calls Rachel a “spineless parasite” for not undressing and jumping into the pool during a house task – he leads his team, the Übermenschen, as if they were at war.

The play’s ending seems somewhat unfounded within the story, but carries a symbolism that’s hard to ignore. When you consider the irony in some of Hitler’s lines, such as “you cannot hold me against my will”, it’s clear Rous-Eyre and Elton spent a lot of time constructing parallels in their script to ensure BBB is a play which has something to say. Hitler and Big Brother have both been used satirically before, but in this instance the combination is one which makes you think while you’re laughing.