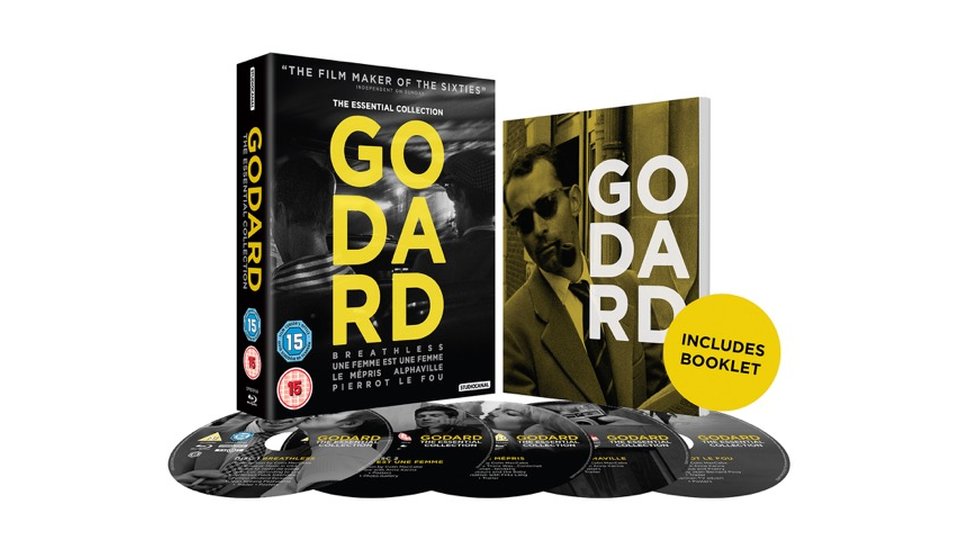 Jean-Luc Godard The Essential Blu-ray Collection will be released by Studiocanal on 1st February 2016.

One of the leaders of the French New Wave, Godard was a key influence on the American cinema of the 1970s. The boxset features Breathless, Le Mépris, Pierrot Le Fou, Alphaville and Une Femme est Une Femme plus over six hours of extras material including brand new interviews with Anna Karina and a booklet featuring essays on each film from critics and directors.

The boxset arrives in the middle of the BFI Southbank season dedicated to the iconic director, which began on 1st January and runs to 16th March 2016.

Find out more about each of the films in the boxset and the extras for each:

Stylish and sexy, Breathless [À Bout De Souffle] is the epitome of cinematic cool. A fast tale of a young man on the run in Paris at the end of the 50’s, Breathless shook up the film world upon its release and has made a lasting impression on cinema history. Starring Jean Paul Belmondo, the film was produced by Godard from an original treatment by François Truffaut in a production that united the four initiators of the ‘Nouvelle Vague’ – Claude Chabrol acted as artistic director while acclaimed director Jean Pierre Melville appeared in front of camera.

Angela (Anna Karina) is a stripper living in Paris with her husband, Emile (Jean-Claude Brialy), who is a bookseller. She wants a child, he doesn’t. Emile’s obsession with cycling interferes with the love of his wife. Angela embarks on a dangerous game to try and reignite Emile’s passion for her, by involving Alfred (Jean-Paul Belmondo), a good friend of theirs, in her quest for a baby. Alfred is in love with Angela and, it seems, more than willing to be the third corner of his love triangle. Written and directed by Godard, the film was his second, winning both him and his wife Anna Karina awards at that year’s Berlin Film Festival.

Paul Javal (Michel Piccoli) is hired by an American producer Prokosch (Jack Palance) to commercialize director Fritz Lang’s adaptation of The Odyssey, about to begin shooting in Rome. Whilst attempting the rewrite in Capri, Javal’s wife Camille (Bardot) spends an unexplained hour in the company of Prokosch, possibly at the behest of her husband, although this is never made clear. This sets off an argument between the couple that hints at deeper problems within the marriage and the contempt Camille feels for her husband.

Based on Lionel White’s novel Obsession, Pierrot Le Fou is the story of a bored husband who runs away from Paris to the South of France with an unpredictable but beguiling young babysitter (Anna Karina) after a corpse is found in her flat. After an idyllic time at the seaside they hit the road once more and get by from stealing, soon becoming embroiled in the machinations of two rival gun running gangs and a man who may or may not be the girl’s brother. Belmondo was nominated for a BAFTA for his perfomance in this tragic tale of a romantic couple who cannot escape fate no matter how far they flee.

Written and directed by Godard, Alphaville is the strangely beautiful futuristic tale of Lemmy Caution, an American private eye sent to a planet ruled by Von Braun, a malevolent scientist who has outlawed human emotions in favour of logic. The film deals with the fight between indivualism in face of inhumanity and blind conformity, and won the Golden Bear award of the Berlin Film Festival in 1965.