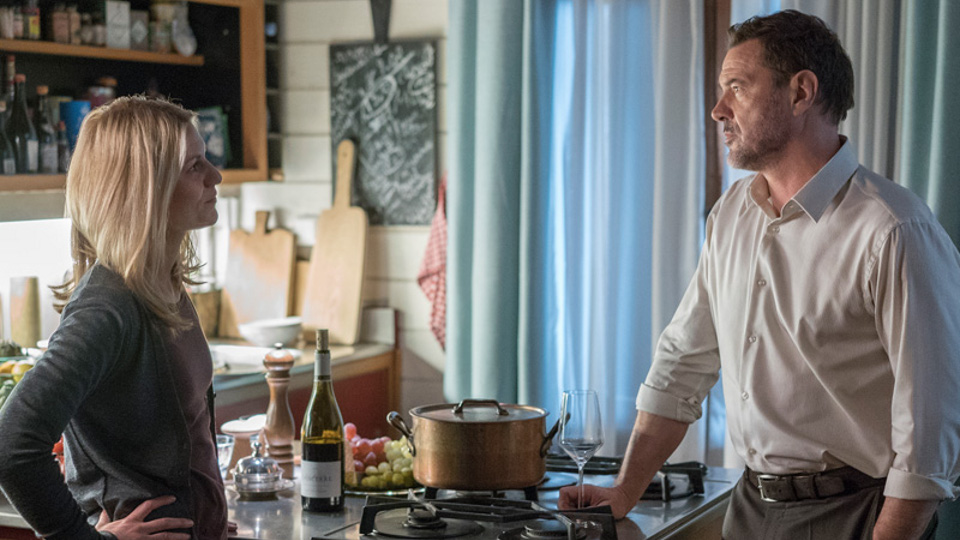 In the penultimate episode Carrie (Claire Danes) went all out to try and prevent the terrorists executing their sarin gas attack on Berlin. She was the only one not fooled by the scheming Allison (Miranda Otto) and the episode ended on something of a cliffhanger as she made her way into the subway tunnels.

If you’re not up to date with Homeland and like to avoid spoilers we suggest you don’t read any further.

The finale picked up where we left off as Carrie, gun drawn, crept through the tunnel towards the sarin gas bomb. Before she made it to Bibi and the bomb she was stopped by Qasim. He was having second thoughts about the plot but didn’t know how to stop his cousin Bibi.

Carrie tried to give him her gun and pleaded for him to put an end to Bibi but Qasim didn’t want to hurt his cousin and thought he might just go and talk him out of it. As he approached Bibi was getting ready to release the sarin gas manually. Qasim tried to talk him out of it by saying the police had found them but Bibi wouldn’t be swayed. Instead he put a couple of bullets into Qasim.

Bibi then donned his gas mask and prepared to release the gas as the train closed in. Just in time Carrie was able to fire off a few bullets which killed him. After the train passed a relieved Carrie held Qasim in her arms and comforted him as his life slipped away.

Back outside Saul (Mandy Patinkin) turned up to see how Carrie was. It had all been a bit too much for Carrie and she decided to just head home. Once back in Jonas’s apartment she had a quick look around, stopping briefly in Franny’s room before taking herself off to bed. Later Jonas returned and it looked like things might be ok between them. However Jonas had made up his mind and broke-up with Carrie.

Carrie headed to the hospital to check in on Quinn’s (Rupert Friend) progress but found an empty bed. The scene looked a little chaotic and it was because Quinn had been rushed to surgery due to a massive brain hemorrhage. Unable to do anything to help Carrie took herself to the hospital chapel to wait and pray.

4 days later Quinn was still in bad shape. The doctors told Carrie that it had been a really bad hemorrhage and that if he eventually recovered he was certain to have some degree of brain damage. Dar (F Murray Abraham) gave Carrie a letter that Quinn had written to her before going to Syria. She was only meant to read it in the event of his death.

Instead of lots of things being fixed for Carrie the episode was all about change and choices for her. Her decisions set up the path for season 6 nicely. With the terrorist plot defeated, Jonas out of the picture and Quinn near deaths door she found more choices to make.

Saul had an offer from the CIA director agreeing to let her come back. The offer also granted her the freedom to choose her own missions and team. An attractive offer that Carrie of old would have jumped at. However she turned him down much to his frustration.

Otto During also had a surprising offer of his own for Carrie. She was expecting him to offer her job back but instead he all but proposed. He asked that she take some time to think about it.

Elsewhere in the episode the BND moved on Laura in the hope of recovering the leaked CIA documents. Laura wanted her hacker friend, Numan, to leak them if anything happened to her but the BND also apprehended Numan. The threatened to send him back to Turkey where he would be executed unless Laura complied with their demands. This saw her go back on TV to tell a pack of lies in order to protect Numan.

Saul was desperate to catch Allison so put the pressure on Ivan. Realising he had nothing left to fight for Ivan agreed a deal to go into witness protection in exchange for information on how to stop Allison leaving the country.

Allison had been spending time at a Russian safehouse where she was receiving medical treatment for her self-inflicted gunshot wound. When it was time to leave she was put in a car boot. However before reaching her destination the car was intercepted by Saul and his team. Instead of capturing her his team were ordered to pepper the car with bullets and Saul opened the boot to see her bloody bullet-riddled body.

The end of the episode saw Carrie return to Quinn. She blocked the door, removed his monitor and then looked ready to end his life. At that moment sunlight came through the windows and we were left wondering if she went through with it or not.

Homeland returns for a sixth season in 2016.